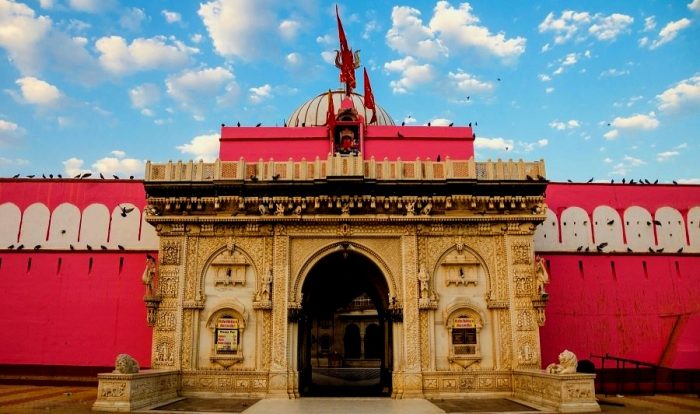 India is popular for strangest culture and exotic sights. Deep down in the far villages of Thar desert, a small village of Deshnok is located. It is not only miraculous but also exciting. The Karni Mata Temple has a number of astonishing facts hidden inside it.

Being a significant Hindu sanctuary, a number of devotees regularly rushes in and out of its premises. Located 30 km from Bikaner, it holds a capacity of almost 25000 rodents or mice. mythology has it that these mice are the generations or next birth of Charan wansh.

Inside the sanctuary, the floor slithers and hops. Sketchy first-time guests explore floats of hiding, which spread the marble underneath. The started to advance toward a holy place at the focal point of the sanctuary, where they make contributions to the several rodents dashing around the foot of a silver statue of Karni Mata.

Conceived as ‘Ridhu’ in Suwap town of Jodhpur, ‘Karni’ was the 6th offspring of Meha Ji Charan and Deval Bai. In her initial years, she started to display her perfect powers through ‘supernatural occurrences’ consequently, the name ‘Karni’ which means making everything conceivable.

Karni Mata additionally alluded to as Nari Bai was a Hindu warrior sage. Also known as the incarnation of maa Durga, Karniji Maharaj carried on a plain lifestyle. Her life was full of sacrifices and devotion. In her respect, a temple was build for her after her secret vanishing.

In 1538, Karniji paid a visit to Maharaja of Jaisalmer. On 21 March 1538, she went back to Deshnok with her stepson, Poonjar, and a couple of different devotees. They were close to Gadiyala and Girirajsar of the Kolayat tehsil in the Bikaner region when she approached the train to stop for water. After this, she vanished there at 151 years old.

The mythology of the temple

The Rajputs likewise treat her as their ‘Kuldevi’. Territorial rulers and heads of towns visited her to look for endowments to win quarrels, overcome adversaries and hold their positions.

Laxman, Karni Mata’s stepson, suffocated in a lake in Kapil Sarovar in Kolayat Tehsil while he was endeavoring to drink from it. Karni Mata entreated Yama, the divine force of death, to restore him. At first, Yama refused to agree. But later, he blessed that the coming offsprings with Laxman will be rebirth as mice.

The story behind rodents at the sanctuary is diverse as per some nearby old stories. As indicated by this form, a 20,000 in number armed force left a close by the fight and came racing to Deshnoke. After learning of the wrongdoing of departure, deserving of death, Karni Mata saved their lives yet transformed them into rodents and offered the sanctuary as a future spot to remain.

Karni Mata Temple is an unordinary sacred holy place of India (Deshnoke, Bikaner – Rajasthan). The sanctuary is devoted to Goddess Karni, who is viewed as the manifestation of Maa Durga, the goddess of intensity and triumph. In the fourteenth century, Goddess Karni is said to have lived and performed numerous supernatural occurrences during her reality.

A tribute to Karni maa

Maharaja Ganga Singh of Bikaner built the Karni Mata Temple in the late Mughal style in the twentieth century. Kundan Lal Verma of Hyderabad based Karni jewelers upgraded this pure sanctuary in 1999. He provided the temple with silver doors and marble carvings.

The picture of Karni Mata is 75 cms tall, decked with a mukut (crown) and a laurel of blossoms. In the region of the gaps in premises, one can see rodents occupied with various exercises. Nonetheless, it isn’t the design of this sanctuary that draws in travelers; it is a great many rodents that occupy it.

Exceptionally enough, these rodents don’t chomp the barefooted pioneers who enter the sanctuary. Or maybe, they quietly play with them, eat with them, go around them, and sit on their laps – which the enthusiasts consider to be the invocation of the Goddess. A fascinating actuality is that these rodents never leave the sanctuary despite the fact that they don’t have permission to do as such.

Evidently, in any event, during the most noticeably terrible of the plague, the town of Deshnoke was not influenced. Admirers make journeys to the Karni Mata Temple not exclusively to love the rodents, however, to likewise recuperate their afflictions.

The most committed adherents drink from the bowl the rodents wash and play in, before eating the scraps they abandon. Some even rest in the sanctuary, giving the rodents a chance to slither over them during the night. Love birds visit as a feature of their wedding function. Few individuals even call the sanctuary home.

These were the major details about the Karni Mata Temple. Also, you may like to read about Tirtha Sthan- Most Popular Indian Pilgrimages.

Consult the best Astrologer of India for Horoscope and Kundli Predictions.

Vedic Remedies in Astrology- A Benediction to Cease the Problems
Views: 4152