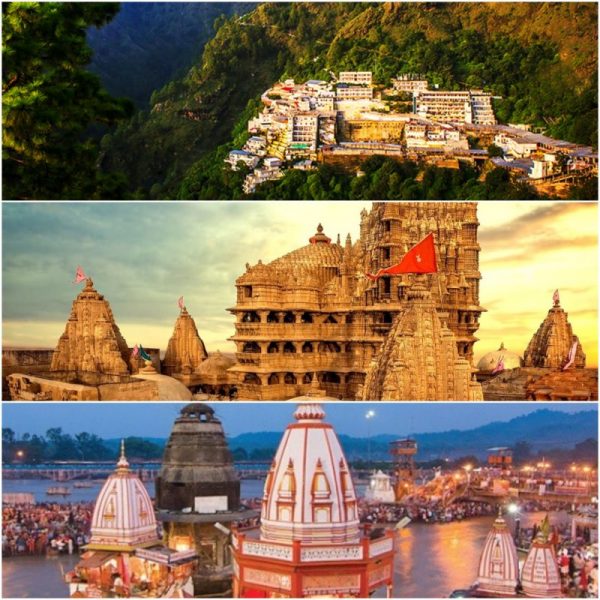 Tirtha Sthan, Pilgrimage, Spiritual enlightenment, peace, and salvation share a significant portion of the Indian culture. India stretches the diversity of culture as wide as its geographical area. Also, here, the foundation & cultural values of all the regions and religions tower up any other phenomenon.

India has a majestic heritage of tradition. In addition, not only its chasmic culture but also a number of annual religious journeys have massive admirers all across the globe. To illustrate, the global star Sylvester Stallone aka Rocky lost his son Sage in the year 2012.

Further, he kept seeing him after his tragic death. Upon this, he talks to a Vedic Scholar in Haridwar and sends his family to perform the “Shraddh” of his son. Further, the actor only talks about how much he respects the Indian traditions.

Thus, whether it a joyous occasion or an instance of grief, it has significant meaning in the Indian culture. Equally important, India draws huge popularity among numerous powerful & beautiful countries because of its diverse culture, festivals, and celebrations.

Also, the country celebrates each festival with great zeal and people from various different communities participate vigorously to make the occasion vibrant and blissful. Not only the religious occasion and holy places, but the religious pilgrimages have a great connotation.

So, read on the most voguish holy pilgrimage of India or bharat ke pavitra tirth sthal-

Nesting among the mesmerizing scenic beauty and height, the Charm Dham is a set of four holy abodes. The Char Dham Yatra is the sacred journey of four shrines Badrinath, Rameshwaram, Dwaraka, and Puri.

The Charm Dham holds not only the belief of people but also a huge tourism value to the Indian heritage and tradition. Thus, the Indian Government takes special care to preserve the milieu & beauty of these places.

Also, the best astrologers of India mention on the basis of their studies of Hindu Mythology & Veda, the definition of the Yatra draws roots from the writings of Adi Shankaracharya. He sets the four holy abodes of God in four directions.

In accordance with Vaishnavism, the Char Dham Yatra is a channel to achieve “Moksha”. Hence, a person must visit the Char Dham once in their lifetime. The four shrines have a great distance from one another.

As mentioned above, the pilgrimage of Char Dham includes visit of four places.

The east direction dwells Lord Vishu. Shree Jagannath Puri temple devotes to Lord Jagannath, the incarnation of Lord Vishnu. Besides being one of the important destinations of Char Dham Yatra, the temple observes great enthusiasm on the occasion of Puri Rath Yatra.

In earlier times, the city has the name Kushasthali. Dwaraka is the birthplace of Shri Krishna. Here, devotees pray Lord Krishna in the temples.

According to Bhagavata Purana, the sage Nara-Narayana resides in the Badrinath temple. The sages are an incarnation of Lord Vishnu. Thus, the temple of Badrinath is also popular as the Badrinarayan temple.

The temple draws roots from the ancient period of Lord Rama. According to the sacred writings, the Jyotirlinga was formed by Lord Rama to pray Lord Shiva.

The pilgrimage of Vaishno Devi devotes to the “Adi Shakti” Goddess Durga. Mata Vaishno Devi Mandir is one of the significant temples and Tirtha Stan of India. The temple of Vaishno Devi sets in Trikuta Mountains in the mesmerizing Shivalik Hill Range of Jammu and Kashmir.

Vaishno Devi Temple is the holy cave of Goddess Durga. Moreover, the temple draws popularity because it is one of the 108 Shaktipeeths.
The legends of Vaishno Devi associate in the Treta Yuga.

At the same time, the world feels the overburden of demonic existence and cruelty. Each year, devotees flood in the temple seeking the blessing of the highest deity of Hinduism.

Mata Shakti denotes a thrilling splendor in the red dress. She has eight arms that hold the bow, arrow, trident, mace, sword, lotus, and Abhaya motion. In the Hindi language, the word “Maa” means the Mother. As a consequence, the word Maa is used for mothers which has a connection with Goddess Durga.

This Tirtha Sthan is also popular as Sherawali Maa, Vaishnavi, Trikuta, and Mata Rani. In point of facts, Vaishno Mata is a form of Shakti or Parvati. Also, the temple is the second most visited temples of India. With a momentous belief, devotees visit the temple.

However, the noteworthy information about the temple is the cave and the worshipping the idol of Durga Maa. Nonetheless, the place observes a great number of devotees each visit the Ardh Kuwari Cave, in the midway on the old path to the Bhawan.

The Yatra compromises a trek of 13 km to reach the cave of Durga Maa. There is an ever-increasing number of visitors every year. In the year 2018, the Vaishno Devi temple observed over 85 lakhs devotees.

In addition to the details mention in the very beginning, Haridwar or Hardwar is a holy dwell of God. Haridwar is one of the most talked-about Tirtha Sthans of India. The city locates in the valley of Uttrakhand.

Besides being a popular Tirtha Sthan, Haridwar is one of the most ancient places in the country. The place originates in the Godly era when Lord Shiva releases River Ganga from his hair.

The river flows for 253 km and enters the Gangetic plain for the very first time in the ancient name Gangadwara.

Hardwar or Haridwar or Gangadwara is one of the seven holiest places of Hindu i.e. Sapta Puri. It is one of the most popular religious stops.

Each year, people in a great number visit Haridwar for spiritual growth by visiting the Panch Tirtha (5 pilgrimages).

In accordance with the previous words, the spiritual trip to Haridwar concludes with the visit of 5 places. The Panch Tirtha Sthan is as follows-

The Chandi Devi Temple locates atop the Neel Parvat, Sivalik hills. This temple is one the foundation of Adi Shankracharya, the greatest priest of Hindu religion. Thus, the darshan (religious visit) of the Chandi Devi Mandir is has a significant meaning for the Hindus.

It is a Ganga Ghat which is also one of the holiest ghats of India. Har Ki Pauri holds the belief of people that this is the place where the holy river Ganga enters the plain from the mountains.

Each year, thousands of people visit Haridwar to take a dip in the ghat of Har Ki Pauri. They believe it adds to their “Punya” (virtue) in their lifetime.

This place doesn’t receive the due credit for both the beauty and historical significance. Kushwart is also popular as Kankhal. It is one of the Panch Tirtha of Haridwar.

Moreover, the place is typically famous for Daksheswara Mahadev Temple.

The Maya Devi temple enshrines the divinity of Adhisthatri. It is one of the Shaktipeeth in India. Also, the history of the temple shares interesting stories.

In point of facts of Hindu Mythology, Goddess Maya Devi is a deity with three heads and four arms. In addition, the temple is a Siddh Peeth. Devotees believe the Goddess fulfill all their wishes.

The Mansa Devi Temple locates atop the Bilwa Parvat, Sivalik Hills in the southernmost mountain string of the Himalayas. Here, the temple devotes to Goddess Mansa Devi. It is also popular among the devotees with the name of the Bilwa temple.

The cultural value of India doesn’t limit to one direction or any specific Tirtha Sthan. People around the corners have tremendous respect towards the Hindu culture that draws them to pay a visit to these pilgrimages and holy dwellings.

However, our Astrologers mention, God lives in all the good expressions and generous deeds.

In addition, a person may have the best part of their life meanwhile the voyage. Besides the spiritual journey, the above-mentioned places have uncountable gorgeous natural scenes, adventure sports, and excursion to make the trip memorable.

These were the major details about the Tirtha Sthan. Also, you may like to read about Amarnath Yatra.