Nine Avatars of Durga and Planets they Control 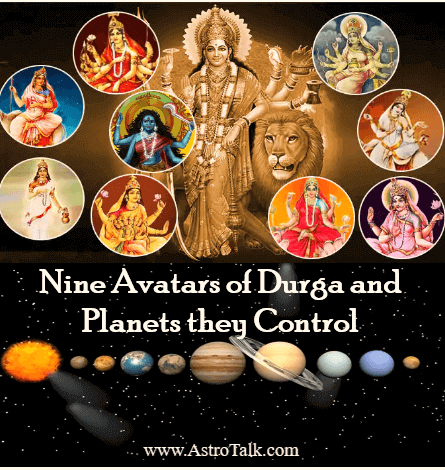 Maa Durga created this universe out of her Shakti, herself. In fact, according to Geeta, she is the greatest Goddess of the universe. Similarly,  acquires a similar place to Lord Krishna in Vaishnavism.

As said by Skand Puran, the goddess Parvati took up the name “Durga” because she killed the monster- demon, Mahishasura.

In order to rescue Sita, Ram had to appease the deity Durga for her help in the battle. As instructed, Hanuman flew to Debidah, the only place where one could find blue lotuses, and brought back 108 lotuses for his Lord Ram because it was all known that he was born with lotus eyes.

His devotion to pluck his beautiful blue eyes as a substitute for the 108th blue lotus made Devi Durga appear in full form before him and stopped him from doing so. Devi Durga granted the power and support to Rama that so could kill the demon and rescue Sita.

Rama had started the puja on the 6th day of Navratri, (Shashthi) of Ashwin and the Goddess appeared before him on the 8th day(Ashtami). Just at the meeting point at the day of Ashtami(8th) and Navami(9th) she entered into Ram’s weapons and gave them required strength to kill Ravana.

Worship Lord Durga in Gupt Navratri can magically transform the life of an individual. These Navratras are not only for ordinary people but also for people related to the field of sadhana and tantras.

Why Navratri is important?

During these Navaratri, the devotee worships to enhance the power of sadhana and tantras especially the tantric pujas are at its peak.
People who believe in sadhna and tantra performs this pooja. So, the process of puja in these days are highly peculiar and unique.

By keeping fasts, and reciting shlokas and mantras, the fans demonstrate their respect for the Goddess.

The 9 avatars of maa Durga.

Worshipping Devi in Navratri results in the strengthening of Sun. It means high authoritative positions in government, including legislative issues, specialists in medicine, and so on.

It makes an individual bold and gives regulatory capacities and gives a square body, great appearance and amazing discourse.

Goddess Brahmacharini is portrayed as strolling on the uncovered feet. She has two hands and She conveys Jap Mala in the correct hand and Kamandal in the left hand.

Goddess Brahmacharini did serious compensation to get Lord Shiva as her significant other. She performed hard gravity and because of which She was called Brahmacharini.

Goddess Chandraghanta mounts on the tigress. She wears the semi-roundabout moon (Chandra) on her brow. But also  Chandraghanta conveys Trishul, Gada, Sword, and Kamandal in her four remaining hands and keeps the fifth left deliver Varada Mudra. She conveys lotus bloom, Arrow, Dhanush, and Japa Mala in her four right hands and keeps the fifth right submit Abhaya Mudra. This type of Goddess Parvati is tranquil and for the welfare of her aficionados.

If you worship maa in Navaratri, Moon is positively affected.
Hence, the moms will have adequate assets and will raise the tyke and build up the kid’s intellectual capacities in a quiet way.

Goddess Siddhidatri rides on the lioness. She is delineated with eight hands. She has Kamandal, Dhanush, Bada, and Kamal in the correct hands and Amrit Kalash, Jap Mala, Gada and Chakra in the left submit that request.

If you worship maa in Navaratri Jupiter becomes solid. Then it indicates the fields of top political and regulatory positions, chairpersons of modern foundations, contractual workers, money related guides, financiers, and so on.

Goddess Katyayani rides on the brilliant lion and portrayed with four hands. Goddess Katyayani conveys lotus blossom and sword in her left hands and keeps her correct submits Abhaya and Varada Mudras.

Worshipping Devi in Navratri results in the strengthening of Venus. Because it indicates stylish sense, common learning, and interests, clairvoyant capacity, intensity.

Goddess Kalaratri composition is dull dark and She rides on a jackass.  Her correct hands are in Abhaya and Varada Mudra and She conveys sword and the lethal iron snare in her left hands.

Although the Goddess Kalaratri is the most brutal type of Goddess Parvati, She favors her enthusiasts with Abhaya and Varada Mudras.

She conveys Trishul in one right hand and keeps the subsequent right turn in Abhaya Mudra. She decorates Damaru in the one remaining hand and keeps the subsequent left turn in Varada Mudra. As the name recommends, Goddess Mahagauri is amazingly reasonable. Because of her reasonable appearance Goddess Mahagauri is contrasted and the conch, the moon and the white blossom of Kunda (कुंद).

Worshipping Devi in Navratri results in strengthening Mercury. Because this encourages the local to be a decent communicator with insight, discernment, creative mind, mind, aptitude, skill, verbal and mental capacity, cleverness, sound judgment, amusingness, and adaptability.

For further details on the puja of Maa Durga, please read: Durga puja