Can A Wife/Girlfriend Tie Rakhi To Her Husband/Boyfriend? 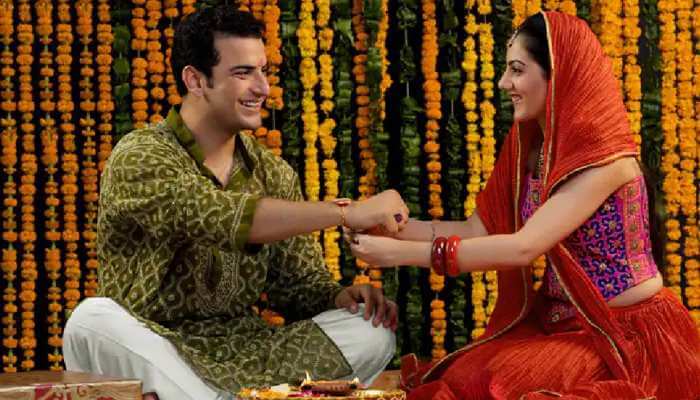 This is a mantra that Vedic sages, back in ancient times, used to recite while making a Vedic rakhi to celebrate Rakshabandhan. If you go on to translate this mantra, it simply means:

I am tying you with the same Rakshasutra (Rakhi) with which Mahabali, Mahadani King Bali was tied. O defense thread, you should not be moving, but remain stable. This rakshasutra can be tied by the priest to the king, by the brahmin to the host, by the sister to the brother, by the mother to the son and by the wife to the husband.

So if wondering ‘Can a wife tie rakhi to her husband?,’ then the answer is – Yes, a wife can tie rakhi to her husband. And why only husband and wife? Rakhi can even be tied by a daughter to her father and also by a couple to each other. This is simply because Rakhi is a thread expressing the promise of protection. It doesn’t go into the relation prospects that the two individuals share. And interestingly, there are many stories to prove this.

The first one is the story of Indra (leader of deities) and his wife, Indrani. Happens, the deities were fighting a war against devils in the Vedic times. The war was not going well for the deities as they were losing. It was then Indra got worried as he knew that if devils win the war, it would not be good for the Earth. So he himself decided to go into the war.

Also Read: Best day to buy broom as per astrology

At that time, Indrani, his wife, got concerned about her husband, and thus prepared an amulet and tied it on Indra’s wrist. As it is said, Indra won the war, and the amulet, since then, came to be known as Raksha Sutra.

This story belongs to ancient times. Everyone is aware of Alexander, the ruler of one of the mightiest kingdoms. After conquering much of Central Asia, Alexander had decided to invade India around 329 BC. However, his wife feared Porus, the king who Alexander was supposed to fight.

Also Read: Which Zodiac Signs Should Wear Gold And Which Shouldn’t

Roxana knew how brave and valiant a warrior Porus was, and thus decided to send him a Rakhi for a promise that he would not kill Alexander on the battlefield. The legend has it that at the time of the Battle of Hydaspes, Alexander did fall in front of Porus and Porus had a chance to kill him. However, he acknowledged the importance of Rakhi and refrained from killing Alexander. Later, Porus lost the war but he was gallantly honoured by Alexander, who was impressed by his bravery.

Another story is from the medieval time when Mughals were trying to set up a kingdom in India. When Humayun was swiping north India, different parts of the country were ruled by different Kings and Sultans. Gujarat, back then, was controlled by Bahadur Shah. The Shah was threatening Chittor with an invasion in order to increase his area of influence.

On realising the same, Rani Karnawati, wife of Rana Sanga, had sent a rakhi to Humayun with a desperate message to protect Chittoor. Though Humayun accepted to help her but the help was late as Shah, by the time Humayun reached, Chittor had been attacked. Karnawati committed jauhar but Humayun made sure that the kingdom is restored to her son, Vikramjit.

These stories prove that the festival of Rakhi knows no bond. Rakhi marks a promise of protection that could be given by anyone to anyone. As we deal with one of the most dangerous threats, i.e. global warming, one can even tie a rakhi to a tree making a promise to save nature, and thus save humanity.