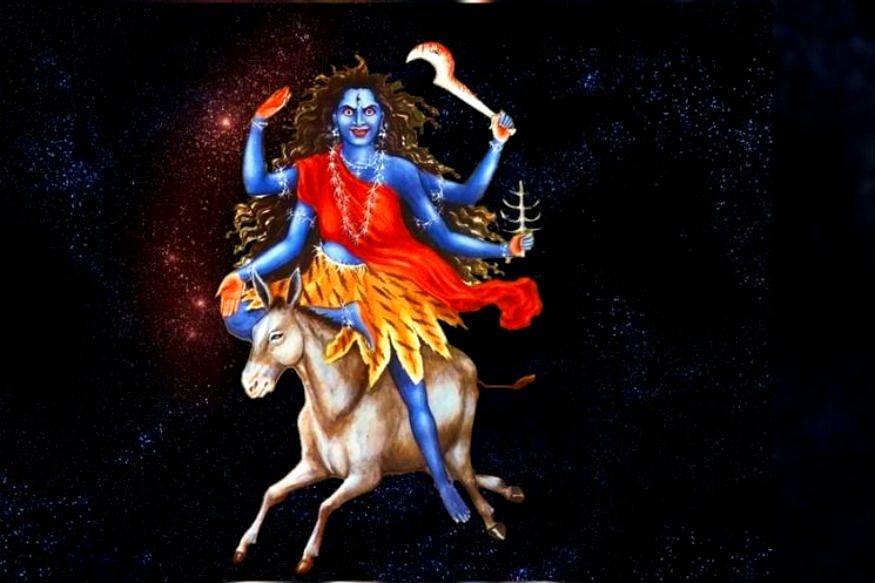 The seventh day of Chaitra Navratri is dedicated to the most fierce incarnation of Goddess Durga. According to the Bhagwat Purana, Maa Kalratri’s form of Maa Durga is worshiped on this day of Navratri. Goddess Kalratri blesses her devotees with auspicious results for worshipping with utmost devotion during Navratri.

Maa Kalratri is has a fierce-looking form. She slaughters evils and bestows peace to the world every time. In Puranas, we also find her mentions in the form of Devi Shubhankari as she endows with prosperity to her devotees. With evils, she slaughters fear of people and removes obstacles from the life of her devotees. On Navratri Day 7, in order to obtain the Goddess Kalratri’s blessing, you must worship her with Ganga Jal, Panchamrit, flowers, Akshat, and jaggery.

The grace and glance of Goddess Kalratri are different than any other goddess in Hindu mythology. She has a ferocious form. She is the warrior, savior, and executioner of all the evils.

As the darkness of cold night, the body of goddess Kalratri’s is black and shadowy. Her breath is like a storm and it gives fire to smoke. The mother’s hair is scattered and her neck shines like a thunder. Hindu Mythology says that Goddess Kalratri is the destroyer of all strength and power in any form.

According to the Bhagwat Purana, Goddess Kalratri’s three eyes are enormous, round like universe, beams are the same as lightning and are mounted with four arms, one has a khadag i.e. sword and another carrying a weapon of iron. And the fourth is in the Vermudra. She rides on a donkey and it is the most diligent & fearless creature. This form of Goddess bestows Riddhi and Siddhi and saves her devotees from the Kaal.

The 7th day marks the worship of Goddess Kalratri. She is the goddess of power and strength. According to mythology, the origin of Maa Kalratri takes place during the fearsome fight of 9 days of Goddess Durga with demon Mahisasura. Further, she slaughters him in the war on the 10th day.

At the time of destruction by the Demon Shumbha and Nishumbha, Goddess Parvati takes the incarnation of Maa Kalratri. When these two demons invade the Devlok and the abode of gods, Goddess Parvati determines to slaughter the asuras. Upon this, she takes the form of fiery, thundering Goddess Kalratri. Later, she slays all the demons and frees Devlok from their fear.

Ritual and Mantra of Navratri Day 7

Goddess Kalratri is also known as Kali Mata. Worship, rituals, and mantras of Devi Kalratri are extremely powerful and helpful for one and all.

By worshiping Maa Kalratri, you may resolve all your resentment. In the morning, like other days, you may worship on Saptami in the same manner as all the 9 days of Navratri. However, at night, the goddess was adorated through special regulations.

Before the beginning of Puja, clean yourself and the worship area. Further, after taking the bath, worship the Kalashdevta and all the gods dwelling in the Kalash. After this, take the blessing of Goddess Kalratri. Further, take flowers in your right hand and offer them in the feet of the God and Goddess. Next, chant Devi Kalratri Mantra while you invoke the Goddess.

The Mantra of Devi Kalratri is as follows-

Also, you may like reading about Nine Days and Delicious Dishes for Chaitra Navratri

Are you undergoing stress and diseases? Book your Durga Saptashati Path today to get rid of all problems this Navratri.

Remedies to Please 9 Planets To Get Rid of Problems
Views: 42786