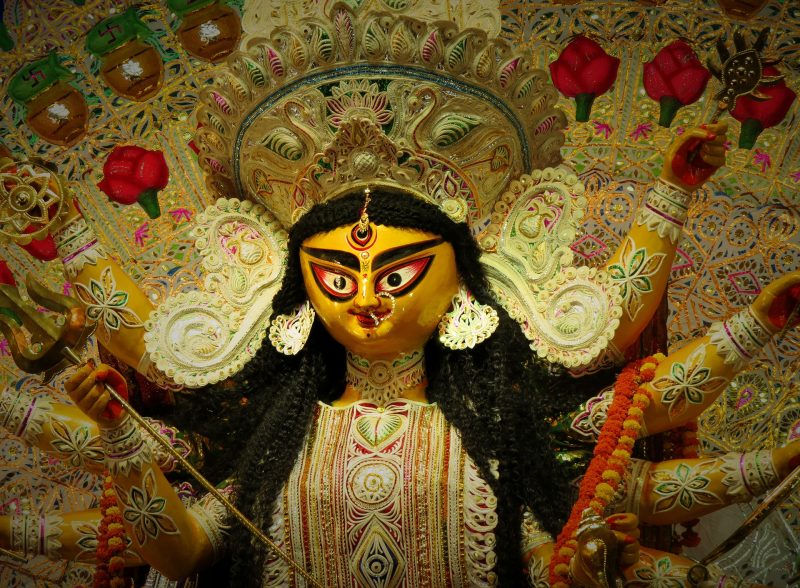 Chaitra Navratri, a nine-day festivity to pray Goddess Durga in Hindu religion. It is an annual Hindu festival that takes place every year in the Spring season. During the 9 days long festival, devotees from all across the world pray to the 9 supreme forms of Durga Maa. The nine consecutive days follow praying to her nine manifestations, chanting their Mythological tales and devotional songs.

Further, read ahead to know the significance of Chaitra Navratri, rituals, and best dishes to eat during the fasting days–

Navratri celebrates the manifestations of divine deity Goddess Durga who has the highest form in Hinduism. She is the strongest feminine energy and Shakti (power) that creates this universe. Thus, the festival holds a great connotation among the Hindu devotees.

The Navratri Puja bestows great prosperity and merit. However, Goddess Durga demands a few rules to be followed strictly by people who seek her blessings. For example, strict fasting without the intake of grain, cleanliness, performing Aarti, reading the Katha for the nine manifestations and keeping the Diya lit for the entire nine days.

The nine forms of Goddess Durga bestow nine qualities strength, joy, harmony, wisdom, commitment, reputation, fame and well-being as a result of the devotion. Navratri is a Sanskrit word that means “nine nights.” As we celebrate the festival for nine nights, we pray to nine manifestations of Goddess Durga that are as follows-

The first day of Chaitra Navratri is dedicated to Goddess Shailputri, the daughter of Mountain. She is the first form of Goddess Durga that takes birth after Sati sacrifices herself. On the first day of Navratri, devotees clean the place of worship, set the Navdurga Worship idols and offering. Furthermore, after lighting a Diya (earthen lamp) with ghee takes place followed by chanting Shailputri Katha and Durga Arti. As a matter of fact, the Diya is lit for the entire nine-days. In addition, Red is the colour for the first day of Navratri Puja.

The second day of Chaitra Navratri is dedicated to Goddess Brahmacharini, another incarnation of Goddess Parvati. She is the unmarried form of Parvati. Devi Brahmacharini is the emblem of peace, fortune, and prosperity. On the second day, devotees chant Brahmacharini Katha and Aarti to seek her blessings. Also, on this day devotees wear blue colour to attract calm and harmony.

The third day of Chaitra Navratri commemorates Goddess Chandraghanta, the symbol of courage. She has a half-moon on her forehead that adds into her beautiful manifestation. According to Hindu Mythology, she opens her third eye when she prepares for war. Thus, people seek her blessings for bravery and integrity. The prosperous colour of the day is Yellow.

On the fourth day of Chaitra Navratri or Chaturthi, worship of Goddess Kushmanda takes place. In Hindu Mythology, she is the governing body of all the creative and artistic forms of the universe. The best Astrologers of India suggest all the people with creative interest to pray to Goddess Kushmanda for blessings. In addition to the grandeur of the fourth day, the green colour is the prosperous colour of the day.

The fifth day of Navratri celebrates the fifth incarnation of Goddess Durga in the form of Skandmata. She is the fearless form of Goddess Durga that rides on a lion with her baby in her arms. This day is called Panchami and the prosperous colour of the day is grey.

The sixth day of Chaitra Navratri devotes to the warrior goddess Katyayani. She is also the sister of Lord Krishna and devotees pray to her with the name of Adi Parashakti. Goddess Katyayani is the most violent and fearsome form of Goddess Durga that roars in front of Demons in wars. This day is celebrated in the form of Shashthi. In addition, the prosperous colour of the sixth day is orange.

The seventh day of Chaitra Navratri is dedicated to the seventh and the most fierce form of Goddess Durga, Goddess Kalaratri. She is the form of protector that slaughters demons to protect the world from cruelty. On this day, people wear white colour clothes to attain the shelter of Goddess Kalaratri to seek her blessing and protection from the evilness of the world.

Moreover, Saptami is the day when people prepare for the eighth day of Navaratri. As a good number of people celebrate concluding Navaratri on the 8th day, they prepare for Hawan and Aarti for the same.

The eighth day of Chaitra Navratri is dedicated to worshipping Goddess Mahagauri that teaches to spread harmony and prosperity. According to the Hindu Mythology, the wishes of every devotee that prays to her gets fulfilled. Goddess Mahagauri is the emblem of intelligence and excellence. Also, pink is the prosperous colour of the day.

On the ninth day of Chaitra Navratri, people worship Goddess Siddhidatri who is also the ninth and supreme manifestation of Goddess Durga.

On this day, people in different corners perform Hawan and Puja to worship all the forms of Goddess Durga. Light Blue is the prosperous colour of the day. Further, the puja concludes with Kanya Pujan. On the tenth day, devotees who observed nine-day strict fast open their fast by eating Prasad from Durga Puja. Also, on the tenth day, people celebrate it in the form of Ram Navami.

Navratri Fast is a mandatory ritual that devotees follow with utmost dedication. However, as the festival falls during the hot summer days, it is necessary to eat proper food in order to stay healthy. Therefore, eating high-fibre food items like peanut, Makhana (Prickly Water Lily), fruits are the best options to take while fasting.

Also, here are the best suggestion for dishes to eat in 8 fasting days of Navratri-

Dishes for the 8 fasting days-

Navaratri celebration takes place in numerous regions of India. In some places, it is a religious event to observe fast and offer devotion to the Goddess. On the other hand, for some regions, it is an occasion to celebrate and perform their traditional rituals.

Uttar Pradesh- From the North corner of India, with great belief in Goddess Durga, devotees celebrate the nine-day festival with great joy. One may find almost every house lighting Diya and performing Aarti for nine consecutive days during Navaratri. Furthermore, the celebration of Navratri.

Ayodhya– Being the birthplace of Lord Ram, Ayodhya celebrates both Chaitra Navratri and Ram Navami on a grand scale. People decorate their homes, organize Hawan & puja and offer Prasad or offering to all the onlookers and passersby.

Karnataka- In the southern regions, people celebrate Goddess Durga in the form of both a fearless warrior and an auspicious Goddess. Thus, the celebration takes place in the form of a grand affair.

Maharashtra- In Maharashtra, people organize Mela and wear their traditional clothes to celebrate the festival of Navaratri.

Also, you may like to read about Ram Navami 2020- Things to Know

Connect here with the best Astrologers of India to learn more about Indian Festivals.

Remedies to Please 9 Planets To Get Rid of Problems
Views: 25390