Dussehra 2021- Why Lord Ram almost sacrificed his Eye on Dussehra? 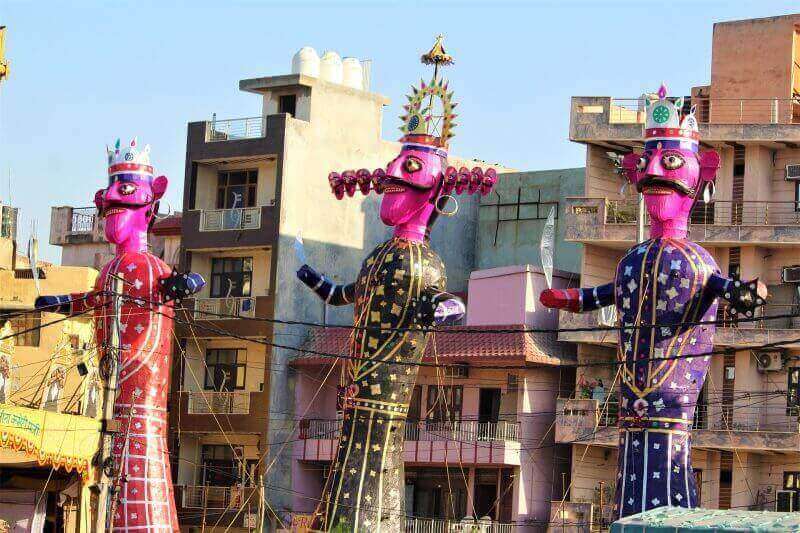 He is the symbol of fire in acts and fondness in the heart. May on this
Dussehra the odyssey of your life be as righteous and as gleaming as the impression of Lord Ram

Overture  to the Festival and Lord Ram

In Hindu Mythology, the majority of the festival offers people the meaning of triumph of good over evil. In standing with this, Dussehra is one such celebration of the victory of the goodness of evil being. This festival comes precisely 20 days before the celebration of Diwali.

Dussehra is also known to people as Vijayadashmi and Dashain. As a matter of fact, the celebration of Dussehra falls on the tenth day of Ashwin month in accordance with the Hindu calendar. Typically, the festival of Dussehra falls in the month of September or October of the Gregorian calendar.

Dussehra is one of the major Hindu festivals. The ending day of Navaratri or Durga Puja brings the celebration of Dussehra on the tenth day every year. People from different regions of the country have different reasons for the celebration for Dussehra.

In the points of facts, in the eastern and northern parts of India, the celebration comes with the end of Navaratri. In these states, this festival commences the preparation of other Hindu celebrations including one major-festival Diwali or Dipawali.

Dussehra or Dasahara, Dusshera, Dasara, or Dashain, this is the day of celebration of the end of demons by deities.  Also, the festival of Dussehra is popularly known as Vijayadashami. Furthermore, it is an amalgamation of two words which are Vijay meaning “Victory” and Dashmi meaning “tenth”.

The festival of Dussehra is celebrated on the tenth day after a 9-day long Navaratri/ Durga Puja celebration.

The day of Dussehra is the mark of the seventh incarnation of Lord Vishnu Lord Ram’s triumph over Ravana, the demon king of Lanka. Every year, Indians around the world celebrate Dussehra with gusto. Across the country, this day has a significance of an auspicious day. Every region and locality has its own significant method of celebrations.

There is one other significant factor Ayudha Puja which has an association with Dussehra.

The rituals of AyudhaPuja take place on the ninth day of Dussehra. In several regions of India, people celebrate Ayudha Puja with zeal and enthusiasm. There is no hype and people worship Gods on this day like every other day. However, the worship of books, computers, pens, kitchen tool, and cars, etc.

The worship of numerous working tools that are used for livelihood takes place on this day. People believe these tools to be as divine as the Gods.

The history behind the Celebration of Dussehra

In Hindu mythology, Dussehra has a special mention as a grand festival. It teaches us the lesson of humanity and godliness together at once. On this day, Lord Ram or Shri Ram kills Ravana, king of Lanka, and frees Goddess Sita, wife of Lord Ram.

In tales, Ravana and Lord Ram have a 9-day fearsome battle. Also, on the same day, Goddess Durga kills the demon Mahishasur.

This day is a commemoration of Lord Ram to triumph over Ravana and freeing Goddess Sita from captivity in Lanka. Ravana abducts Goddess Sita while she was in the forests with Ram and his younger brother Laksham for Vanvasa.

Before the commencement of the battle between Ravana’s army and Lord Ram’s Vanar Sena, Lord Ram worships Goddess Durga and offers her 108 lotuses & lamps. He seeks his blessings for strength to win the battle. Meanwhile, to test Lord Ram’s reverence, Goddess Durga removes one lotus out of 108. As Lord Ram reaches to the end of his prayers, he realizes that one lotus was missing.

Lord Ram is also known as the name Kamalnayan. He starts to cut off his own eye. Upon this, goddess Durga instantaneously grants him Victory over Ravana.  Devotees believe Lord Ram wins the battle because of the prayers offered to Goddess Durga. This day symbolizes the victory of good over evil, victory of Lord Ram and Goddess over King Ravana andMahishasur.

Dussehra celebration occurs in the major parts of the country. People from different regions have different ways of celebration.

There are grand processions and fairs organized for the occasion of Vijayadashmi. In various parts of the county, in public procession, the enactment of the Ram Lila takes place on the grand stages with a great number of audiences. In certain states, the burning of effigies of Ravana in front of a good number of people is organized with proper security.

The preparations of the occasion begin 10 days prior to the event with the commencement of the Navaratri. On the tenth day, people organize colorful exhibitions and fairs. Later, devotees worship Lord Ram and Goddess Sita and Goddess Durga. And burst crackers.

First, Dussehra is typically a ten-day-long festival because people prepare for ten days for this festival. Second, it also has recognition as Vijayadashmi. Furthermore, in most of the southern parts of the country, people celebrate this day as Dasara. In many other regions, it is called Dashera and Dussera.

The fall of this ten-day festival depends on the lunar date with many other important dates. There are many regions in India. There are complications to name it one festival as it has many names according to many regions. However, this day is a public holiday all over the country.

In particular, the festival is a representation of the legends of Ramayana, Lord Ram, and Ravana. This tale includes the battle between Lord Ram and demon king Ravana over the abduction of Goddess Sita. On the day of Dussehra Lord Ram wins a 9-day long battle again Lanka’s king Ravana.

On this day, people bring large statues of Ravana to burn and celebrate the win of Lord Ram in the form of “Ravana Dahan”.

People from Bisrakh don’t celebrate Dussehra in the form of burning effigies of Ravana because it is the birthplace of demon king Ravana.

Best Dishes to Cook on Dussehra

The celebration of Dussehra is the festival of sweets. Thus, each region of India celebrates the day with the native sweet dish. So, here is a list of sweets that you can try on this Dussehra-

Dussehra 2021 across the Country

Delhi – The capital of India brings a diverse representation of its existence on the day of Dussehra. People set a grand effigy of Ravana to set on fire after the enactment of Ram Lila. A grand fair occurs on the day and people set stalls for numerous dishes and other stuff.

Mysore – In Karnataka, the Dussehra celebration takes place for more than 400 years. Mysore has a universal acclamation for the grand experience on Vijayadashmi. Also, on the day of Dussehra, in this city people decorate the city for the propitious occasion.

Kullu – Everyone is familiar with this place as one of the best tourist attractions. In Kullu, Dussehra is a majestic festival that takes place for 7 to 8 days. Besides a perfect holiday destination, this place serves as one of the most popular destinations on Dussehra.

Also, people from other regions can consider Kullu to be a choice for vacation during the Dussehra holidays.

Varanasi – While this may be true, that the beautiful Ghats of Ganga, Varanasi celebrates Dussehra in the most unique manner. Also, this festival brings people to come together to the holy place and celebrate Vijayadashmi. However, cities like Allahabad and Baraha also celebrate Dussehra with great enthusiasm.

Gujarat – In point of facts from the past many years, this state has a significant way of observing the 9-day long Durga Puja. People celebrate for nine days by dancing and singing. On the tenth day, a grand function is held for the celebration of Vijayadashmi.

As a matter of fact, people across the country decorate their homes and temples with colorful flowers and lamps. With the arrangements of lights and colors, fairs are organized. On grand stages, the enactment of Ram Lila takes place.

The time of the festival is perfect for visiting family and friends. However, you may consider going to different regions this year to observe different attractions on the day of Dussehra 2021.

This year Dussehra falls on Friday, 15th October. Also, here are the dates for Dussehra Next Five Years-

We hope you enjoyed reading about the festival of Dussehra. Also, you may also like to read about zodiac signs.