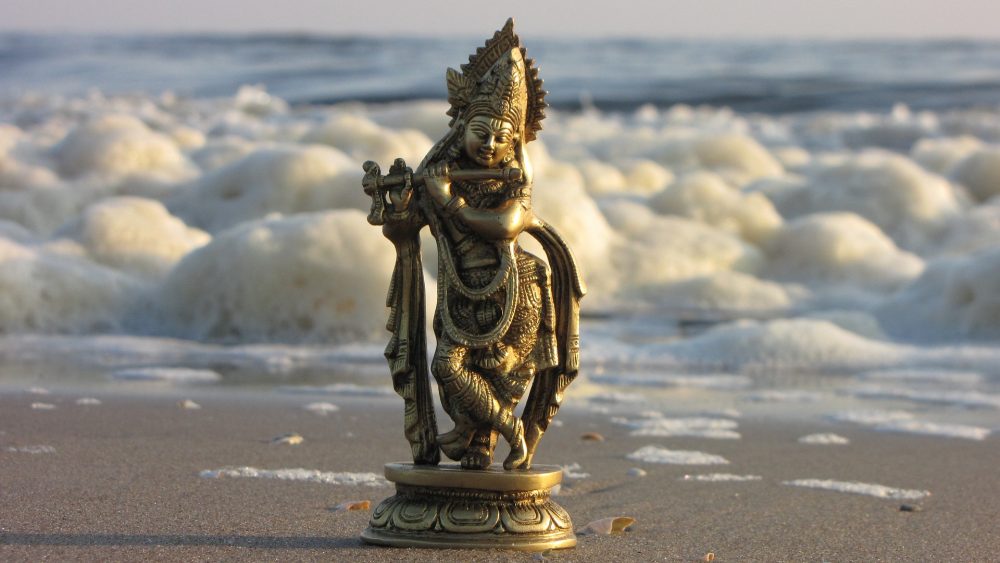 He is a great leader and a source of infinite knowledge. May Lord Krishna fill every person’s life with sparkling energy, cognition, and righteous direction

Govardhan Puja is an annual Hindu festival. This festival has significant value because it has an association with food and nourishment. Also, it is known to people as Annakut Puja.

On this day, people cook 56 varieties of food and present as an offering to Lord Krishna. Devotees perform this ritual to show their thankfulness towards God.

In the ancient tales, this is the day when Lord Krishna lifts Govardhan Parvat (mountain) to provide shelter to all the people and animals that live in Vrindavan. Furthermore, this incident is a representation of how LordKrishna fulfills his duty towards his devotees.

Moreover, on the festival of Govardhan Puja, a large gala is organized and people cook numerous varieties of food to offer their Gods. This day commemorates Lord Krishna’s love for His devotees.

In point of facts, people prepare worship idols of Lord Govardhan on this day and offer him food and seek his blessings. Also, this day is a remembrance to show gratefulness of devotees towards Gods.

Furthermore, this festival has a huge followingacross in the country and the globe. People from several different region and religion pray on this day.

This festival occurs in the month of Kartik on the first lunar day of Shukla Paksha according to the Hindu calendar. In accordance with the Gregorian calendar, it falls in the month of October or November each year. It is celebrated on the next day of the celebration of Deepawali.

Govardhan Puja falls while the Holy week of Deepawali celebration. It is celebrated on the fourth day of a week-long festivity of Diwali every year.

The word Govardhan is an amalgamation of two words, first is Go which means, Cow and Vardhan which means Nourishment. The festival of Govardhan Puja is dedicated to worship of Lord Krishna. On this day, people worship Govardhan hill along with Lord Krishna.

People show gratitude towards Lord Krishna by worshiping him on Govardhan Puja. In the Hindu religion, it has always been important to worship Mother Nature.

The celebration of Govardhan Puja is dedicated to the preserving of a natural resource. It also gives us a message on how nature protects us.

The major reason behind worshipping Govardhan Parvaton Govardhan Puja is to commemorate how nature shields one and all at the time of a hazard.

History After the Celebration of Govardhan Puja

As a matter of fact, the arrogant behavior of Lord Indra is known to one and all. Similarly, the history of the celebration of Govardhan puja has the association of Lord Indra and Lord Krishna.

In accordance with the ancient mythological tales, in olden times people offer lavish meals to Lord Indra in Braj. Upon this, LordIndra promises good and enough rain to nourish their crops.

Since Lord Krishna doesn’t believe in Gods asking something in return of wellbeing of people. However, alongside this, he considers it a harsh price for poor farmers to pay. Further, Lord Krishna tells the farmers to not present opulent offerings to Lord Indra. Upon this, all the villagers agree to LordKrishna and stop offering to Lord Indra.

This angers Lord Indra and makes him feel disrespect. In the lead, he brings heavy rain and floods the village. Consequently, the villagers start praying to Lord Krishna for saving their lives. However, Lord Krishna comes to rescue he lifts the Govardhan Parvat (mountain) on his little finger.

All the villagers then come to refuge under the Govardhan Parvat. This makes Lord Krishna saving villagers from the rage of Lord Indra. However, the rain continues for seven consecutive days.

In the end, Lord Krishna’s generosity and love towards humanity tower up Indra’s arrogance. In addition, this makes Lord Indra stop the heavy rain. Moreover, this whole incident is known to people as Govardhan Lila.

Customs and Celebration of Govardhan Puja

On the fourth day, people worship Lord Krishna and show gratitude towards him for being their supreme entity and life source.

As a matter of fact, there are numerous kinds of rituals that people perform on Govardhan Puja according to the difference in culture and customs of every region. Also, the rituals begin with praying to the worship idols of Lord Krishna.

In accordance with the traditional rituals, devotees make worship idols for Govardhan Puja with cow dung. However, there are no fewer efforts done to decorate the houses and temples.

People in India have a unique belief in Lord Krishna. They don’t let their precious God find anything little or less in their decorations.

This festival falls on the fourth consecutive day of the Deepawali festival so there is a great number of diyas (lighting lamps) and candles decorated in each house. Alongside praying to Lord Krishna, devotees pray to Lord Govardhan as well.

There are gorgeous and colorful rangoli designs on the doorsteps of houses. In temples, people bathe sculptures and worship idols of Lord Krishna with milk and later dress them in bright new clothes.

In every Hindu family, the rituals of Govardhan Puja hold a great value because it is an essential gesture of Hindus to thank LordKrishna and Lord Govardhan.

On this day, people also cook 56 verities of foodstuff. It is called Chhappan Bhog.

The Chhappan Bhog on Govardhan Puja

In particular, here is what Chhappan Bhog consist of –

Namely, here is what Chhappan Bhog includes (dishes may vary in accordance with the region) –

As we have mentioned above, this festival has a significant value for foodstuff. People cook and offer 56 delicious varieties of Indian dishes on the occasion of Govardhan Puja.

Here is the list of delicious sweets, snacks, and meals to cook on Govardhan Puja.

Festival Celebrated across the Globe

The festival of Govardhan Puja falls on the fourth day of Deepawali celebration week. On this day, people are indulged in the fervor of festivity. Devotees from all the regions cook a variety of food and offer it to Gods. Later, the food is served on the table.

Along with this, devotees bath their pet animals, specifically cows and bulls early in the morning and decorate them with flowers and garlands.

This festival has singular importance for Gujarati people across the globe because they celebrate it as the beginning of the New Year.

Furthermore, the next day to Deepawali is Varshapratipada which is known to people in the form of Govardhan Puja. It is the fourth day of Deepawali celebration which is celebrated with great zeal.

The celebration takes place in the major parts of the country and at places like Maharashtra, it is also called Bali Pratipada or Bali Padva.

Govardhan Puja 2022 and Next Five Years

These were amazing details about the festival of Govardhan Puja. Also, you may like to read about the Eco-Friendly Festival of India.

Remedies to Please 9 Planets To Get Rid of Problems
Views: 29917