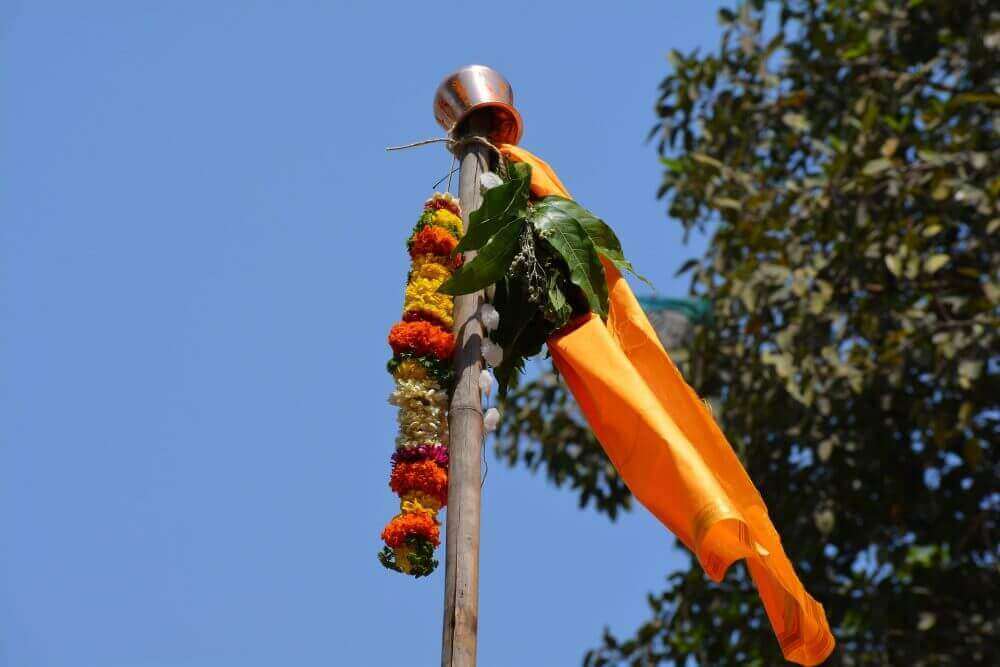 On this Gudi Padwa, may Lord Vishnu showers prosperity and bring the joy of spring in your life

Spring is the initiation of preparation for numerous celebrations and the festival of Gudi Padwa marks the beginning of traditional New Year.

It is celebrated in the India states of Maharashtra, Goa, Kerala, Karnataka, Daman and Diu, Dadra and Nagar Haveli on a grand scale. Padwa refers to the Sanskrit word Pratipada which is the first day of a lunar fortnight.

On this day, people from several western regions decorate their homes, make colorful rangoli in their courtyards & doorsteps, and hoist a flag on their front gate.

Also, they decorate their doors with fresh mango leaves, neem leaves, and flowers. Alongside this, streets observe festivity in the form of huge processions and folk dance.

According to history, word draws its origin from the South Indian language. The festival of Gudi Padwa signifies people erect flag on their homes.

Padwa derives its root from the Sanskrit language word Pratipad which means the first day of every fortnight, the Amavasya or new moon day. People hoist a flag on this occasion which gives an indication of celebration.

The term Padwa has links with Balipatipada which is the third day from Deepawali celebration.

The festival Gudi Padwa brings the bliss of spring and harvesting of crops. It is a festival that holds a prominent position in Hindu Mythology.

It has links with Hindu mythology that Hindu community cannot overlook. According to the tales, on this very day, Lord Brahma creates time and universe.

This day signifies the commemoration of the legends of Ramayana and when Lord Rama comes to his home, Ayodhya after triumphing over demon King Ravana in a fearsome battle. Also, it is a sign of commencement of Shalivahan calendar.

Alongside this, in the rural portion of Maharashtra, in accordance with Anne Feldhaus, Gudi Padwa is associated with the dance form of Lord Shiva. On this day, people in Maharashtra come together carrying the Gudi Kevads to the temples of Lord Shiva.

Custom and Festivity of Gudi Padwa

In order to celebrate the festival people wake up early in the morning and sweep cleans their courtyards. Later the worship place is plastered with fresh cow-dung.

This is also known as spring cleaning. Later, women and men make beautiful rangoli designs on the doorways with different-different colors. The vibrant colors of rangoli make the houses look alluring. It is also known as the process of welcoming the spring season.

Afterward, family prepare gather in fresh clothes and prepare special traditional food offerings for the celebration of Gudi Padwa. The foodstuff includes gud chikki, jaggery, and pacchadi. The neem leaves are an integral part of the offering because the sweets add taste in the food and neem adds medical benefits that people cannot overlook.

Along with this, there are numerous delectable food offerings like Pooran Poli, Shrikhand, and much that women serve on the tale on Gudi Padwa.

Mythological Reasons behind the Celebration of Gudi Padwa

The day of Gudi Padwa is dedicated to the devotion and worship of Lord Vishnu and his several incarnations.

People pray Lord Vishnu on this occasion and offer him prayers and traditional offerings. According to the tales, Lord Vishnu asks Gods to bless people with prosperity and health.

According to Hindu mythology and sacred Hindu writings, the instance of dusk right before the sunrise is immensely prosperous. This time offers endless goodness and positive energy. Therefore, the one who prays to the Lord Sun at the time of sunrise receives both vigor and affluence. Also, the people who pray to the lord for prosperity, love, and liveliness.

The festival of Gudi Padwa is celebrated to commemorate the victory of good over evil in the form of Lord Vishnu’s seventh incarnation, Lord Rama triumphing over demon King Ravana.

People believe this very day to be the one when Shree Ram returns to his kingdom with Goddess Sita after slaying Ravana. Therefore, Gudi Padwa is the traditional mark of Lord Rama’s victory and homecoming after 14 years of exile.

Celebration of Gudi Padwa across Different Region of the Country

This festival embraces the belief of a grand number of people. Thus, it gathers a tremendous amount of devotees praying on the occasion. Also, the event offers a notable sight when several Gudi arrangements are visible in front of the household on the streets.

People tie a bright (kesariya) color silk cloth on the top of long bamboo. In the point of fact, on top of the bamboo,-++-+- it has either one or more boughs of neem with a garland of flowers.

The village and cities and loaded with enthusiasms and festivity on this day. People carry huge processions and host the community Gudi Kavad. Therefore, they together carry Gudi Kavad to Lord Shiva’s temple.

The festivity majorly takes place in the western part of the country. However, on this day, in many areas, the performance of the ancient dance form of Lord Shiva has a special position because this festival draws a link with Neelkanth.

The term Gudi refers to the flag. Hence, hoisting a flag on the gate is a mandatory ritual of this occasion. However, Along with this, people in a great number from Maharashtra, Goa, Karnataka, Kerala, and many more places carry Gudi Kavads and visit the temple of Lord Shiva.

In ancient Hindu tales, the legend Bramha marks this as the creation date of time & cosmos. Therefore, people commemorate this event on the regards of the creation of the universe.

The major dish of the festival of Gudi Padwa is Pooran Poli. However, you may also like to try-

Furthermore, Many devotees, on this day, erect a special Gudi flag of silk cloth along with a garland. Also, it is displayed from the windows and roofs.

This festival has a significance of a very prosperous occasion. Also, It is the beginning of the traditional New Year so it marks a strong belief of goodness for the Hindu community and especially Marathi and Konkani Hindus.

Gudi Padwa 2021 and Next Five Years

These were some major facts and information about the eccentric Hindu festival of Gudi Padwa. Also, you may like to know about Effects of Ketu in Each House.