India gets Rafale- Here’s everything you should know 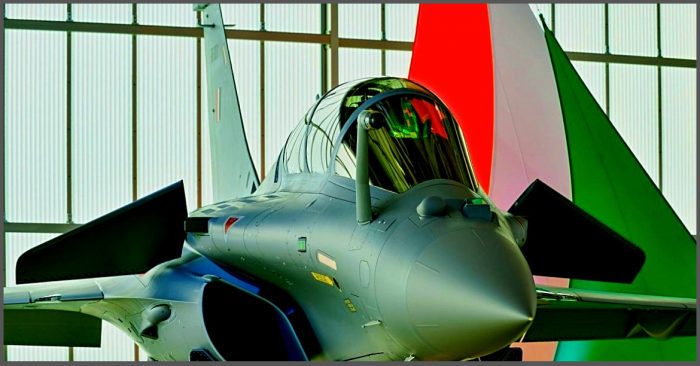 Finally, the Dassault Rafale will make its way in the flyaway condition from France to India.

India receives its 1st of 36 Rafale fighter jets from France. On the founding day of the Indian Air Force, Rafale is handed over to Rajnath Singh, the defense minister.

The jet is officially introduced on the Air Force day, October 8, 2019. However, the planes would only reach the nation by May 2020. Also, the first Rafale holds the tail number “RB 01” after the name of Airt Chief Marshal R.K.S. Bhadauria as he plays the most vital role in the negotiations for acquiring the entire 36 Rafale fighter jets.

In order to bring the flying beast home, an inter-government agreement was signed by India in the year 2016 with France for procurement of the jets Every jet could carry a variety of powerful missiles and guns and the deal was signed at a price of Rs. 58,000. In addition, the first jet unit will be stationed at Ambala Air Force Station and the second at Hasimara in West Bengal.

To begin with the introduction, Dassault Rafale is a French term that means “gust of winds”. The aircraft is a design of Dassault Aviation. The plane got its first-ever highlight in the mid-1970s.

Further, in the early 80s, the Dassault began the manufacturing of the jet which later followed the testing in the 90s. Meanwhile years 91-95 the process had to stumble upon the situation of political uncertainty. Later on, the production of Rafale restarts in the year 1997 with an initial order of a set of 48 planes for the Ministry of Defence. However, one shall know that the jet entered air service with the Navy of France in the year 2004.

The first operational Rafale jet, EC 1/7 “Provence” positioned at the airbase of Saint-Dizier in 2006 by the French Air Force. Following the competitive impression, countries like Egypt and Qatar are the current operator of the jet. Nevertheless, India will make its position on the list this year.

The Rafale is a versatile plane with a capacity to carry an array of combat aviation missions for air defense. In addition, Rafale, a twin-jet fighter jet is capable of operating both a shore base and a commendable aircraft. Also, it holds praiseworthy aptitude for close air support, anti-ship strikes, recon missions, and in-depth strikes. However, the jets may arrive in India with few modifications.

Indian and the Rafale Deal

The idea of inducting the jet Indian Air Force occurred in 2001. However, it came in process in 2007. The current force has a set of heavy and lightweight combat jets. Therefore, the Defence Ministry is ready to add an intermediate fighter aircraft.

At that time, there were numerous international aviation manufacturers who had the interest of the Indian Government. Thus, the Ralafe aircraft was not the first choice for the Indian Government and its gargantuan plan to restore the IAF by inducing MMRCAs. However, the head of the Defence Acquisition Council, AK Anthony approved the proposal to bring the Rafale in the air force in August 2007.

Meanwhile the process of selection of the aircraft, all the jets went under test and careful analysis by IAF. Further, with the brilliant capacity and perfect match with expectations, Dassault Rafale was shortlisted. Further, Rafale won the contract and Dassault commenced negotiations in 2012.

The Rafale is an up to date and modern fighter aircraft which is immensely famous for its gusty speed and capacity to carry out the weapons & missiles. Also, the Dassault Rafale has significant popularity for its dexterity and attack power.

Alongside the twin-engines, the aircraft has a delta wing design and both single & dual seating cabin. Out of 36 jets, India has placed an order of 28 single and 8 dual seaters Rafale.

Moving further, it is 15.27 meters long and has a wingspan of 10.80 meters and the jet is capable of g-forces (in a case of emergency) as high as 11g. Besides, the empty weight of Rafale varies from 9900 kg to 10600kg which depends on the variation and utmost take-off weight of 24500 kg. In addition to its capabilities, its engines push to achieve a high speed of 1912 kmph.

The jet will come to the nation with several modifications to suit the specifications of India. For instance, the modifications involve tracking systems, radar warning receivers, a 10-hour flight data recording, low band jammers, and infrared search.

The French Navy has been into many combats since the year 2006 to 2011 and the Rafale jet has been an active and impressive part of many wars for over a decade. Thus, it is a combat-proven jet. It is a demonstration of proficiency. Further, the French Air Force operated Rafale in its combat operation in Libya. Afterward, it was engaged in the peacekeeping mission in the Central African Republic.

Right after the news made its way to people, the rain of Tweets took over the internet to congratulate both the nation and the defense minister. So, here are some of them-

These were the major details about the Fying Beast Rafale. Also, you may like to read about Talk to astrologer- a millennial therapy?

Remedies to Please 9 Planets To Get Rid of Problems
Views: 25494