Lohri 2022 – The Flame of Eternal Goodness 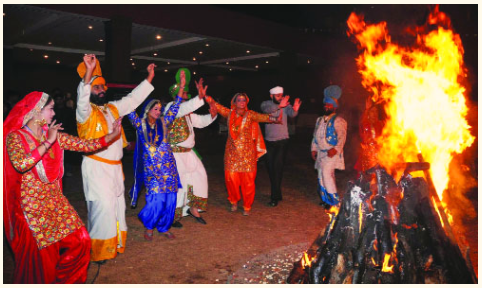 Makke ki Roti-Sarson ka saag, gud chikki & gajjak are the emblems of the end of cold nights. may the eternal flame on Lohri offer warmth and sweetness in the life of one and all

Lohri is an annual festival of India. With a significant belief among people, it leads to a grand celebration across the country. Traditionally, it is a Punjabi folk festival. Thus, it observes a significant grandeur in the state of Punjab.

Also, people from the northern part of India from Sikh and Hindu community celebrate the festival of Lohri every year. With the belief of some significant legends and these communities pay tribute in the form of a huge bonfire. Moreover, many people celebrate this festival for the passing of winter solstice.

Traditionally, the festival of Lohri is the mark of the end of the winter. People welcome the sun and longer days to their life with the festival of Lohri. The occasion falls a night prior to the celebration of Makar Sankranti. Thus, it also is known to people as Maghi.

In accordance with the solar part of the calendarLunisolar Bikrami, the festival falls on almost the same date every year.

Normally, the celebration of Lohri falls in the month of January according to the Gregorian calendar.

As per the mythological tales, the word Lohri draws its roots from the term Loh which means Tava. Also, it originates from Loi, the wife of reformer Kabir Das.

In accordance with the customs of olden times, this is the day to welcome the sun after its journey to the other part of the hemisphere of the earth.

It is a twinning festival with the Makar Sankranti. Therefore, it commonly falls a day before Makar Sankranti. In the state of Punjab, it is known to people in the form of Maghi Sangrand. Furthermore to the celebration of the passing of the winter solstice, this festival is celebrated to welcome the financial new year of farmers. In accordance with the Bikrami calendar, this is the beginning of New Agricultural tenancies.

On this day, people collect rent, commence networks, and sow in their fields. Thus, it is celebrated as a financial NewYear.

This festival holds great significance in the life of people. It is the mark of the harvest festival when farmers commence their new year and sow in their fields.

This day is the symbol of the end of winters. Thus, people worship Lord Sun on this day. It is the day when people show gratitude towards the sun. The sun is considered as a life source, so people thank Lord Sun on Lohri for returning in their life and allowing a good harvest.

All the communities across the country celebrate this festival in numerous unique forms. Alongside the farmer, this is an auspicious day for all the new brides and newborn babies.

History behind the Celebration of Lohri

Indian festivals have numerous folklores behind the celebration. The festival of Lohri also has many mythological tales. According to one, in ancient times, people celebrate at the end of the month when the winter solstice occurs.

For this reason, the length of this festival observes an increase every year. In accordance with the beliefs, the region where the festival views celebration is close to the Himalayas and in these areas, winter leaves a major impact. Thus, people set a bonfire on the day of Lohri as a mark to celebrate the outset of longer and warmer days.

The day of Lohri marks the commencement of summer. Also, it has relevance with the harvesting season of Rabi crops.

The time of the festival of Lohri is one of the most celebrated times of the year. This festival brings the rays of joy to people, firstly because it takes place at the beginning of the year and secondly because it brings the warmth of the sun along with the auspicious instances.

Lohri is the most popular festival in Punjab and Haryana. However, today its celebration takes place on a large scale across the country. People set the bonfire of Lohri, worship God and pray for a good harvest. This festival is similar to Thanksgiving where people show gratitude to Lord Sun for good abundance and rich harvest.

On this day, all the children visit door to door and sing folk and devotional songs. In return, people show loving gesture and present them with fruits and sweets. The special collection of foodstuff includes chikki, gajjak, til laddoo, and other Punjabi sweets.

Later in the evening, people light the bonfire and distribute the special food items of Lohri among one and all. The special food has a consideration of Lohri Prasad (offerings). These offerings include gajjak, sweets, chikki, laddoo, peanut, and jaggery.

Also, people gather together and sing Punjabi folksongs for Lohri. They show gratitude to the bonfire for its warmth in the cold winter. The night ends with the traditional banquet of Sarson ka saag, makke ki roti, and delectable kheer.

This day is also popular for observing kiteflying on a grand scale in Punjab and Haryana.

The celebration of Lohri is incomplete without women and men making delicious foodstuff together. Gud Chikki, Gajjak, and Kheer are three major sweets for the day.

Here are the best food suggestions for the celebration of Lohri-

Celebration of Lohri across the Country

On the occasion of Lohri people observe a public holiday in various regions of India. However, the state of Punjab observes a restricted holiday because the festival draws its origin from the same place. Here, communities like Sikh, Hindu, Muslim, and Christian celebrate the festival together in front of the grand bonfire.

Alongside the grand celebration in India, this festival takes place in countries like Pakistan and Afghanistan.

Lohri holds immense importance and multiple reasons for celebration. Primarily, the festival observes celebration because it’s the end of the short & cold winter days. Secondly, on this day the farmers begin to sow (seeds) in their fields. On the occasion of Lohri people come together and pray for the greater good and rich harvest.

Lohri 2022 Date and Next Four Years

This year, the festival of Lohri falls on Wednesday, Thursday, 13 January.

You may also like to know about Ahoi Ashtami 2019- Tale of Dedication and Love of Mothers.

Remedies to Please 9 Planets To Get Rid of Problems
Views: 49358