Origin of Disease depends on planets? 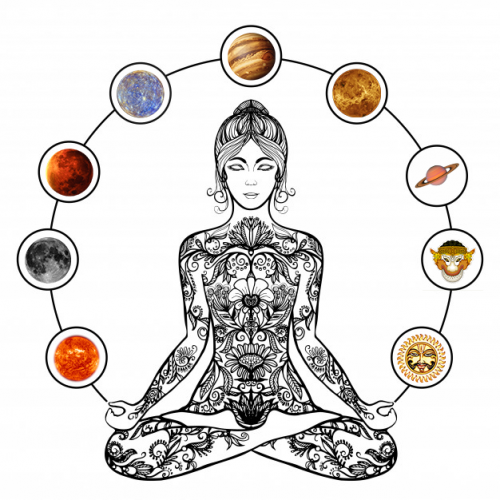 Before I had any idea about the celestial planets and their impact on our lives, I had no regulation on cursing my eating habits. Well, as strange as it may sound but the celestial bodies guard us, govern us and rule over us in majestic & marvelous forms. When in a strong position, they offer the grandeur of their designation. Nevertheless, when the planets are malefic, they become a cause of various diseases beyond human affairs. Disease and planets are connected to each other.

Each planet is the ruler & significator of a definite set of emotions & capacities, for instance, Sun drives the capacity to take forth a task, on the other hand, Mars drives the courage to walk through the challenges. However, the pearl of cosmos, the Moon is the ruler of all our emotions.

Similarly, according to Astrology, the origin of the disease depends on the planets and constellations. In the digital age, where the assistance of modern tools has been used to know the causes of diseases in the human body, in the Vedic period, the Vaidya, Hakim, used to use astrology to get full information on the causes of diseases and get care.

However, we belong to a country that has a heritage of Vedic Astrology. Thus, According to astrology, because the horoscope is a reflection of that celestial body, the source of the Disease depends on the stars, constellations, and signs of the zodiac.

Also, answers to question like would the therapy lead to success to cure the illness? can be achieved by Vedic Astrology.

According to astrology, the origin of the disease depends on the planets, constellations, and zodiac signs. As I have mentioned above that horoscope is a depiction of the celestial bodies that affect the body of a person at birth, a person can find out about various diseases by their Horoscope reading. In this, every person has a definite outline of their entire life. Also, the body of a person falls sick because of the daily changing effects of the planetary constellations. Every planet, constellation, the feeling is a part of the human body. The disease also has an association with the same organ that represents the planet, constellation, zodiac, or house.

Further, the twelve houses in the horoscope of the, representing the organs and diseases of the human body, are as follows:

The human body is a slight depiction of the cosmos as a whole. Each planet has a direct relation with a specific body part and governs specific body organs. Read on to learn-

Sun, the center of the solar system governs the flow of energy in the human body. In addition, it represents the fatherly figure in our lives. The sun has an equal relationship in the role of the soul, digestion, health, and healing in general.

A weak sun can cause physical deterioration, rendering a native to vulnerable to diseases such as fatigue, joint pain, polio, heart problems, poor vision, anemia, and various skin problems.

Sun is a godly celestial body that directly Bones. Therefore, a person with malefic Sun in Horoscope can face issues like weak bones and bone pain. Furthermore, a weak Jupiter in Horoscope and a weak Moon in Horoscope also cause bone problems.

Our emotional zig zag is a very error of the Moon as this bright planet has a connection straight to our soul and emotions. The moon’s white color symbolizes the native’s purity, serenity, and genuineness. Furthermore, the impacted moon can cause insomnia, diabetes-related problems, appendix, lungs, and so on. Also, a person under a powerful impact of the Moon is often popular for being emotionally very sensitive.

A native with a malefic Moon in Horoscope often struggle with problems like constant nightmares, lack of sleep, and hazardous emotional disorders.

The red, heated, violent, and aggressive planet Mars is the governor of strength, empowerment, and aggression. Mars in Horoscope is the epitome of boldness, bravery, and peripatetic form. The red color of the planet resonate native’s soul with fierceness and make them full of soldierly courage. On the other hand, a weak Mars in Horoscope makes the native coward and escapist. Also, such people often struggle with stage fear and low self-confidence.

Mercury or Buddh is the ruler of intellect, grasping abilities, memory, sensibleness, determination, rationality, and down-to-earth etiquette. Speaking of the same powers, Mercury is one of the most robust and impactful planets of a native’s horoscope. If Mercury is weak, the native will face problems in memorizing important things.

One of the most impactful disorders i.e. Obsessive-Compulsive Disorder occurs in a person due to a weak Mercury. Well, this also sounds cool in the modern age as superstars like Farhan Akhtar and Alia Bhatt suffer from OCD.

Oh, Jupiter why you so important and poignant? Well, before I explain this point, I’d tell you I have a weak Jupiter. Thus, I take its impact in the form of uncertain weight gains and lack of ability to concentrate. The biggest planet of the cosmos, Jupiter causes the biggest hurdles when comes to a weak position.

Jupiter or Guru is the symbol of fortune, physical health, spirituality, designation, and strength. A malefic Jupiter often presents the native with a dangerous disease like uncommon weight gains, liver problems, diabetes, obesity, and tumor.

If we talk separately about physical health, physical vitality, weak immunity system, weak digestion are common in such cases. Looking at it the other way, mental issues like depression, pessimism, terrible self-pity, and anxiety are noticeable factors draws by weak Jupiter.

A person with a weak Venus in Kundli and Shukra Dasha in Kundli may face issues like lack of sexual abilities, lack of sexual desires, dis-satisfactory appearance, lack of physical appeal, and polite behavior. Furthermore, such a person draws a tendency for relationship failure and marriage failure. In addition to this, women with weak Shukra often suffer from irregular menstruation cycles and miscarriage.

The best Astrologers of India says, “a person with a weak Venus should never land into any extra-marital affairs, it only draws bad luck and bad health to them.”

Saturn, a celestial body that one and fear the most. Why? It governs the Karma of an individual and further, offers the fruit of reality.

Saturn or Shani, the brother of Lord of Death, Yama is considered the planet of diseases. In addition, Saturn is melancholic in nature which contracts and obstructs, delays, binds, limits harden, colds and clean.

Saturn regulates the body’s supply of calcium and vitamins. Thus, a weak Saturn results in severe Muscle problems. This induces a debilitating influence on the circulatory system resulting in restriction of the flow of body fluids such as blood, lymph, nervous energy, urine. Similar to the effect of weak Sun, a native with a weak Saturn has bone problems. Also, they have a high possibility of nervous disorder, paralysis, arthritis, and rheumatic pains, etc.

Being just a shadow in cosmos, Rahu represents all the virtual out forms. It is the significator of all the bright desires and is the epitome of laziness as it moves too slow.

Rahu is in charge of the arms, respiration, chest, lungs, Muscle system, etc. As a result, it causes a risk of cardiac arrest, lung failure, muscle disorder, and so on.

Also, Rahu instructs a native to walk on the path of spirituality. Thus, a person with a weak Rahu often has extreme phobias, incurable Disease, and allergies, anxiety issues, and concentration problems. In addition, malefic Rahu derives similar effects like weak Mars and Saturn. Such natives suffer from, muscle-related Disease, bone pain, and old-age related diseases.

Like Rahu, in Vedic Astrology, Ketu is also a shadow planet. It has a very profound meaning because it implies loneliness, isolation, etc. A person with a weak Ketu may have to tackle irritating diseases like chickenpox and stammering.

The headless planet Ketu strikes its malefic effect on the stomach, lungs, and lever of a human body. Speaking of the same, Ketu always causes enigmatic diseases that can not be established by their origin. An affected or malefic Ketu results in issues related to lungs, intestines. Specifically, people with weak Ketu have a regular complaint of Gas and windiness.

These were some highlights on how planets affect our health and how Disease and planets are correlated.

Also, you may like to read World AIDS DAY 2019- Don’t Hesitate To Accept

Consult the best Astrologer of India and get your Horoscope

Rajinikanth’s Birth Chart Analysis: Yogs In Kundli That Makes Him A Superstar

What To Not Do On Thursday? An Astrological Insight