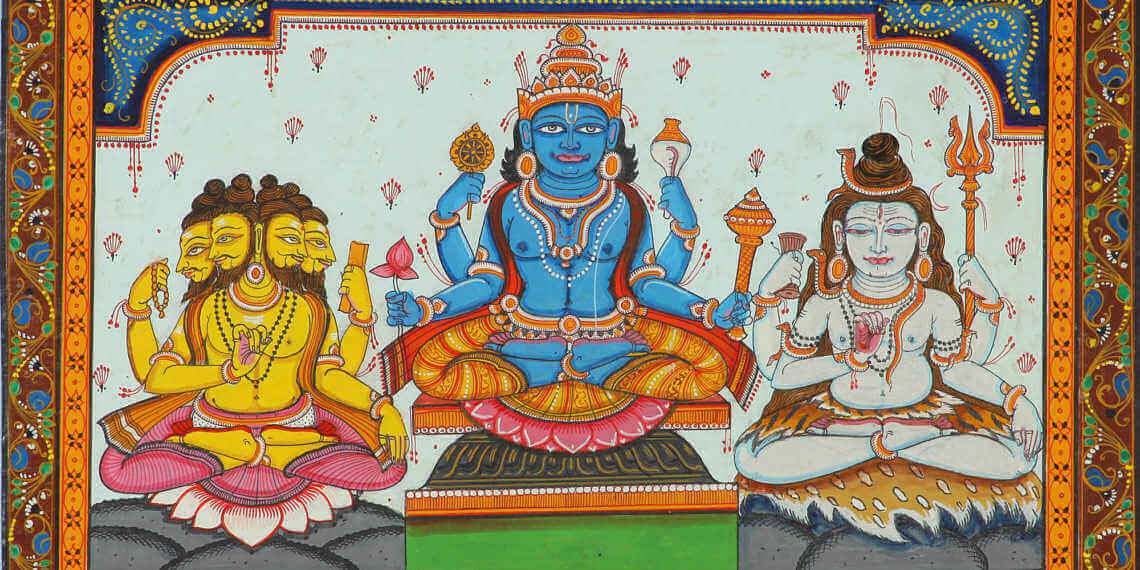 When we refer to the Holy Trinity, it is naturally assumed that we refer to Christianity and it’s basic. However, Hinduism is based on the three God’s which rule over every aspect of life in this universe.

Hinduism considers  God as the omnipresent and the omnipotent who creates, protects and destroys the universe and its lives. We worship the bountiful Creation of God Brahma. The Protecting Power of Vishnu and the Destructive force of Shiva.

These three basic figures combine to form the supreme cosmic spirit also called Brahman or universe. Which is genderless and limitless.

The Gods of the Hinduism faith represent different expressions of Brahman.

In fact, many Hindu communities may have their own divinities whom they worship. But these are simply different ways of approaching the Ultimate being.

Hinduism is based on thousands of Gods and Goddesses. However, Hindus recognize three principal gods:

Brahma, who created the universe

Vishnu, who preserved and preserves the universe

Shiva, who will destroy the universe.

Brahma is the Creator of the Sristi or the universe.

The devotees worship other expressions of Brahman (not Brahma), which takes a variety of forms. This is because Bramha was cursed by Lord Shiva for lying.
Brahma is the creator of the universe and father of Manu, the first human to survive, from whom all mankind (मानवता – Manavta) has descended as per Hindu philosophy.

Vishnu is the one who preserves and protects the universe and has come on the earth through his avatars (incarnations) time and again, to save humankind from natural disasters or from tyranny.

The most well-known avatars are Rama, Krishna, who destroyed the wicked and established a new order, Buddha, the founder of Buddhism, and Kalki, the horse.

Goddess Laxmi is the wife of Vishnu. Fortunately, she has appeared to support him in every incarnation.

Lakshmi is the supporter of Vishnu who has appeared as the wife of each of Vishnu’s incarnations, including Sita, the princess of Jagat Pura wife of Prince Rama, and Rukmini, wife of Krishna.

The God Shiva is a major part of the Hindu Trinity, along with Vishnu and Brahma.

He is considered to be everything by those who worship him: creator, preserver, and destroyer. In Shiva, the opposites meet. His devotees are present all around the world. In fact, the greatest personalities in the world worship him.

Shiva, the destroyer is an important part of the trinity because, without destruction, there can be no recreation. His Holy city is Varanasi, or Banaras and believed that any Hindu who dies there is believed to go straight to heaven.

Shiva is the source of both good and evil who combines parallels and many contradictory elements. Not only he supports the Devtas, but also gives a boon to the Asuras

Shiva possesses many consorts. Including Kali, who often portrayed as wild and violent. Parvati, known for her gentleness, and Durga, a powerful Shakti goddess created from the combined forces of the anger of several gods.

You have completed reading the Holy Trinity of Hinduism. Also read: exploring the day of cannabis God