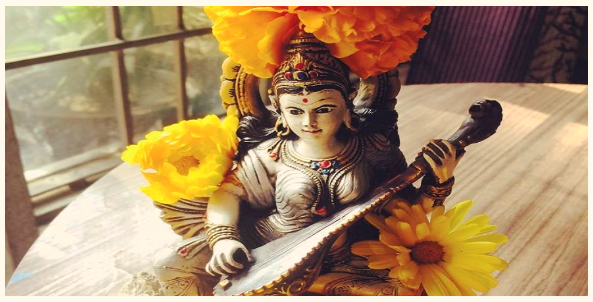 She is the emblem of wisdom, piety, & nature. May on this Vasant Panchami Goddess Saraswati shower the eternity of intellect on one and all.

Vasant Panchami is an annual Hindu festival which has a singular significance for people because it has an association with the Goddess of wisdom, Saraswati Maa. The festival is also known as Saraswati Puja and Basant Panchami to people.

It is a festival that marks the arrival of the Vasant or spring season. The festival observes celebration by people in numerous forms in accordance with the differentiation of the rituals of all the regions.

The festival of Vasant Panchami falls in the month of February in accordance with the Gregorian festival.

People from Hindu, Sikh, and Jain community arrange an imposing celebration on the occasion of Vasant Panchami. However, it is one of those festivals which observe great scale festivity in India as well as numerous foreign countries. Vasanti Panchami marks a grand celebration in the country of Pakistan, Bangladesh, Nepal, Java, and Bali.

This festival brings a storm of joy to people because it signifies the beginning of preparations for Holika Dahan and the grand Hindu festival of Holi.

Alongside this, the Vasant Utsav occurs forty days prior to spring.
Moreover, Vasant Panchami has an association with the spring season, harvest, and Goddess Saraswati altogether.

Yellow color has a significant attachment to the celebration of the Vasant Utsav. As the color signifies intensity & wisdom, it is an integral part of the festivity.

Also, the yellow color is the symbol of natural magnificence. It defines the purity of nature so people have faith in putting on yellow clothes on Vasant Panchami.

Besides, yellow flowers, decoration, and worship cloth is also a significant part of the festival. With the faith of obtaining prosperity, goodness, and wellbeing, people bring into play the yellow color on this day.

Saraswati Maa or Goddess Saraswati is the emblem of brilliance in skills and learning. Her four hands be a symbol of intellect, alertness, and knowledge.

The lotus in her hand signifies the sacredness of her nature and as she plays Veena, with her two hands, it signifies her embracing the wisdom of music and art. In addition, she has a shimmering white swan to ride with her neat dress which is the symbol of purity.

She sits on a lotus which signifies her wisdom. Also, she has a peacock which is a reminder that a strong ego can be held back by wisdom.

Saraswati is the goddess of wisdom, intellect, art, music, learning, and knowledge. She holds a prominent position in the Hindu religion and trinity of Hindu mythology.

As a part of the Trinity, Saraswati, Lakshmi, and Parvati, Goddess Saraswati support Lord Shiva, Lord Vishnu, and Lord Brahma in creation, maintenance, and reprocess of the universe.

The Hindu sacred writing of Rigveda mentions of Goddess Saraswati. As she has significance as the goddess of wisdom, her devotion draws meanings in contemporary times also. A great number of Hindus celebrate the festival of Vasant Panchami to show gratitude towards Goddess Saraswati for bestowing knowledge and learning.
Along with this, on the day of Vasant Panchami Saraswati Maa is revered in the western parts of the country. With a belief of achieving eternal learning skills, people commence teaching their children on this day.

Custom and Festivity of Vasant Panchami 2021

Vasant Panchami celebration takes place in many different forms across the country. In the North and south portions of the country, it signifies the kite flying.

In the Indian state of Bihar and Punjab, it is known to people in the form of harvest festival as well as kite festival. However, in Uttar Pradesh and several other Northern regions, it is known as Saraswati Puja. Nonetheless, the yellow clothes and yellow color is a permanent part of the entire festivity. It can be called the ruling color of the day.

Celebration of Vasant Panchami across Different Region of the Country

This is an important day especially for children who are starting to learn. People in India, believe that a child must use a pencil/pen on the day of Vasant Panchami to attain supreme learning skills.

In the western portion of the country, on this day children write the first character of the syllabary. However, in the southern portion, people make their children write on sand or rice. This is an auspicious day for people to tie the knot of marriage and Griha Pravesh. People with this belief tie knots or fix the date for marriage.

The day of Vasant Panchami starts with people getting ready for the Saraswati Puja. Devotees get up early in the morning, take bath and offer water to Lord Sun because worshipping the Sun adds prosperity to life.
Later, people gather for Saraswati Puja in the yellow outfit. In the worship area, a Puja Kalash is set to devote Saraswati Maa.

Moreover, devotees decorate the deity in bright yellow clothes. On this very day, before and after the puja, a person can hear the melodious sound of devotional songs.

Later, devotees sing devotional songs and chant sacred Mantras and complete the holy ceremony dedicated to the worship of Goddess Saraswati. They pray for wisdom and knowledge to the goddess.

Afterward, a priest or devotee distributes Prasad to everyone. The conclusion of the devotional ceremony marks the beginning of the Kite Flying Ceremony. All the kids, men and women gather together and fly kites to enjoy the festival.

The festival of Vasant Panchami brings the bliss of spring and joy of kite flying in Nepal, Java, and Bali as well.

In Indian tradition, people believe in offering the best of their abilities to others in the plat of food. Also, on the festival of Vasant Panchami, people prepare the best of Indian tastes. Here are some suggestions that you may try on this Vasant Panchami-

The festival of Vasant Panchami is an occasion that brings equal joy to both young and adult. On this day, one and all pray together and worship Goddess Saraswati to bestow the light of knowledge in the life of each person.

The festival casually observes a public holiday in most of the Indian states. However, a few colleges, universities, and hospitals operate on the day. Public transport notices a viewable journey of devotees to temples and institutions to worship Saraswati Maa.

The festival of Vasant Panchami 2021 falls on Wednesday, 16th February.

These were some major facts and information about the eccentric Hindu festival of Vasant Panchami and you may also like to know about Tulsi Vivah.

Remedies to Please 9 Planets To Get Rid of Problems
Views: 25492