9 Facts you did not know about Ravan 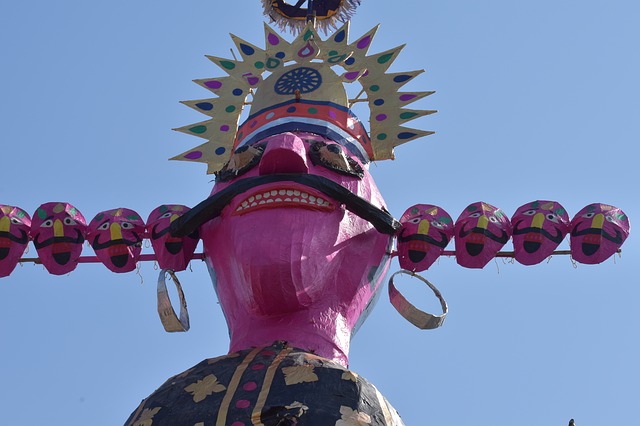 1. Ravan And Kumbhkaran Were The Incarnation Of Lord Vishnu’s Gatekeepers

Ravan and Kumbhkaran, both were Jaya and Vijaya, Lord Vishnu’s gatekeepers.  Once when the Kumaras (Lord Bramha’s mind-born sons)came forth to meet Lord Vishnu, they were stopped. This made them angry and they cursed Jaya and Vijaya that they would have to separate from their lord.

Pleading for forgiveness, they were presented with an option- either spend 7 lives on earth as Lord Vishnu’s allies or 3 lives on the same as the lord’s enemies. They chose the latter. In one of these 3 lifetimes, they were born as Ravan and Kumbhkaran.

Ravan had forced himself on Nalakubera(son of Kubera)’s wife. As a result, he was given a curse that if he ever touches a woman without her consent, his head would shatter into pieces.

After this incident, he did not touch women against their consent. This is the reason why he never laid a finger on Lady Sita.

Nevertheless, she had to undergo an Agnipariksha.

Ravan’s ten heads were the symbols of his expertise in the 6 Shastras and 4 Vedas. He was even capable of controlling the planetary shifts and had the highest degree knowledge in astronomy.

Ravan indeed was an evil king of Lanka but unlike the belief that Ravana was a demon, he was half Brahmin and half-demon. Ravan’s father was the famous and learned rishi, Visravas while his mother was Kaikasi, a demon.

5. Shamed By His Own Wife, He Eventually Met His Downfall

Lord Rama’s army defeated that of Ravan and eventually only Ravan was left alive. At that time, Ravana decided to perform a yajna. to turn the tables which required him to not move. Getting knowledge of this, lord Rama sent Angad, Bali’s son, and his monkey army to bring interruptions in the Yagna.

Having failed to that once, they then dragged Ravana’s wife, Mandodari. To their dismay, Ravan still did not move. Mandodari then shamed him saying that Lord Rama waged a war to get his wife back while Ravan did not even move to save his. Finally, he moved, disrupting his Yagna.

6. He Got His Name Later In Life, And From Lord Shiva

Ravan wished to change Lord Shiva’s home to Lanka from Kailash. In order to do this, he tried to lift the Kailasha mountain. Lord Shiva, being the supreme lord, put down his feet on the mountain, thereby crushing Ravan’s hand beneath the mountain with the help of just one toe. Ravan was in tremendous pain and let out a roar.

At the same time, he was in awe of such power of the lord and out of respect and as an attempt to lessen the anger of Lord Shiva, recited Shiv Tandav Stotram which is revered even today). It is also believed that in order to provide music, he used his own veins.  Lord Shiva, impressed by such dedication, gave him the name Ravan (one who roars loudly).

7. He Could Control Sunrise

Because of years of penance and dedication, Ravan was believed to have become that he could even control sunset and sunrise. At the time of the birth of his favorite son, Meghnad, he told all planets to stay in the 11th house of the kid so that he could be immortal.

Instead, Saturn or Shani refused to follow his instructions and stood in the 12th house. This angered Ravan so much that he attacked Saturn with his mace and even imprisoned him.

8. Ravan Performed Yagya As A Brahmin For Rama

In order to start making the Ram Setu to cross the seas to reach Lanka, a puja had to be done. As there was no Brahmin closer to them who was as learned as Ravan, He did this puja for Lord Rama and his army of monkeys. Also, he brought Lady Sita along with him for the puja as it could not be complete without both the wife and husband’s presence and blessed them. Ravan even suggested a good time to Lord Rama for starting the battle and blessed him with victory.

Ravan’s father was the wise rishi, Visrava who was the son of Prajapati Pulastya (one of Lord Brahma’s ‘mind-born’ sons). In spite of being half Brahmin and half Daitya, he was praised by Lord Rama as a Mahabrahmin and even performed Ashwamedha Yagna to kill him.

Further, you may like reading about 6 Planets In Retrograde Motion

Multiply Your Money With These Astro Tips
Views: 1705