A Wild Conjunction- Jupiter and Venus 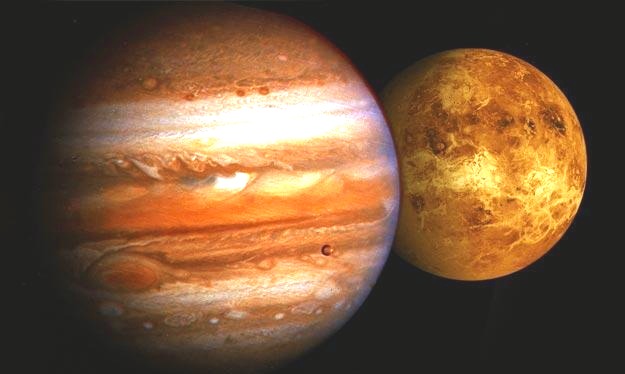 We are living in a Universe where we are surrounded by different types of energies and deviations. The big part of our Universe is the Solar system which is dealing with different types of Planetary Conjunction. Jupiter and Venus, the two planets also contribute a lot in making changes and variations in our day to day life.

Basically Conjunction occurs when two astronomical objects come in the same rising direction or in the same longitude. It can involve one or two objects in the solar system and a more distinct object such as a star. However, in modern times, we generally relate to conjunction with Astrology.

24 November 2019, the day when Jupiter and Venus are going to come in the same line and longitude. The conjunction of Venus and Jupiter is going to be quiet stunning because these two bodies are considered to be the most brilliant starlike points of the Universe.

It is not compulsory that all the conjunctions between Jupiter and Venus should be equal, it may differ at some points. It will be quiet difficult to observe the conjunction because of the noise and pollution around the ozone layer. However, the pair will be widely separating each other to fit within the field of view of a telescope.

Venus is brighter in our sky because it is closer to Earth, so it will appear larger in the sky than Jupiter.  Clouds cover this nearby planet and they reflect most of the sunlight that hits them.  Farther Jupiter reflects some of the light that reaches its clouds.  The result is that Venus is about 3 times brighter than Jupiter, the two brightest “stars” in the southwest.

Venus and Jupiter hold a close relationship in terms of Astrology. We can also call Jupiter as Husband and Venus as Wife in a man chart. Jupiter is also “Guru”, and this position is achieved by a lot of responsibility and the criterion of highness. Guru” is the teacher of gods and “Venus” is the guru of demons. Religion, truth, worship, pride, spiritualism, spiritual knowledge, etc. come under the work of Guru. Whereas entertainment, love, opulence, pleasure, convenience, and enjoyment all come under the working element of Venus. Results of the combination of Guru and Venus.

Both planets are very different from each other. However, if the combination of both is made in someone’s horoscope, then it becomes very ambitious. Such people are high flying, their desires are very big, it doesn’t matter in which family they are born.

When Venus and Jupiter come in conjunction it makes a person religious, well-skilled and intelligent too. Both the planets possess negative and positive energies in we talk in terms of Astrology. Jupiter looks for positive energies like marriage, wealth, career, a wider picture of life. On the other hand, Venus is completely opposite to it looks for negative energies and that is the reason most marriages lack these days. However, Venus shoes more expansion of love, beauty, and spiritual level.

Effect of Conjunction On Mankind

We are living in a technological world, where are getting bound in technologies from all sides. Deep inside every person is dealing with depression, confusion, unhappiness, and unsatisfaction. However, we are finding different ways to get out of all these things. Astrology is a thing that somewhere connects us to the spiritual world, it tells us about planetary changes and their effect on our lives.

Some people strongly believe in planets while some are completely against it. However, it is a fact everybody needs to understand that somewhere our lives are relating to planetary changes. It is a good thing that our situations change according to our planets which can have both negative and positive impacts on our lives.

As mentioned above both Jupiter and Venus bring changes in our life either be relationships, marriage, career, health or any other issue. The thing is how we are going to deal with the changes. If our relationship or love life is not working properly, we need to find the reasons and try to correct them. No doubt planets alter our life but we too need to shape our lives in such a way that we can gain positive energy from every planet.

These were the major points about Jupiter-Venus Conjunction. Also, you may like to read about:- World AIDS DAY 2019- Don’t Hesitate To Accept

Consult the best Astrologer of India for your Future Predictions