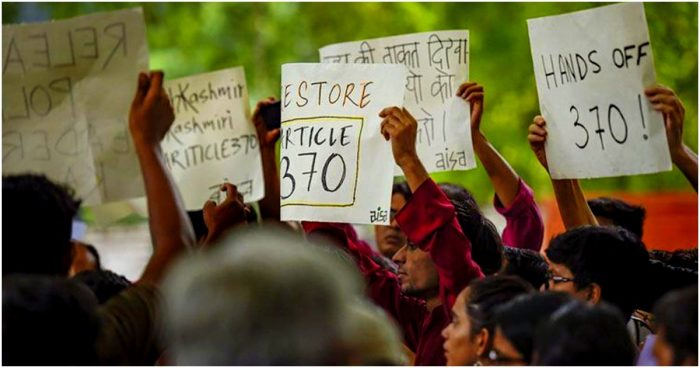 Kashmir, a place which used to be called “Paradise on Earth” has turned into a Hell from the past few decades. There are millions of reasons that are responsible for its current situation that varies from person to person. The topic of Kashmir always remains in the limelight due to one reason or another. Thousands of questions are asked but unfortunately, there is not even a single answer.

Article 370 basically acknowledged a special status for the state of Jammu and Kashmir irrespective of the other states of India in terms of autonomy and formulation of laws. It also includes article 35(a) which defines that the residents of Jammu and Kashmir live under certain special laws including citizenship, property ownership and some fundamental rights which were not applicable to other states of India.

Removal of Article 370 and Its Aftermath

On 5th August 2019, Kashmir again became a Headline when the news came that Article 370 has been abrogated along with all its provisions from the state of Jammu and Kashmir. All the people especially Kashmiri’s were left completely stunned by this surprising decision. The barrier in Calling services, ban on the Internet, and the curfew in Kashmir completely cut it off from the rest of the world.

A tag of special status was removed from Kashmir and the famous saying “Every action has the equal and opposite reaction to it” was proved right once again. Shutdowns, curfew, stone pelting, Bloodshed rocked the Valley.

This is one side of the coin if we say, no doubt a special status was removed from the valley. Now, if we talk about the other side it is beneficial for the Kashmiri people too. Kashmir will now get an opportunity to enjoy the same rights as other states of India. New startups will boost the economy as well as the employment of the state. Some big projects are already on the way to Kashmir. In a nutshell, we can hope for a better tomorrow of Kashmir.

If we talk about the present situation of the Valley it is not so good to hear. It’s been almost 100 days since Kashmir is still under curfew. Schools, colleges, offices are still under seize, the Internet is still not working. However, one thing which everybody has to accept that there is some improvement in the situation of Kashmir as compared to the past 2 months. Shops and Traffic can be now seen running mostly in the morning and evening hours. We can say in the coming few days or months normalcy will return to the valley.

Slowly, people are realizing whatever has happened is for their benefit. Also, the government is trying very hard to bring back a normal life in the Valley.

Though the Internet is still not working the calling services have again started which is the best example to say that Kashmir is again returning to its basics.

Make It Paradise Once Again

Every person of India to some extent feels bad for the people of Kashmir irrespective of what religion or community they belong to.

Kashmir has seen many ups and downs from the past many years. Children and Youth of Kashmir are the main victims of it. However, now its the time to change Kashmir, convert it to Paradise once again. Here, focus on the tourism of Kashmir may play a major role as the beauty of Kashmir is popular among across the globe.

It’s not only the duty of government but every citizen of India should contribute a helping hand for the upliftment of Kashmir. Whatever has happened in the past can not be changed. But now we have to make sure that Kashmir does not face such type of drawback again. We all have to stand together for Kashmir and raise it up and convert it into Paradise again.

Recently, the government has declared Jammu and Kashmir as Union Territory and Ladakh as separate Union Territories. Another positive step in this direction as Ladakh can also enjoy their separate rights now.

A new Map of India looks quite interesting with Jammu and Kashmir and Ladakh as separate entities at the top.

Kashmir! Through an Eye of Astrologer

The planetary combinations, energies surrounding Kashmir indicate that internal political and socio-economic struggles shall remain along with civil resistance.

Saturn being the pivot around which the problems revolve and cause them to stretch unnecessarily for long periods of time. Rahu’s impact is the main reason for terrorism in Kashmir. Affiliation of the third house causes other countries to interfere in the personal matters of India

Abrogation of Article 370 results in absolute integration of J&K as the Indian Territory which is a welcome step. The future holds some more resistance however, Saturn’s impact will still cause the development to meet with resistance. Jupiter’s recent transit in Sagittarius shall push forward however, a new political order is going to establish soon.

The issue of Kashmir shall no longer remain as the center point around which Indo Pak problem exists. Pakistan will slowly become more dependent upon India for its socio-economic development.

The removal of Article 370 has an international impact even though this is an internal matter of India. However, India needs to work on the development of its defense which it seems like is already happening.

These were the major details about the removal of Article 370 in Kashmir. Also, you may like to read about Why millennials replaced religion with astrology.

Consult the Best Astrologer in India for 100% accurate astrology predictions.