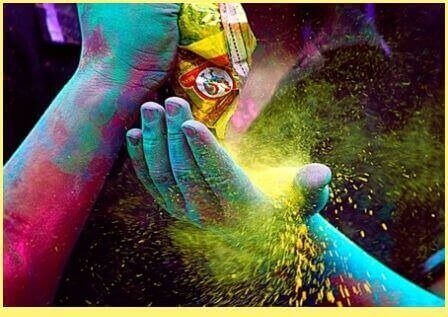 The most awaited festival, festival of colors HOLI is here, so we thought of sharing some exciting facts, history, and significance of this colorful festival with you all, also we are going to share that what Holi 2019 will bring for the people fall in 12 sign of the zodiac.

Holi, known as the ‘festival of colors’ is celebrated on the full moon day falling in the month of Phalguna (Feb-Mar). Therefore, various colors and water are thrown on each other, amidst loud music, drums etc to celebrate Holi.

Similar to many other festivals in India, Holi also signifies a victory of good over evil. As per ancient mythology, there is a legend of King Hiranyakashipu with who Holi is associated.

The word “Holi” originates from”Holika“, the evil sister of demon king Hiranyakashipu, he was a king in ancient India. As per the Hindu Mythology, he wanted to take revenge for the death of his younger brother who was killed by Lord Vishnu. So to gain power, the king prayed for years.

He was finally granted a boon, that made him virtually indestructible. But with this Hiranyakashipu started considering himself God and asked his people to worship him like God. However, the cruel king has a young son named Prahalad, who was a great devotee of Lord Vishnu. Prahalad had never obeyed his father’s order and kept on worshiping Lord Vishnu.

The King was hard-hearted and decided to kill his own son because he refused to worship him. He asked his sister ‘Holika’, who was immune to fire, to sit on a pyre of fire with Prahalad in her lap. As a result, they plan to burn Prahalad. Holika was wearing a cloak (shawl) that made her immune to injury from fire, while Prahlada was not.

As the fire roared, the cloak flew from Holika and encased Prahlada as he was reciting the name of Lord Vishnu throughout. As a result, Holika burned. However, Prahlada survived. Vishnu appeared and killed Hiranyakashipu. The defeat of Holika signifies the victory of good over evil.

After this, Lord Vishnu killed Hiranyakashipu. But it is actually the death of Holika that is associated with Holi. Because of this, in some states of India like Bihar, a pyre in the form of a bonfire is lit on the day before Holi to remember the death of evil.

It is also said that Holi is the celebration of the death of Ogress Pootana who tried to kill infant, Krishna by feeding poisonous milk to it. Another legend of Holi which is extremely popular in Southern India is that of Lord Shiva and Kamadeva.

According to the legend, people in the south celebrate the sacrifice of Lord of Passion Kaamadeva who risked his life to revoke Lord Shiva from meditation and save the world. Also, popular is the legend of Ogress Dhundhi who used to trouble children in the kingdom of Raghu and was ultimately chased away by the pranks of the children on the day of Holi.

This dates back to the period of Lord Krishna. It is believed that Lord Krishna used to celebrate Holi with colors and hence popularized the same. He used to play Holi with his friends at Vrindavan and Gokul.

That is why till date Holi celebrations at Vrindavan are unmatched. Holi is a spring festival to say goodbye to winters. In some parts, the celebrations are also associated with spring harvest.

Farmers after seeing their stores being refilled with new crops celebrate Holi as a part of their happiness. Because of this, Holi is also known as ‘Vasant Mahotsava’ and ‘Kama Mahotsava’.

Holi colors used to be made from flowers of ‘tesu’ or ‘palash’ tree and known as gulal. The colors used to be very good for skin as no chemicals were used to make these. But amidst of all definitions of festivals, the definition of colors for sure have changed with time.

Today people have started using harsh colors made from chemicals. Even fast colors are used to play Holi, which is bad and that is why many people avoid celebrating this festival. We should enjoy this age-old festival with the true spirit of festivity.

Lucky colors for your zodiac this Holi!

Aren’t you excited to know that while playing Holi which color will make your life colorful too? We have bought some amazing list of colors based on your zodiac by the survey of our certified astrologers that which zodiac should use which color. Let’s check it out:

Moon will travel your fifth place of festivity and ceremony. You have a craving for going out and having some good times. You’ll experience no difficulty discovering some good company for you. Enthusiastic and over-energetic by nature, the Aries loves to celebrate festivals. Lucky colors for them are Red (Gulal), Copper, Yellow, and Green.

Its great time to celebrate with your family as Moon is fourth, invest and appreciate the energy with your family. Your vitality will on the more elevated amount. Relationships work best when give and take is done in equal measure, this colorful festival is played with much-gusto by the Taureans. To keep things uncomplicated and peaceful, Taurus should play with Pink, Green, Blue, and White.

Geminis love Holi as they get to meet a lot of new people and even old friends. Plus they get to show off their general knowledge and amaze people. To stay prosperous and in good health, Gemini should play with Purple, Pink, and Green.

Holi is the best festival for a Cancerian as they get to spend time with friends and family – all the people they love and care about! To shoo away the negative energies and invite harmony, they should play with Yellow, Orange, and Green. It influences you to feel solid and in concordance with them. A gathering of dear companions will be extremely wonderful and mentally animating.

This sign stands for fire, which means bright and bold, and is something that matches their personality. So Leos should go for bright colors, which will uplift their spirits. Your colors can be burn to the range, all shades of gold or blood red.

Moon travel in Leo and Saturn is in the fifth house. Loved ones have their own particular wishes and objectives and are will undoubtedly indicate thought to you.

Virgo has this earthy element attached to it. This means Virgos have a natural way to get everything under the skin. Color like green is the best color for them to use this Holi. Moon in twelfth, Saturn in fourth and Ketu in fifth shows you lose your cool rapidly and might hurt other individuals.

Libra is a believer of peace and positivity and”Air” is their element. They are calm in almost every situation possible. This Holi, colors like lavender, violet, and baby blue are the best colors to choose. Jupiter in ascendant and moon in eleventh suggests that you are irresistible, enabling your family to appreciate your conversation and open way.

You feel sufficiently solid to do pretty much anything. Utilize this positive vitality and get together with companions and appreciate the day.

Mars rules Scorpions, and their strength lies in the element “Water”. Colors for them are blood red, black, maroon, and burgundy. Staying close to these colors will avoid confrontations, imbalance, and disharmony in their lives. You feel brimming with vitality as Mars travel over you. Utilize this positive vitality and get together with companions.

Sagittarians are cheerful, trustworthy and spirited. If they want good luck and the best of everything, they should go for Indigo and dark blue. These are the perfect colors for them. To abstain from aggravating the strained circumstance, cease from acting seemingly out of the blue. You need to be patient on this colorful eve.

“Earth” is the key element for Capricorns. Ruled by Saturn, Capricorns are contemplatives and have reservations for love. The best color to go with for Capricorns is Charcoal Grey. You may feel confined to the world. Your companions will anticipate getting together to have a decent celebration and will demonstrate their appreciation to you.

This Holi brings a fresh start. Utilize this opportunity to determine old clashes, as a middle person or by venturing out clear issues up. Holi colors will get positive shades in your life. The best colors for this sign would be the new generation of colors from the family of Blue.

“Water” being the element makes Pisceans calm, sensitive and gentle. Mild shades of the sea can be the best colors for them to choose this Holi. These colors will bring a lot of positivity and happiness in their life. Your companions may think of astounding recommendations today; believe your instinct and choose whether you need too blige them. Plays precisely don’t over-energized.

These were some major details about the festival of colors and bliss. Also, you may like to read about Horoscope – View of the Hour.