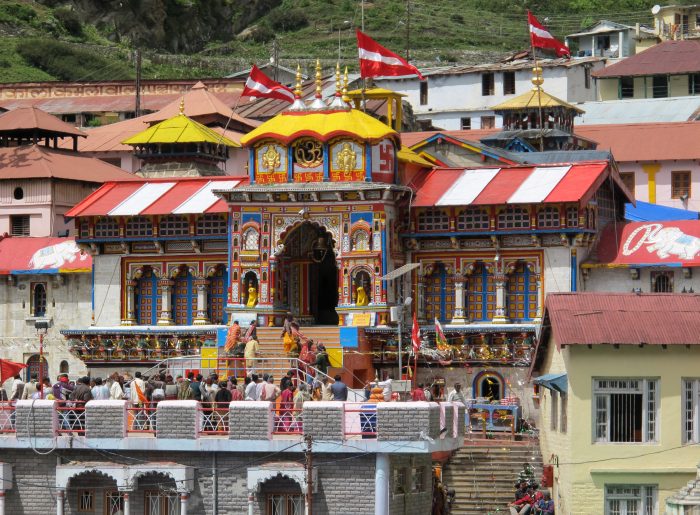 Whenever the burden of immorality falls on the earth, Lord Vishnu is born to overcome the suffering of his devotees. Just as Rameshwar in Treta Yuga, Dwarka in Dwapara Yuga and Jagannath Puri, the abode of Kali Yuga has been considered. Similarly, Badrinath is considered as the abode of Satyuga.

In Badrinath Dham, Lord Vishnu is still doing penance in the form of Badri-Narayan. It is said that all the wishes of whoever comes here are fulfilled.

The Badrinath Temple is located on the banks of the Alkhananda River, in the district called Chamoli, of Uttarakhand State. This temple is dedicated to Lord Vishnu, has been established by Adi Guru Shankaracharya as one of the 4-Dhams. Temple is divided into 3 parts.

Garbha Griha, Darshan Mandal and Sabha Mandal. There are 15 sculptures in the temple complex. The most prominent of which is a 1 meter high black stone statue of Lord Vishnu. Here Lord Vishnu is embellished in meditation posture.

To its right are the figures of Kubera, Lakshmi, and Narayana. It is also called “Vaikuntha of the Earth“. According to the system of Shankaracharya, the priest of the temple is from the state of Kerala in South India. The temple remains open for visiting from April-May to November-December.

5 forms of Badri-Narayan are worshiped. These five forms of Vishnu are known as Pancha-Badri. It is said that when Ganga Ji descended on the earth, the earth could not bear its strong velocity. The Ganga was divided into 12 waterways. One of them became the origin of the river Alkhananda. This place became the resting place of Lord Vishnu and was called Badrinath.

Earlier this place was known as Shiv Bhoomi. Lord Vishnu, born as a child, started crying here. After hearing the cry, Shiva-Parvati came there and asked the boy what do you want? So the child asked for that place. In this way, Lord Vishnu got this place from Shiva.

Once when Vishnu was absorbed in meditation, there was a lot of snowfall. Vishnu was completely immersed in snow. Upon this, Lakshmi’s heart got shaken after seeing Vishnu’s condition. Lakshmi herself stood there, took the form of a tree and started to bear snow on her. When Vishnu completes his tenacity, he finds that Lakshmi Ji in a cover of snow.

Vishnu Ji said to Lakshmi Ji, “Goddess, you have meditated as much as me, hence from today, your worship will be done with me at this place. Because you have protected me in the form of Badri tree, so I will be referred to as “Badrinath”.

Best Places to visit in Badrinath :

The doors of the Dham are open for 6 months only and the announcement takes place on occasion of Basant Panchami. In addition, the doors always remain open on the day of Akshaya Tritiya and further closed after Diwali. After worship on the last day, by law, priest light the Akhand Deep. Furthermore, during this period, devotees worship Baba Badrinath at Pandukeshwar.

How to Reach Badrinath Dham?

Railway: Rishikesh is the nearest railway station to Badrinath. You can reach here directly through trains from Delhi, Mumbai, Kolkata.

Airways: Jolly Grant of Dehradun is the nearest airport to Badrinath.

Roadways: After reaching Rishikesh, you can reach to Badrinath using private vehicles.

You may also like to Read: Interesting Facts About Kedarnath Temple