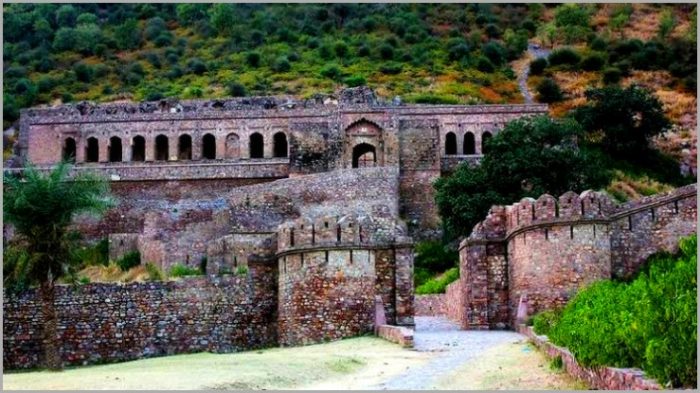 Do you believe in ghosts? Are they real? Have you felt any such paranormal incidents that make you believe in the supernatural? These are the questions that may arise in your mind sometimes, but you have no certain answers. There are numerous incidents reported worldwide about the most haunted places in the world. Surprisingly, the top 10 haunted places of the world record the name of a small destructed town situated in the middle of the vast deserts of Rajasthan. The tiny village of Bhangarh holds a haunting history which keeps the travelers intrigued about its ghosts, making it a haunted tourist spot.

The Bhangarh Fort is a 17th-century fort built by the Kachwaha ruler of Amber Bhagwant Das. It was built for his younger son Madho Singh. The fort is located at the foothills of Aravali range in the Alwar district of Rajasthan, near the village Gola ka baas.

The ancient fort lays in ruins after some unknown reasons caused its destruction and the death of its town folks. This fort carries the traces of the Rajputana dynasty.

As the locals claim that the Bhangarh fort is a place of paranormal activities. Also, they heard creepy sounds and noticed weird frightening movements.

the story behind the fort is associated with a Tantrik who was involved in black magic named ‘Sindhu Sevda’. The beautiful princess Ratnavati was the daughter of Chatr Singh. She was also known as the jewel of Rajasthan.

The Tantrik with the help of his black magic conspired to attain princess Ratnavati only because of her mesmerizing beauty. It so happened that the princess along with her friends planned to go to the market to buy perfumes.

Taking the opportunity, the Tantrik cast a spell of love on a perfume bottle which he gifted to the princess. Ratnavati under the influence of black magic took the bottle but was informed about the black magic by a villager. Angry on the Tantrik, Ratnavati threw the bottle out of the window. Miraculously, the black magic of the bottle prompted a big rock to fall on the evil Tantrik which caused his death.

During his last breaths, he cursed the entire village that every living being would die and the village along with the fort would be destroyed. Mystically overnight, the whole village burned down along with the royals. No one survived the huge massacre. From that day onwards, the village was tried to rebuilt but the cursed haunted the village drastically.

I have remained multiple times in Bhangarh around evening time. The admonition which you see at the entryway of the stronghold has been kept by the Govt. Of India and can be found in each different strongholds of India.

The first run through when I went there at 1 AM night, two guardians were there, I surmise those were private gatekeepers, which were not from Govt. of India. First, they had rejected us to enter inside the stronghold. Be that as it may, in the wake of accepting hush money they have concurred. They have given us 2/3 bamboo sticks for security from creatures. As there were two lakes inside the fortification, creatures used to come there to drink water.

Me & my friends at Bhangarh Fort

We were absolute 6 companions. You may see the shadow of an individual over broken stones. In the wake of going into the fortress, it was hard to have a practical outlook. We have been chatting with our companions with noisy voices, so anyone couldn’t state he heard some commotion from that side. In the wake of entering inside, we have begun eating chips/cold beverages in the recreation center inside.

We have taken light lights as well, anyway chose not to utilize those. On the off chance that by chance you center the light to someone’s face he himself gets a tad of terrified and successively making other individuals as well.

We have been sitting in the recreation center. We have looked wherever to locate any suspicious exercises inside the fortress. Be that as it may, we were not able to discover any. At that point, we thought to go progressively inside the stronghold.

Be that as it may, one of our companion denied as there were shakes inside and there were odds of rush in the event of terror factor. At the hour of returning, we have partitioned ourselves into three gatherings with two individuals in each gathering. The last gathering individuals felt a tad of frightened. Other than that nothing was there.

At the point when we went there for the subsequent time, there were at that point some Jaipur folks praising the birthday of one of their companions. In short, there was nothing extraordinary about that area. It was simply in a remote territory, interfacing street was not in a decent condition, there was no power so you can have a great time during the excursion.

Whoever thinks to go there now around evening time is unthinkable. Police officers don’t permit to go inside nowadays.

According to Vedic content, Rahu runs all unreasonable power, when Rahu is intensely tormented in Dusthana houses then this sort of paranormal forces can be seen. Yet, coherently these are perspective the individuals for the most part experience. Moon speaks to Mind and Mercury speaks to the sensory system.

At the point when Moon and Mercury are severally harassed by Rahu and different malefic then locals will experience the ill effects of wickedness spirits.

A scholarly soothsayer can anticipate and investigate the nature and wellspring of clairvoyant assaults or villains assets and can propose proper cures. Fallen angels, spirits, ogres, evil presences and apparitions are some undetectable elements that may will in general impact individuals.

On the off chance that ascendant is in mobile sign and Saturn in the seventh house and malefic planets cast sick angle on Moon at that point subject may experience apparitions of devils.

These were some major details about The truth behind the haunted Bhangarh Fort. Also, you may like to Read: Astrology health Benefits of wearing Kada

Vedic Remedies in Astrology- A Benediction to Cease the Problems
Views: 4868

How Past Life Karma Affects Our Zodiac Signs
Views: 9144