Did Jupiter Get Slammed By An Asteroid? 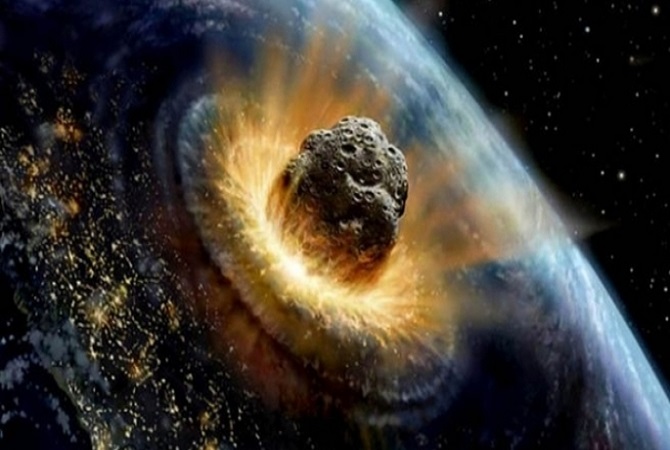 Jupiter, the largest planet in the entire solar system, lately got slammed by an asteroid.

Ethan Chappel, an astronomer captured the slam. Th Sight caputured by large telescope indicate the that the massive planet got hit by a large size asteroid.

Jupiter, named after the King Of Gods in the Roman mythology. The planet resemble after Zeus, King Of Greek Pantheon. Back in 1610, Jupiter totally changed our vision of seeing the universe.

In 1610, Galileo discovered the massive planet. Galileo that time proved the four moons of Jupiter, i.e., Callisto,Europa, Lo and Ganymede. That was the first time when people witnessed the existence of celestial bodies en routing the Earth.

Jupiter is more than twice as enormous as the various planets consolidated. Its gigantic size can even hold up to 1,300 Earths. A planet made entirely of Helium and Hydrogen, resembling a Sun kind of atmosphere.

Extraordinarily know for its Great Red Spot on the planet indicate the massive hurricane like storm that existed on the planet for more than 300 years. The planet is known to broadcast radio waves, detected by the Earth’s frequency.

Gravity in the planet enabled it to outline our entire solar system. Its gravitational forces are more responsible for driving both Uranus and Neptune outwards. Top scientists revealed major planets played an important role in the motion of the asteroids.

Studies revealed that Jupiter, alongside Saturn, shaped the asteroid movement. Jupiter may likewise help shielding the Earth, from several asteroid attacks. Lately it also determined that it retain some quite huge effects.

Gravitational forces of Jupiter largely influence several asteroids clustered round the areas going before and after it on its circle en-routing the Sun.

Back in 1994, July 16-22, when a major crash took place when Comet Shoemaker Levy-9 hit the planet. Comet scientists recorded the movement and revealed that Shoemaker Levy-9, got too close to the Earth.

Even they were able to view the dispersed fragments of the crash that took place. The after effects on the Jupiter’s climate were hotter than the Sun’s surface.

Astronomers David Levy, Carolyn and Eugene M. Shoemaker discovered the comet in 1993. They observed the comet to be circling Jupiter that time. In the history, it was first ever comet to be spinning round Jupiter since its existence. The collision was the initial one in the entire solar system till date.

The comet crushed into the Jupiter surface with a force of 300 million nuclear bombs. The parts made immense crest that were around 2,000 to 3,000 kilometers high, and warmed the climate to temperatures as hot as 30,000 to 40,000 degrees. Shoemaker-Levy 9 remaining dim, ringed scars that were gradually diminished by Jupiter’s breezes.

The event went viral on social media, and certainly several astronomers round the world kept a close watch on the comet. The crash turned out a significant one determining the role of Jupiter in reducing the space debris in the inner solar system.

While conducting the experiment, the astronomers also discovered the presence of near Earth objects.

The recent crash reminded us all of the July 2009 event, when an asteroid or comet at the point tore another opening in the gas mammoth the size of the Pacific Ocean.

Referred to as Wesley sway, that cause behind planet’s climate dark spot. The spot was comparative in region to the planet’s Little Red Spot, around the size of the Pacific Ocean.

Ethan Chappel, was on the lookout for Perseid Meteor Shower. But ended up catching the sight of the rare asteroid that hit the Jupiter surface.

He put on significant images on Twitter indicating the recent crash that took place on 7 August, 2019 at 4:07 UTC. The images revealed a small white spot that eventually left its mark on Jupiter.

The astronomer captured the event with the usage of his Celestron 8 telescope,the white spot indicated the crash which later faded away. When the event took place, a flash of light was observed by the astronomers and sky watchers in the planet’s South Equatorial Belt (SEB).

Several other astronomers also questioned its impacts. The flash denoted that the collision was minimal. But its certain that comparing the size of the gigantic planet,the meteor has to be big enough to have produced such effect of the planet’s surface.

The Planet As Earth’s Guardian-

Back in 1941, George Wetherill, a scientist proposed the idea of Jupiter as the Earth’s protector. The scientist further determined that the planet’s gigantic size which is around 300 times of the size Earth has,is capable enough of protecting the planet from any further happenings.

Other scientists have also determined that the Jupiter’s gravitational forces can even lower down the presence of dangerous asteroids spinning round the Earth.

You might also like to read about Sun Conjunct Venus 2019 to know more about its effects on an individual.