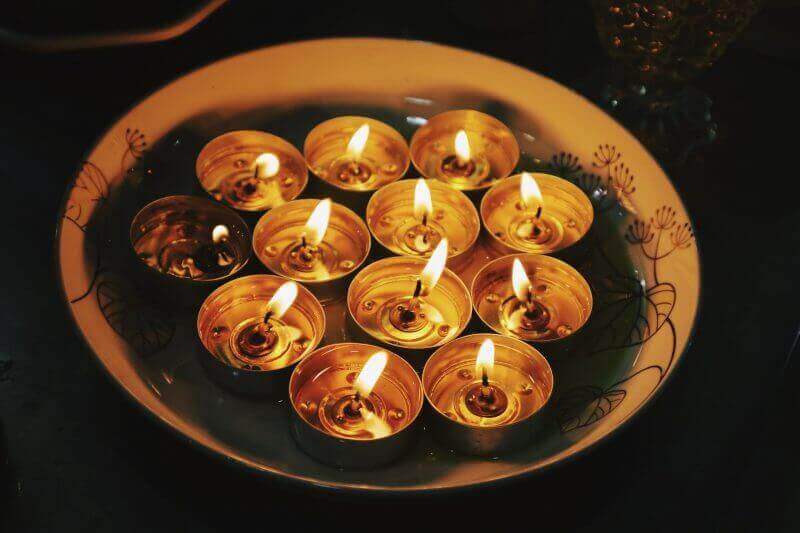 She is the allegory of prosperity and He is the lord of both art and science. May Goddess Laxmi and Lord Ganesha shower their grace on one and all on the festival of Diwali 2022.

Diwali or Deepawali is a Hindu festival with a luminous recognition across the globe. This festival has a special mention in foreign countries for the way of celebration. It is one of the biggest festivals in India. Therefore, on this day the entire country lights up millions of Diyas (earthen lamps).

The festival of Diwali is celebrated in the month of Kartika and it falls on the thirteenth fortnight on the Hindu calendar. However, according to the Gregorian calendar, the celebration falls in the month of October or November.

The celebration of Diwali is dedicated to the homecoming of Lord Ram after an exile of 14 months with his brother Laxman and wife, Goddess Sita. Also, the celebration includes lighting earthen lamp with Ghee, decorating homes with Rangoli & flowers, and worshipping Lord Ram, Goddess Sita, Goddess Laxmi, and Lord Ganesha.

As a matter of fact, the festival is held on the darkest night of the month and people light up lamps to illuminate the light of the moon to welcome Lord Ram and Goddess Sita. Thus, people believe removing darkness by lighting Diyas all around. Also. Diwali is the festival of eliminating evil vibes by worshipping God. It is the festival that enlightens people.

Diwali is the festival of Lights and its celebration takes place to commemorate the triumph of Lord Ram over the demon king Ravana and coming back home.

The name Deepawali comes from the language Sanskrit and it means “row of lights”. On the evening of Deepawali, people light up dozens of Diyas, candles, flowers, and colors. It lightens the homes, temples, and streets on a dark night.

In major portions of India, Diwali is a five-day festival among which third is considered the most important because it is the day people celebrate Deepawali by worshipping Gods.

Diwali brings the joy of other festivals as well. Celebration of Dhanteras, Deepdan, Govardhan Puja, and Bhai Dooj enters the air with preparations of Deepawali. It is a five-day-long festivity falling all together to spread joy.

Diwali holds a huge religious, cultural, traditional, social, and economic importance. This festival amalgamates people together despite their differences. Also, the celebration of Diwali brings feelings above religion and region differences and discriminations. On this day, faith in righteousness and goodness adjoin people. In India, people from all the sections celebrate Diwali in their own way. This festival has many names similar to Diwali.

C has a significant relation with nature as well. From the day of Diwali, the environment is set free of the distorting insects. Folktales mentions, with the light of Diya insects, travel to the end and their destiny.

As per the Hindu Mythology, Diwali is alluding to asDeepapratipadutsava. The tales state, in the seventh century for the commemoration of the marriage of Lord Vishnu and Goddess Laxmi newly married couples receive lamps as a gift.

It refers to Dipamalika in the ninth century work of the poet Rajashekhar. This tale mentions traditions of cleaning homes and decorating with lamps. It also tells about the Persian traveler Al- Biruni’s 11th-century chronicle on India.

On the very same day, people celebrate the homecoming of Lord Ram and Goddess Sita from an exile (Vanvasa) of 14 years. To celebrate the return of their beloved king Ram the public of Ayodhya lights the lamp in the city. To remember the day of Lord Ram’s return, people from all over the world celebrate the festival of Diwali.

The festival of Diwali takes place for five days. On the third day, people celebrate Diwali with lighting lamps and decorating their homes with colorful flowers. This day includes worship of the supreme deity Goddess Laxmi and Lord Ganesha.

The First Day of Festivity-

This day has the denotation of worshipping to the Gods for wealth and prosperity. The first day of celebration is known as Dhanteras.

It is an amalgamation of two words “Dhan” meaning wealth and “Teras” meaning the thirteenth day of a lunar fortnight in accordance with the Hindu calendar. The celebration of this day is dedicated to the celebration of affluence. According to the Hindu mythological tales, on this day Goddess Laxmi comes out of the churns of the ocean. People welcome her in their lives by offering her Puja and offerings. Purchasing gold and ornaments is an auspicious and important part of this festival.

In the southern portion of the country, on this day people dedicate their devotion to Dhanvantari. He is believed to be an incarnation of Lord Vishu. People worship him for bringing Ayurveda in existence. This year the festival of Dhanteras 2022 will fall on 23rd October.

The Second Day of Festivity-

This day is popular as Chhoti Diwali or Naraka Chaturdashi. In Hindu mythology, on this day, Goddess Kali and Lord Krishna destroy the demonic being Narakasura. On the day of Chhoti Diwali, people burn effigies of demons to celebrate.

The festival of Naraka Chaturdashi 2022 or Chhoti Diwali 2022 will fall on 24 October.

The Third Day of Festivity – Diwali 2022

This is the main day of the festival and major rituals fall to take place on this day. The third day is the new moon day called Amavasya. This is the darkest day of the month. People worship goddess Laxmi on this day because it is the day people pray to the Goddess to enter in their life and shower her blessings.

In West Bengal, Odisha, and Assam this festival falls a day earlier than the north. This year the festival of Diwali 2022 or Deepawali 2022 falls on Saturday, 24 October.

The Fourth Day of Festivity –

This day of the festival has numerous meanings across the country on the basis of the difference between the custom of each region.

As a matter of fact, it has the recognition of Govardhan Puja. The fourth day has an association with Lord Krishna in the tales. In mythological tales, on this day Lord Krishna defeats Lord Indra, the God of rain and thunder.

The Fifth Day of Festivity

According to the Hindu custom, the concluding day of five day festival of Diwali is known as Bhai Dooj. This day is dedicated to the bond of brothers and sisters. On this day, people worship Hindu Gods and distribute offerings. Bhai Dooj 2020 will fall on 6 November

Diwali has a special significance in eating stuff. People from all the communities may not burst crackers or light lamps. However, everyone serves delicious dishes on the occasion of Diwali.

So, here are a few suggestions on what you may try this Deepawali-

Diwali 2022 across the Country

Primarily, followers of Hindu, Jain, and Sikhs celebrate Diwali. However, in the entire country, people observe a public holiday on the occasion of Diwali. Therefore, this festival has religious respect from the people across the globe.

As a matter of fact, the public of the United Kingdom, United States, Australia, and Singapore from different communities also celebrate the festival of Diwali. Nevertheless, the celebration in Indian cities is the most popular.

Moreover, on the night of Diwali, when the sky is dark, people light candles, clay lamps, lanterns, and places everywhere in their home to attract goodness and seek the blessings of Gods. However, in some areas, people float Diyas in the lakes because of their belief of offering light to Gods and ward off the evils.

In the point of fact, Diwali has a prominent place among all the Hindu festivals because it indicates the victory of light over the darkness and victory of good over evil. Also, it takes the cropping season along with the lighting celebration.

The auspicious time of Diwali Puja comes after sunset. Also, on this day, several sections of people like businessmen and shopkeepers worship pen, ink, computer, tables, and other respective utilities.

Diwali 2022 Date and Next Four Years

The festival of Diwali 2022 falls on 24th October. Also, dates for Diwali Next Five Years-

Consult the best astrologers of India for detailed information about festivals and rituals.