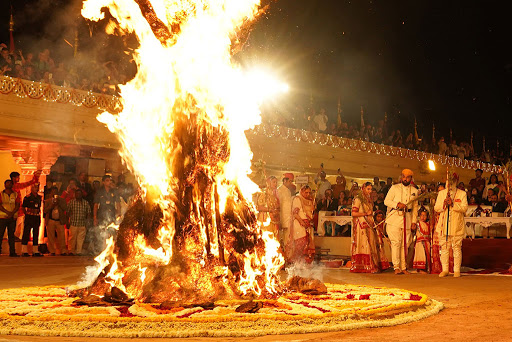 Identical to the Hindu culture of celebrating good over evil, the festival of Holika Dahan resembles putting an end to our evils.

Typically, the grand Hindu festival Holi is celebrated for a duration of three consecutive days. The first day of celebration marks Holika Dahan. Keeping with the ancient tradition, pryers collect wood, assemble them in particular order. Further, in the evening, on a specific Muhurat of Holika Dahan, they collectively worship around the wood by setting it on fire. Alongside offering sweets, coconut, wheatgrass, devotees also burn their negativity in the bonfire.

According to Hindu Calendar Panchang, the festival of Holika Dahan falls on the Purnima or Full Moon of Phalguna Month. This year, Holika Dahan 2020 is taking place on Monday, 9th March. The next day, Holi the grand festival of colors and delectable dishes is following on 10th March Tuesday.

Celebration of holds a great significance among the Hindus. It is a tradition that depicts the death of Holika, sister of Demon King Hiranyakashyapu and wondrous evacuation of his son Prahlad. In Indian mythology, the rituals of Holika Dahan includes lighting Diyas in the form of Holika Deepak. Furthermore, devotees recognize this festival by the name of Chhoti Holi.

Like any other Hindu festival, choosing the correct Holika Dahan Muhurat is quite significant. Offering worship and performing the Dahan at the wrong time doesn’t bring any well being and fortune to the life of a person. Nonetheless, the wrong Muhurat adds in the misfortune in a person’s life.

Significance of Astrology in Holashtak

In the words of Expert Astrologers, from Phalguna Shukla Ashtami to Purnima (full moon) the position of the planets is fierce. Moon On Phalgula Shukla Ashtami, Sun on Navami, Saturn on Dashami, Venus on Ekadashi, Jupiter on Dwadashi, Mercury on Trayodashi, Mars on Chaturdashi, and Rahu on Purnima has a fierce position. During this time, the planets impart tremendous disbalance in the life of people. Commonly, they face hindrance and stress.

Prohibition of Auspicious works in Holashtak

Things to Do in Holashtak–

The duration of Holashtak is inauspicious for performing any religious act. However, it is a perfect occasion to perform donations and charity. By helping poor, donating them food and clothes and serving in temples you can gain blessings of god. Also, it adds in fortune and good karma.

The mythology of Holika Dahan

There are numerous reasons behind the celebration of Holika Dahan. However, the prime motive to celebrate is to commemorate the triumph of good over bad in every form.

In accordance with the Hindu mythology, the occasion derives its name from the name of King Hiranyakashipu’s sister Holika. Whereas Dahan means burning. One of the most popular mythological tales mentions, Hiranyakashipu had the boon he could not die by anything born of a living womb, neither by any man nor by any animal, neither in the day nor in the night, neither inside nor outside, neither in air nor on the ground nor in water, also, nor by any arm.

Gradually, he was filled with ego and pride. Thus, he could not take any human worshipping any other god than himself. However, his own Prahalad takes birth after a while. As Prahalad heard Narada’s chanting while he was in his mother’s womb, he becomes a great devotee of Lord Vishnu. Regardless of great effort of his father, Prahalad selflessly worshipped Lord Vishnu.

Angered by this, Hiranyakashipu orders his sister Holika to sit in the fire with Prahalad in her lap. Holika had the boon that she would never be burnt by fire. However, with the intention of hurting an innocent, she sits in the fire. As a result of her demonic act, she burns in the fire. On the other hand, Prahalad comes out of it unharmed.

Later, Lord Vishnu takes the incarnation of Lord Narasimha who is half human and half lion. Further, he slaughters Hiranyakashipu on his lap while standing in the middle of a door. It puts an end to the evilness of the king.

The ritual of Holika Dahan commences on the day of Muhurat. However, devotees start to prepare woods for bonfire many days prior to the celebration.

According to the Hindu calendar Panchang, Phalugan Month is the last month of Hindu Year. Thus, the Phalguna Purnima is the last Purnima (full moon) and last day of the year. It also celebrated the end of Holashtak. With a great social as well as religious significance, a great number of devotees observe fast on this occasion.

Also, you may like to read about Holi 2020- Date and Significance Of the Festival

Connect here with the best Astrologers of India to learn more about Hindu Festivals.