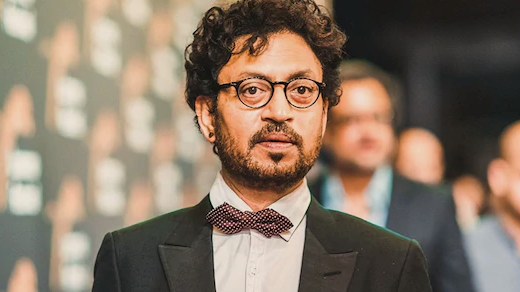 इरफान खान/ Irrfan Khan was a legendary Indian actor. He worked in many Bollywood as well as Hollywood films that will be remembered for a long time. He was one of the most popular Actors around the world and was critically acclaimed for his mesmerizing performances in his films. Irrfan is also credited as SIMPLY IRRFAN.

His popularity grew and Irrfan became a globally famous face. As he started to climb the ladder of success in the world of Cinema, his contribution had no limits. He walked and walked and walked to give his best. In his 35 years of career, Irrfan Khan featured in numerous award-winning films including Paan Singh Tomar, Hasil, Maqbool, Haidar, The Lunchbox, Piku, and Hindi Medium, etc. Besides, what was so special about Irrfan Khan? What made him shine differently amongst others is his background.

Irrfan Khan belonged to a common Muslim family of Tonk District, Rajasthan. In 1984, everything changes as he earns his scholarship to NSD (National School of Drama). The curiosity to take a glance in the world of entertainment always had Irrfan’s interest. Following the same, he came to Mumbai. After a due struggle, he got featured in Chanakya, Bharat Ek Khoj, Sara Jahan Hamara, Chandrakanta, Banegi Apni Baat, Shrikant on Doordarshan, AnooGoonj on Doordarshan, and Sparsh. However, these were only the early days of his career. He waited and put his heart into big things to make his way in the clouds of popularity. After many many years of struggle, Irrfan finally made it to the big screens. Further, he sailed to all the big awards including Filmfare, IIFA, and Padma Shri.

Today, 29th April 2020 is a sad day for the entire World and Cinema. The legendary actor, Irrfan passes away at the age of 53 in the morning around 11:30 am. Across the globe, tributes are pouring. People are sad. As Irrfan was fighting the disease for a very long time, his fans were hoping for him to recover and return on Screens. However, he left his fans in tears and bid farewell from this realm.

The most intriguing fact about Irrfan Khan is he is the only Indian actor who passed out from NSD and clutched success in both Art and Commercial Cinema.

He was the only actor in Bollywood who would take any role and immerse in the character completely. Be it from Paan Singh Tomar or Jurassic Park, nobody could say he did not make it up to the character. A rare fact about Irrfan Khan that many people have no idea about is his deep desire to share the screen with American beauty, Angelina Jolie. He always wanted to work with her. Owing to his skills, his dream came true in 2007 with Hollywood film A Mighty Heart.

Besides, his indulgence in the role had a lasting impact on audiences everywhere. He embarked on his journey from debut role in Salaam Bombay and kept working til couldn’t any further in his last film Angrezi Medium.

Not only on a professional scale, indeed, in personal life Irrfan Khan was a real hero. His real-life story is as touching as his acting in films. Irrfan married the woman he loved. Besides being a Muslim, he married a Hindu woman. In 1995, despite his little freedom and success, Sutapa Devendra Sikdar said yes to marry him. Ever since she shared all of Irrfan’s success, struggle, and fought bravely with the impact of tumor till the Irrfan’s last time.

Irrfan was diagnosed with a neuroendocrine tumor in 2018. On March 16th in 2018, Irrfan himself announced his disease through a Twitter post. Further, he traveled to London for his treatment. According to the reports, Neuroendocrine tumor which is a rare form of cancer that can target various parts of the body.

Since then, the media have tried to bring in front of people about his conditions. Amid his sickness, he wrapped his last venture Angrezi Medium with Homi Adajania.

With the first look of this film, Irrfan sent his fans a heartwarming message in the midst of his treatment. Thus, his fans were hoping for him to recover. However, his conditions were turning critical for the past few days. His family carried him to the hospital this morning in rush. After a few minutes, he was in ICU and the news spread among everyone. In an hour his spokesperson informed that Irrfan is not yet gone in his sleep. Despite the struggles of doctors to save him, on 29 April 2020, Irrfan Khan passed away at Kokilaben Dhirubhai Ambani Hospital and Medical Research Institute, Mumbai.

Moon– The Moon signifies the mind. With his moon placed well in the Chart, Irrfan was ensured about his loved ones. He has a sense of love for and around him.

Mercury– With the blessings of Mercury, Irrfan Khan would memorize his scenes and indulge in characters. Along with this, he came up in front of people with a sweet, witty, and humorous manner.

Saturn– Especially, Saturn governs the area of hard work, success, and discipline. As a matter of fact, Irrfan was one of the most hard-working and well-disciplined actors. With the grace of Saturn, he was paid well after his years of struggle.

Dear Irrfan Khan, you were everything to be loved about a cinematic experience. You were the start of the Indian Cinema. And you will shine wherever you are today and forever.

Irrfan Khan was a legend of the Indian Cinema. His death is the greatest loss for India.

Further, you may like reading about Must Watch! Bollywood Movies

Remedies to Please 9 Planets To Get Rid of Problems
Views: 24744