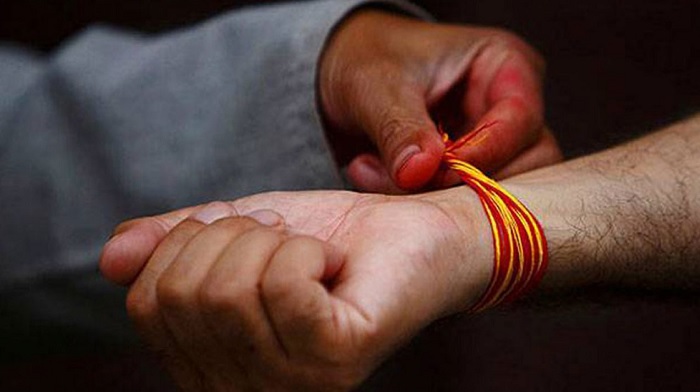 All religions have their own different customs and rituals revere god. Whoever walks the righteous way, gets the benefits of following them. These customs are not only religious beliefs but also have a relation with scientific benefit. There innumerable eastern and ancient traditions that people research in different parts of the world. In Hinduism, it is custom to tie a Kalawa or holy red thread on the wrist in the religious ceremonies. Today, we shall tell you about the benefits it can bring in your life.

According to ancient Hindu scriptures, the beginning of tying the holy red thread was started by Lakshmi Devi and King Bali.

It is a thread of protection, thus in Hindi, it is also called the Raksha Sutra. People tie this thread to protect themselves from harm. According to ancient beliefs, tying it on the wrist helps to avoid any possible problems. Tying the Kalava keeps the person receives the blessing of the Hindu holy trinity Brahma, Vishnu, and Mahesh. Apart from this, the thread pleases the three goddesses Saraswati, Lakshmi, and Parvati.

According to the Vedas, Indrani Shachi had tied a Raksha Sutra or Red thread on the right wrist of Indra Devta, who was going to battle with Vratasur. This thread is also called Mauli in the present time. In this war Indra Dev was victorious. From that day, Kalava or Mauli Rakshasutra originated.

People believe that Mauli or Kalava is inhabited by goddesses and gods, due to which it is considered auspicious and healthy to tie it on the wrist while worshiping. The yarn that Kalava is made of is made from raw cotton and can be of many colors such as red, yellow, white, or orange, etc. By tying it on the wrist, a person can receive great benefits.

Benefits According to Science

Many significant veins directly connect with the heart. According to traditional beliefs, the veins through the 4 fourth finger connects with the heart. Thus, tying a Kalawa or Red Thread helps you control these veins. It can also help in removing Tridosha. Apart from this, tying molly or Kalwa on the wrist can benefit in relieving health-related problems like blood pressure problems, diabetes, heart disease, and paralysis.

Things to keep in mind

While tying Kalawa, it is very important to keep a few things in mind.

Also, you may like reading about Remedies for Weak Sun in Horoscope