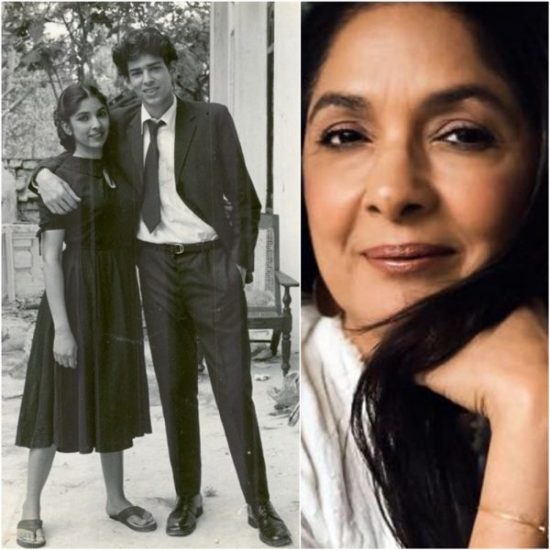 Neena Gupta, the focus and favorite face of excellent Comedy, Drama Badhaai Ho is immensely popular for her acting brilliance and brave statements.

Recently, Neena Gupta slammed the directors of the upcoming Bhumi Pednekar and Tapsee Pannu starrer “Sandh ki Ankh” for making a film that showcases the narrative of two extremely bold women from the rural section of the country. She made a statement that the directors can make films about 50plus women; however, they cannot cast the women of the same age for the movie as it reduces the glamour factor and face value from their multi-millennial film.

Further, popular faces like Soni Razdan and Sheeba Chaddha praised her bold statement. Also, they joined her and made a similar speech about the director and producer of all “Sandh ki Ankh”.

Neena and Nikhil in Trikal

Alongside being a flawless Bollywood actor and star, Neena Gupta is a reliable friend who often shares pictures with loved ones. This is one of the ways of the bold lady to portray love in front of the world. Similarly, she shared an adorable picture of her and Nikhil Bhagat from the era of the mid-80s.

As a matter of fact, the Shyam Benegal direction Bollywood film Trikal knocks theatres in 1985. Along with a star cast of multiple brilliant actors, it was a critically much-acclaimed piece. In the film, Neena Gupta had played the role of Milagrenia. On the other hand, Nikhil Bhagat had played a young Ruiz Pereira (young Naseeruddin Shah).

The striking black and white picture give a hit of nostalgia from the shoot of Trikal starring Leela Naidu, Neena Gupta, Anita Kanwar, Soni Razdan and many more old golds. Further, within an hour of upload, the picture received a bulk of hearts and love from all the fans, family and friends.

Neena captioned the image “#Throwback Me and Nikhil in #Trikal Where are you Nikhil, what do you look like now?”. Upon this, Neena Gupta’s on-screen son Ayushmann Khurrana from her top hit Badhaai Ho dropped a Yellow heart emoji symbolizing his affection for the beautiful picture of Neena and Nikhil. However, her fans dropped plenty of comments to express their fondness for the film.

Further, many fans and Bollywood people replied to her question from the caption and informed her about Nikhil Bhagat’s appearance in 2015 Deepika Padukone and Ranbeer Kapoor starrer, Tamasha. Bhagat played the role of Deepika’s character Tara’s father.

For now, Neena is all busy in the shoot of her upcoming Shubh Mangal Zyada Savdhan along with Ayushmann Khurrana, Gajraj Rao, and internet sensation Jitendra Kumar. Also, she shared a picture of herself with one of her favorite co-star Gajraj Rao meanwhile the rehearsals for a scene.

These were the major details about Neena Gupta the top Bollywood actor. Also, you may like to read about the enthusiastic star of India.