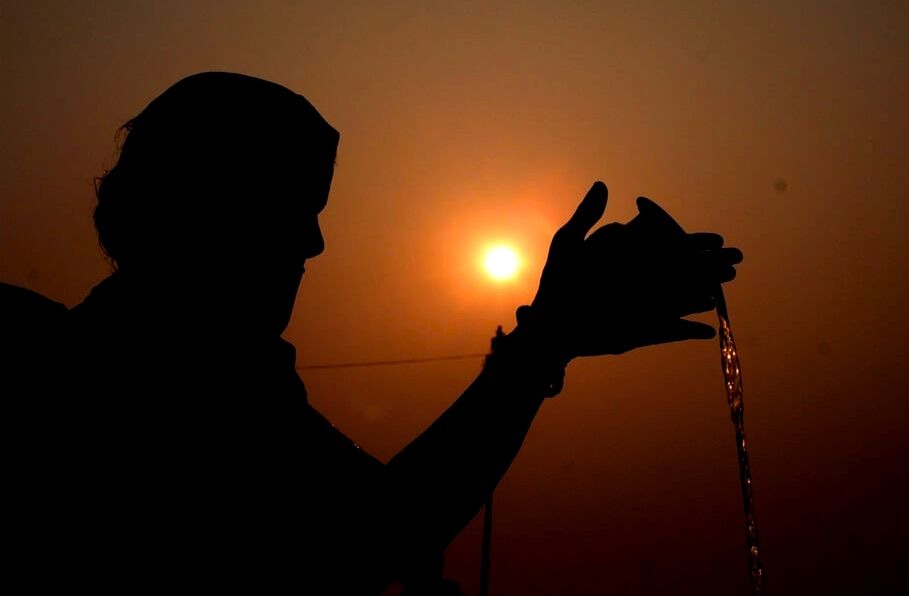 Across India, the land of cultural heritage and values, lacs of people leave their beds before the sunrise. They chant Mantras and offer water to Lord Sun. Worshipping the Sun is an integral part of the Hindu religion. Alongside Hindus, an uncountable number of people from other communities also pray to Sun. They seek well-being and blessings of the mightiest source of energy. Indeed, Sun is the most vital source for all existence. From changes of weather to the perpetual serve of life-source Sun governs everything on earth. The entire universe derives its vim from the Sun.

In many ways, Sun is considered the father of all the stars in the galaxy. Therefore, it has a paramount significance in Hinduism as well as Vedic Astrology. Bowing to the importance, everyday people practice numerous manners to offer gratitude to the Sun.

Offering water to Sun is one such approach. In the Hindi language, this practice is known as offering Arghya. It helps a person seek the blessing of Lord Sun or Surya Dev and get rid of numerous Doshas in their life. Incredibly, this small morning ritual can bring remarkable results to the lives of people.

Offering Water or Arghya to Sun

In Hinduism, it is an auspicious note to start the day by offering water to the Sun. As Lord Sun brings the illumination of positivity and warmth every morning, offering Arghya is a great way to offer gratitude. In ancient times, people would go to ponds and rivers for baths and offering Arghya. However, this ritual has limited to only prosperous events after urbanization.

In Astrology, Sun plays a vital role in forming the persona of an individual. It represents the soul, self-expression, ego. Sun also signifies pride, confidence, respect, father, elder figures, authority, and designation in a person’s life. With a strong and well-placed Sun in the birth chart, a person is blessed with confidence, good professional, and personal reputation. However, with a weak Sun, a person has to suffer with low-self expression and hurdles.

Often, they have to go through a sore relationship with their father. Therefore, expert astrologers recommend them to perform remedies for Sun. As a matter of fact, offering water to the Sun is one of the most powerful remedies to strengthen the Sun.

Planet Sun has a prestige of fiery and bold nature. Thus, by offering water to it a person can seek virtue of Sun. It is a humble ritual that can strengthen the position of the Sun in a person’s chart. Also, it attracts righteousness in them. Along with this, if a person follows this ritual during their Dasha period, all the destructive impacts of the Sun comes to an end in their life.

The relation of planet Sun with planet Saturn is well-known to everyone. Offering water to the Sun in the morning eliminates the malefic results of Saturn in a person’s life. As this remedy stabilizes Saturn and the person requires the virtues present in Saturn. They become punctual, disciplined, and hard-working. In astrology, the water element signifies Moon. Thus, offering water to Sun activates all the auspicious Yogas that Sun and Moon form together in a chart.

There are monumental amounts of texts in Vedas that specify the importance of offering Arghya to Sun. According to the texts, drops of water that a person offers to Sun in the evening further converts into stones. As they drop on demons, they slaughter evil from one’s life. Also, for people demons can be in the form of a disease. For instance, TB, Typhoid, etc.

Solar ultraviolet ( UV) radiation has been used to cure different illnesses since the old period. It has a scientific foundation in the fact that the overwhelming majority of molecules in various layers of the skin communicate with and absorb UV.

Each drop of water that a person offers to the Sun performs as a channel through which rays of Sun pass into their body. Further, the sunlight dissolves when it reaches a person’s body and then form seven different colors. These colors represent the Seven Chakras of the human beings. It protects them from several bacteria and improves eyesight. Offering Arghya boosts a person’s overall health.

Also, you may like reading Sun Transit in Leo 2020

Remedies to Please 9 Planets To Get Rid of Problems
Views: 19858