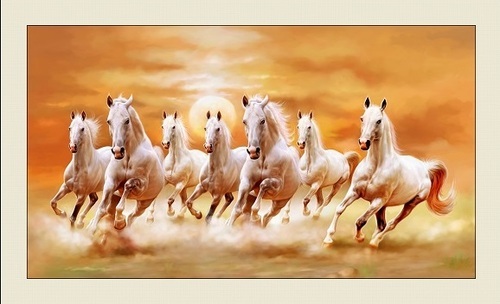 In today’s busy world, everyone wants to be successful. But, sometimes one is not able to achieve the fruit of his hard work. This doesn’t mean that he or she is making less effort. To be successful in life, one must believe in Karma and be healthy and energetic. If one is energetic and has the will to work, then he is sure to achieve success. In Vastu, it is explained energy can be negative as well as positive. The positive vibes in one’s surroundings lead to a happy and prosperous life. Vastu Shastra consists of various ways to bring luck and fortune to one’s life. One such way is the painting of the seven horses which is believed to bring speed and stability in one’s life. Now, you must be thinking, why seven horses?

The number seven holds a special significance and is considered a lucky number. The rainbow has seven colors, the bride and groom take seven oaths during their wedding in Hinduism and the seven sages (saptarishi) of ancient India, all depict the number seven. This painting of seven horses has great importance and has many benefits. In this article, we will read everything about this auspicious painting.

The picture of seven galloping horses brings positivity in one’s life and remove the negative vibes. According to Vastu Shastra, this lucky painting balances energy in one’s house and seven horses are considered to symbolize peace, success, and progress.

1. The running horses are the symbol of speed. In this busy world where everyone wants to be successful, speed plays a great role. On hanging this auspicious painting, one can notice how quickly he or she is able to complete any task of his or her life.

2. According to Vastu, horses are also symbolic of success. So, this painting of seven horses ensures success in all the fields of one’s life.

3. This painting is also believed to bring financial stability.

4. The horse is associated with courage, endurance, and speed in Feng Shui as well. Hence, this painting is also considered important as it brings fortune.

5. Moreover, the painting of seven horses in a chariot along with Lord Surya is considered even more auspicious and brings one good luck.

Where to place it?

This lucky painting should be hanged on the East wall of one’s house. The poster of the horses can be hanged on the North wall as well. It leads to one’s promotion in the service sector and brings prosperity and wealth at home as well. Placing the painting on the south side of one’s home brings one name and fame. Also, it creates a positive environment in one’s home and makes one successful in life. If somehow, one is unable to place the painting on the south side, it is advisable to hang this lucky painting in the front of your home’s window as such that the horses are looking out of the window.

Things to be taken care of

Horses are believed to bring good luck, but not always. One needs to take care of the following things while hanging a painting.

1. Never ever hang a picture of a single horse in your home. To clarify, it is considered inauspicious and stops the wealth from entering your home.

2. In the painting of seven horses, one should carefully see none of the horses has a rope tied on its back as it is also considered inauspicious.

3. In the painting, the horses must be running on the land and the full image of the horse must be completely visible. Never hang the one in which the shoe of the horses is not visible.

4. The horses in the painting must not be angry but should depict happiness and courage. Also, there should be symmetry in the galloping horses.

5. In addition, hanging this picture in one’s study room, temple, bedroom, on the main door, or near the washrooms is not advisable.

Also, you may like to read Your age and the planets, what’s the connection between the two?