Panchang- The Most Prestigious Hindu Calendar 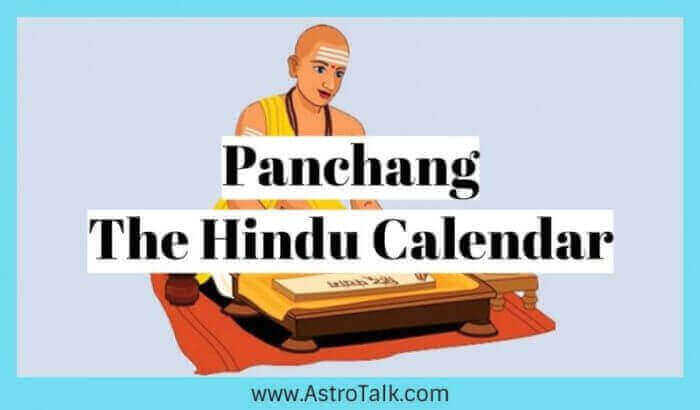 Panchanga or Panchang is a Sanskrit Word consists of two words “panch” means five and “ang” means parts, these 5 parts are as follows: Tithi, Vaar, Nakshatra, Yog, and Karana. The basic purpose of Hindu Panchang is to check various Hindu festivals. In Assam, Bengal, Odisha people refer the Panchangam to as Panjika.

defines “day”, the position of the moon at Sunrise. The calendar shows ending point of time for the tithi that was active at Sunrise.

It defines “stars on that day”, the position of the star at Sunrise. Calendar show sending point of time for the nakshatra that was active at Sunrise.

It defines “probability”, time period prevalent in a day and the calculation takes place by adding the longitudes of Sun and moon and dividing it into 27 equal parts.

The Karan defines “work being done” or Half of the tithi, they are 11 in total and rotate.

The Vaar defines a week.

The casting of a Panchang involves mathematical work with a high level of spherical geometry and astronomical phenomena, such as sidereal movements of heavenly bodies. However, in practice, the tabulation takes place on the basis of short-cut formulations similar to ancient Vedic sages and scholars.

It may state tabulations of positions of Sun, Moon, and other planets for every day of the year on a fixed place (longitude, latitude) and time of day (24-hour format IST). The users calculate the remaining data using their relative difference from this fixed place and time.

There are several Panchang that contain information for more than one year. There is one Vishva Vijaya Panchang that covers 100 years. It usually indicates the bad periods to bypass, like Rahu kalam, Durmuhurtham, and Varjyam. As a matter of fact, one requires to have the wisdom of Astrology for casting a Panchang.

The Rahu Kaal or the period of Rahu is a certain period of time every day.
According to Vedic astrology, this time is immensely infelicitous for any new venture.

The calculation of the segments takes place by taking the total time between sunrise and sunset, at a given place, and then dividing this time duration by 8. However, Astronomically in the Hindu Panchang, the ever-varying planetary configurations mean that the auspicious hours during each day will not always fall at the same moment of time.

It is the deficient time of the day to complete or commence any work. Also, it is an unsuitable period for starting any new thing. According to the Hindu Astrology, the work may result in something bad.

It occurs every day based on the nakshatra. The calculation on the basis of a small portion of degrees of every star (nakshatra).

There are theories related to Panchang named as Surya Siddhanta and Grahalaghava formed the basis for the myriad calendars in the past in different regions of India.

The compilation of Grahalaghava takes place about 600 years ago and Surya Siddhanta was available more before that. These had become outdated and did not tally with actual astronomical events or each other.

Hence, the Government of India appoints a committee of experts in the field who draw roots from various parts of the country along with their involvement in the preparation of Panchang in local languages. They serve the motive to cast a reliable Panchang in which the mathematical calculations provide the positions of the planets and the constellations.

Let us know what each of the parts means in brief:

The calculation of Tithi is based on mathematical activity. A Tithi is an angle between the Sun and the moon. The angle of 12 degrees makes one Tithi. Sun and moon both are always in motion.

The Mighty Tithis of Panchang

Ganpati is the Lord of 4th lunar day, which is good for the destruction of one’s enemies, the removal obstacles, and acts of battle.

The Naaga (Snake) rules this day, which is favorable for administering medicine, the purging of poisons and surgery.

Kartikeya presides over this day, which is favorable coronations, meeting new friends, festivities and enjoyment.

Surya rules The 7th Lunar day; one may begin a new journey, but carries the deal with movable nature.

The Rudra rules this day, which is good for taking up arms, the building of one’s defenses, and fortification.

The Ambika rules this day, which is good for taking up arms, suitable for killing enemies, the act of destruction and violence. Inauspicious for ceremonies and journeys.

The dharma raj rules the day. Therefore, it is auspicious for acts of virtue, religious functions, spiritual practices, and pure activities.

Rudra rule this day; fasting, devotional activities, and remembrance of the supreme lord are very favorable.

kali rules this day, suitable for regulating poison and calling for elements and spirits.

The pirtu-devas rule the new moon, suitable for the propitiation of the manes and performance of austerities. Purnima is ruled by the moon.

The calculation of Tithi occurs on the basis of the formula. Therefore, if the quotient result is between 1 to 15, then the Tithis will be of Krishna Paksha. If the quotient obtained is more than 15, then the Tithis will be of Shukla Paksha. Let us assume that we have got 17 after calculating with this method, this means that it is the Dwadashi Tithi of Shukla Paksha.

Hence, as an important note, the beginning of a month in northern India depends upon Krishna Paksha.

These constellations or the Nakshatras emerged as one of the most important components in Astrology.

Vedic astrology identifies each constellation with a star. The 360-degree division of the sky is therefore further divided into 27 subdivision of 13.20 degrees identified with 27 stars. Each of these Nakshatrasis again subdivided into four Padas (quarters of 3 degrees and 20 minutes).

Look at the position of the moon at the time of birth or when any other activity is happening. Let us assume that the moon is in the ninth sign and its Bhoganha is 6 degrees 5 minutes. We will now convert it into minutes. After converting it into minutes we will divide this number by 800. This means the completion of 20 Nakshatras and the 21st Nakshatra is running.

The 21st Nakshatra is Uttara Ashadha Nakshatra. In this way, you can calculate the other Nakshatras also. The digit before decimal represents the number of Nakshatras which are passed. If 5 come before the decimal, then it means that 5 Nakshatras are passed and the sixth Nakshatra is running.

A Vaar(day) is from one sunrise to another sunrise. All the days including Monday, Tuesday, Wednesday, Thursday, Friday, Saturday and Sunday are known as Vaars.

The fourth part of a Panchanga is Yoga. The basis of calculating this is the position of Sun and moon. The Yogas are of 27 kinds. It gives results according to their names. One adds Bhogansha of Sun and Bhogansha of the moon to calculate the Yoga. Then divide the sum by 13 degrees 20 minutes. Converting 13 degrees 20 minutes into minutes we get 800 minutes. Divide 800 minutes by the number thus obtained that’s how yoga is calculated.

This is the fifth part of a Panchanga. It is considered to be half of a Tithi, hence, there are two Karana in a Tithi. The fixed Karanas come once in a month. Is the petition of 7 Karanas occurs? These Karanas occur for 8 times in a month. There are total 11 Karanas in Astrology; Bava, Baalav, Kaulav, Taitil, Gar, Vanij, Vishti, Shakuni, Chatushpad, Naag, Kinshtughna. The first 7 Karans are known as’Char’, which means variable and the last 4 Karnas are called as ‘Sthir’ which means constant.

Last 4 are known as ‘Sthir’ because they always come in a specific period starting from the second half of Krishna Paksha (Dark Fortnight) Chaturdashi and ending with the first half of Shukla Paksha (Bright Fortnight) Pratipada.

First 7 Karanas are known as Char, because they arrive repeatedly, in a specific sequence, covering the period starting from the second half of Shukla Paksha (Bright Fortnight) Pratipada and ending with the first half of Krishna Paksha (Dark Fortnight) Chaturdashi.

Now the lunar calendar is subdivided into the two parts one is Kartika month and counted after Purnima till next Purnima. Hence it is called the Purnimanta. This is popular in North India. The other starts with the month Chaitra and counted after Amavasya till the next Amavasya. Hence it is called Amavasyanta or Amananta calendar. This is popular in South India.

Sadhya is the promising yoga which falls in Shukla Paksha. Venus (Shukra) is the planet which is responsible for ruling this Yoga. Sadhya means attainment. A person having this Yog will be strong in his or her decision making and will stick to the decisions made by the native. Patience plays a predominant role in native’s life to accomplish any task which he or she desires for.

Few traits which one should have:

It’s is to be noted that person will fulfill things without much of the labor, Destiny here will play its role in his or her favor. Where Karana is Garr which comes under movable Karanas in Panchang which is benefited and is ruled by land, in addition, it shows that the person of this Karana will be a good strategist, imaginative and talkative.

“Whatever I am offered in devotion with a pure heart- a leaf,a flower, a fruit or water- I accept with joy”

The Kalawa/mauli you are wearing right now, what does it signify? The black thread on your ankle or the yellow thread on your chest. What’s the role of this?

Well to know more about our Hindu Religion and its tradition, read out to our next article “Importance of a Thread in Hinduism”.

Consult the best Astrologer of India to know your Panchang 2020 and seek their guidance to the right path of your life.