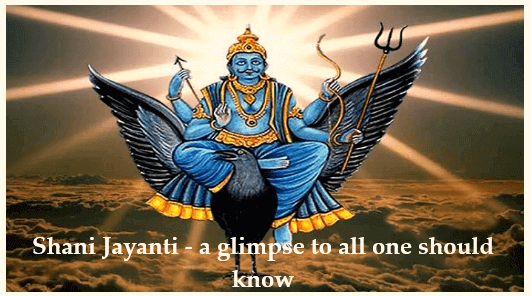 Along with this, he signifies the forfeit, spirituality, discipline, and hard work. Being one of the majorly impacting Planets of Vedic Astrology, it affects the life of native in many ways. However, if the planet Saturn or Shani makes a person put effort into something, he never allows the native to go with disappointment. Lord Shani makes people learn discipline and in return, he offers great results.

The celebration takes place in a global manner in which people from several regions and religions take part. On this day, people cook traditional Hindu food and perform rituals to offer prayers to Shani Dev.

In the tales, Lord Sun or Surya Dev marries to Sandhya, Daughter of Daksha. They together have three children namely, Manu, Yam, and the Yamuna. With time, Sandhya feels diminutive in the companionship of her prevailing husband. Upon this, she creates a female figure Chaya with her shadow. She allots Chhaya responsibility of being the wife to Surya Dev.

Celebration of Shani Jayanti 2021 across Different Regions of the Country

In some places, the festival of Shani Jayanti is the most prominent Hindu festival. The Indian village, Shani Shingnapur has a strong association with the Shani Dev. Thus, here people celebrate the festival with great zeal.

Shani Jayanti 2021 Date and Next Years

This year, the festival of Shani Jayanti 2021 falls on Thursday, 10th May.

These were some major facts and information about the Hindu festival of Shani Jayanti and you may also like to read about Effects of Saturn in Each House according to Vedic Astrology.

Remedies to Please 9 Planets To Get Rid of Problems
Views: 25389