Shani: The God of Karma. 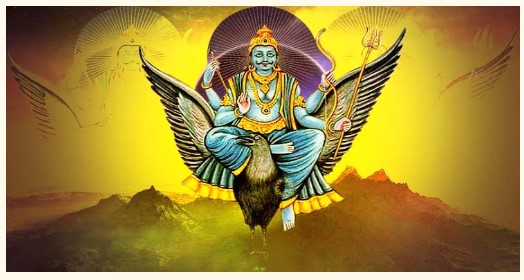 A thorough understanding of Hindu mythology proves that every planet was worshipped by our ancestors as they believed that these celestial bodies to play a very important role in our everyday life. Similarly, Shani is also a planet which has been given the form of Devta in our mythology.

As far as the effects and work of Shani Dev are concerned, he is believed to be a karma- phal- Data, i.e who gives the result of the sins and blessings one has committed in his lifetime.

Shani or also known as planet Saturn in Astrology exhibits a very interesting phenomenon. Physically, Saturn represents Shani Dev. He is also believed to be the brother of Yama and is considered the God of Justice and Karma.

According to the legend, the Sun god married Sandhya, who was a very faithful and devoted wife. Sandhya bore him three children, namely Manu, Yama, and Yami. Sandhya was a pure and committed wife. However, she felt it very difficult to stay in close proximity with her husband who was scorching hot every time.

Sandhya then created Chaya out of her shadow. The lady Chaya completely resembled her in every aspect. Ideally, the literal meaning of the word is a shadow. Sandhya gave over all her three children to Chaya, asking her to take care of sun god in her absence.

Sandhya took to penance for her unjustified action. To escape the heat of her husband, Sandhya escaped and came back to her father. However, Sandhya did not like this idea and her guilt was killing her internally. She, therefore, assumed the form of a horse and left for the thick woods to establish her severe penance.

Shani Dev was born of Chaya without Sun God’s knowledge. She bore three children to him, namely Manu, Shani, and Tapti. When he resided in her womb, she was totally lost in serving her husband and due to sun god’s heat, the baby in her womb was black in color.

Therefore Shani turned out completely black at birth. On his birth, the Sun god eagerly looked at him only to be disappointed by Shani’s charcoal color. He even doubted infidelity, whether Shani was born of him.

Shani’s first look at his father drove the Sun god to an eclipse and he deemed this to be bad luck. In fact, being furious at his father’s judgment, He cursed his father that he would turn black in color which came true.

Hence, right from his birth, there was a severely unhealthy relationship between Sun God and Shani.

Once Chaya was preparing food to offer to Lord Shiva. Being a stubborn child, Shani was very hungry and wanted food to be served to him first. Chaya scolded him that he could eat only after the puja was complete. He, in a fit of rage, kicked his mother.

Due to his sin, Shani’s one leg became inactive and he turned lame.

While Shani was born, his father doubted his birth, Lord Shiva appeared before Sun God and justified the reason why he was black. Both the father and son then developed a good understanding of each other. Pleased by Shani’s devotion, Shiva titled him to be the God of justice, to distribute the rewards and punishments accordingly for people’s actions.

Shani: the God of Karma

Saturn is a planet of Karma as he presides over the actions of every individual. Accordingly, it is believed that punishes bad deeds and rewards good deeds in the lifetime of a man. As a strict taskmaster, through punishment, he teaches justice, perseverance, discipline, labor, and endurance in difficult times.

Effect of Saturn in a Horoscope and astrology.

Saturn is believed as a planet that will govern over karma and dharma in any horoscope. He is supposed to enter one`s horoscope as the karmic Guru and will ensure that one thoroughly learns the life lessons and pass the tests of fate.

Saturn symbolizes struggle and adjustment and under his influence one faces the toughest challenges and hardships of life. He causes negative effects on the individual when he occupies positions in a horoscope like:

How the positions Decide fate.

Shani in the 12th, 1st and 2nd house from the Moon, which is seven and a half years called Sadhe Sati.

When Shani is in the 8th house from the Moon called Ashtan Shani.

To escape the negative effects of Saturn or Shani caused by the cycles of Shani, a man must propitiate him in many ways. His problems and struggles can only be overcome through sincere prayers and pujas to him.

Worshipping Hanuman especially, Dakshin Mukhi Hanuman is the best way to attract the blessings of Shani. Kalabhairava, an incarnation of Lord Shiva, can be worshipped to get protection against Saturn`s ill effects when he transmits the Lagna as it causes financial insecurities and health problems.

These were some major details about the planet Saturn. For more information, you may read Effect of Saturn in Each House.

Amarnath Yatra: An Opulent Voyage to Shrine of Shiva
Views: 1488