Solah Shringhar and its scientific significance 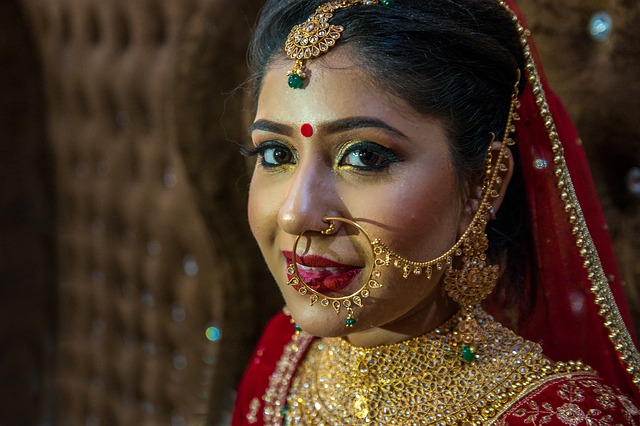 India is a land of unique customs and traditions. Such a custom is of Solah Shringhar for married women which have been followed for ages. Everything in it has a special significance and is quite different. However, not only it has religious significance, but scientific importance as well. Continue reading to know the scientific importance of everything included in Solah Shringhar

The word “Bindi” is originated from the Sanskrit word “Bindu”. It is a crucial part of the Solah Shringhar of women and is placed on the forehead between the eyebrows. Moreover, it is symbolic of the third eye of Lord Shiva. The married women consider it very important to place bindi on their forehead as it brings peace, wealth, and prosperity in the family. Science believes that by placing this dot on the forehead, the agya chakra of a woman becomes active. This helps a newly-wed woman in maintaining spirituality and boosts up her energy to take the new responsibilities.

Sindoor is symbolic of the married life of a woman and is significant in many cultures of North India. It is filled in the maang of the bride by the groom during their wedding. The Scientific benefit of Sindoor is that it helps in the regular blood flow. Also, it cools down the body and helps in maintaining body temperature.

It adds to the beauty of the eyes. However, apart from adding beauty, it also protects the bride and her family from the evil eye. Science believes that Kajal cools down the eyes. Moreover, it protects one from the harmful rays of the Sun and dust and dirt.

Solah Shringar is incomplete without the Mehendi. The bride along with the women attending a wedding is supposed to apply henna on their hands and feet. It is also believed the darker is the color of Mehendi of a bride’s hand, more loving her husband would be. The herbal and medicinal properties of Mehendi prevent the stress coming the bride’s way. Moreover, it provides coolness and its smell boosts up the energy.

In North India, generally during wedding bride is dawned up in a red-colored lehenga having zari or gota work. The yellow and red colored saree is preferred by brides of Eastern India. Science believes that the color red is the most powerful and effective. It increases concentration and brings stability and balance in life.

The Solah Shringhar is considered incomplete without the presence of aromatic gajra in the hair of women. In Southern India, women use the one made of Harsinghar flowers. The smell of chameli flowers is quite inviting and hence attracts everyone’s attention. Also, it keeps the stress away and spreads positivity in the environment.

The maang tika, along with the sindoor adds to the beauty of the brides. Newlywed generally beautify their forehead with it. Moreover, this jewelry is worn in the center as it guides a bride that she had to walk on the straight and right path after marriage and make all the crucial decisions without being partial. It regulates the normal body temperature in women. Hence, it enhances their wisdom and decision making power.

A belief states that it maintains the good health of a husband and brings prosperity. By piercing the nose, one feels acupuncture. Moreover, it prevents respiratory diseases and fights against them if you have one. Also, the silver or gold nath benefits the skin with their metallic properties.

Earrings are a crucial part of Solah Shringhars and women’s beauty items as well. As per the belief, it is a symbol that a bride will neither say nor listen to ill tings about her new family. It gives the acupressure benefits. Moreover, it helps in preventing mensuration or kidney-related problems.

This beautiful neck jewelry symbolizes the married life of a woman. The groom makes the bride wear it during the wedding. It ensures the longevity of the husband. Moreover, the mangal sutra is generally made of gold or silver. These metals are beneficial for skin and prevent various ailments.

It is similar to a bracelet but is worn on arms. A belief states that by wearing it, a woman welcomes the wealth and prosperity in her home and wards off the negativity. Scientific belief says that by putting pressure on appropriate points, it maintains regular blood flow in the body.

Since ancient ages, bangles hold a special significance in the life of a married woman. Hence, it is an important part of the Solah Shringhar. Science says the sound generated from the bangles makes the bones strong. Also, they are beneficial in maintaining regular blood flow.

It is an important jewel. A ring ceremony is also conducted before the wedding. The ring finger has a direct connection with the brain. Hence, it prevents stress and mental diseases.

This silver or gold piece of jewelry makes a woman look even more attractive. Also, she hangs the keys of the home in it hence depicting she is the owner of the home now.

It is a traditional jewel adorned on the fingers of the feet of a married woman. It is a tradition being followed since ages. The nerves of the feet have a direct connection with the womb. Hence wearing it during pregnancy gives relief during cramps and regulates blood pressure.

The melodious sound of this jewel fills the newly wed’s home with a positive and happy aura. Scientific research states silver anklet gives relief in the pains of the joints. Also, it’s sound wards off the negative vibes from home.

Also, you may like to read Spiritual oils and their benefits