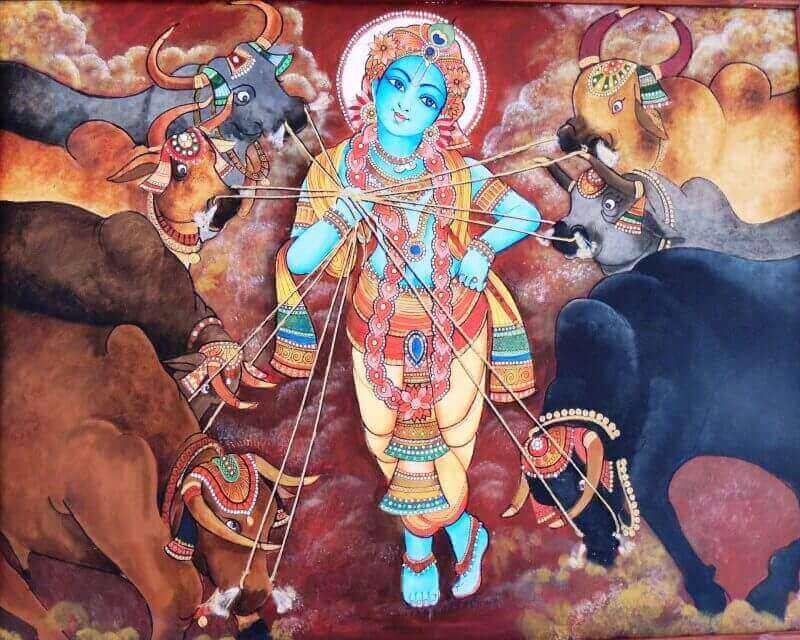 Sri Krishna Janmashtami or in simple words Gokulashtmi is a once a year festival that unites people across the country to come and indulge in colors & love. The actual celebration of Janmashtami takes place during the mid-night because Kanha was born on a stormy, dark night to end the rule of an evil king. Kanha was the 8thand complete Avatar of Lord Vishnu.

Sri Krishna had an undeniable role in Mahabharata. Also, he promulgated the theory of good karma and Bhakti in Bhagwat Geeta. In the contemporary era, theories have recognition of the supreme guide for human life.

Read ahead to know more about the birth of Kanha, history, and background of Janmashtami and celebration across the globe.

According to Indian mythology, Kanha has the designation of one of the most eminent entities. Every year, people celebrate Janmashtami with grand zeal and devotion.  In accordance with the Hindu calendar, this festival falls on the Krishna Paksha Ashtami. It is the 8th day in the month of Bhadon of the dark fortnight. The festival of Janmashtami comes in the month of July or August.

Sri Krishna was born in Mathura around 5,200 years ago. Devotees believe him to be the strongest form of human manifestation of the Lord Vishnu. In ancient days, the sole purpose behind the dawn of Sri Krishna was to free the Earth from the grasp of demons and immorality.

The Puranic text describes Sri Krishna as to the son of Devaki and Vasudeva. He was born in the custody of his maternal uncle Kansa who was the emperor of Vrishni(capital of Mathura). Kansa was a brutal king and in a prediction, it was stated that the child of his own sister Devaki would kill him and free the earth from his clutch.

Lord Kanha was born in the jail of Kansa. On the night of Sri Krishna’s birth, his father takes him to Gokul. There he exchanges baby Kanha with Adi Parashakti the daughter of Nanda and Yashoda from Gokul who was friends with Vasudeva.

– Young Kanha and his Mischievous Nature

Lord Krishna grew up in Gokul under the roof of Nanda and Yashoda. His childhood blossomed away from the violence of his uncle. His childhood was a paradise of cows and ecstasy. Lord Krishna has uncountable names among which Kanha is the most popular and loved. The next morning after Kanha’s birth, the folk of Gokul had their eyes open to see such a glorious baby boy. In no time little Krishna became a source of radiance and joy for the people.

Sri Krishna and his mischievous nature are the most vital of Hindu folklore. As time continues, baby Krishna turns out to be the naughtiest and the most loving child of entire Gokul. His stories of stealing Makhan (butter), stealing gopi’s clothes while they bath in the river and how every time mother Yashoda shields him are popular among everyone.

When Lord Krishna was an infant Kansa sends his evil demon Putana. After slaughtering many children across her way to Gokul she gets to know about miraculous boy Krishna.  She tries to poison little Krishna by feeding him poisonous milk. However, the infant god sucked the life out of her and killed her.

The incident of Kaliya Naga living in the Yamuna River is a case when people from Gokul notice a glimpse of the divinity of Sri Krishna. When little Krishna was playing with his friends their ball fell in the river where a hundred and ten-headed serpent lived with his family.

Krishna dives in the water to retrieve the ball and tells Kaliya to stop poisoning the river. When the serpent refuses out of hatred, Lord Krishna assumes the weight of the entire universe and dances on his head.

Therefore, the naga realizes that he is not overpowered by an ordinary boy from the village. Further, he begs for his apology and promises to never return.

Lord Krishna was born to free the people of Mathura from the evilness of King Kansa. When Krishna grew up to be compatible with fighting King Kansa, he finally killed him and freed people from his evilness.

Janmashtami is a festival that people celebrate across the globe in many different ways. On this day, all over India people chant devotional songs and dance. The grand pooja is held and arti is bestowed to Lord Krishna with candles and lamps.

This festival has a special significance in Mathura and Vrindavan because Lord Krishna spent most of the childhood in these two cities. On the night of Janmashtami, people decorate homes and temples with lights & lamps to welcome little Krishna.

There are many unique customs for celebrating Janmashtami.

Sri Krishna Janmashtami has a huge place in the hearts of the people of Bangladesh. The country celebrates this festival since the year 1902. A national holiday is observed in Bangladesh for Janmashtami because it is a special festival for the people living there.

In Fiji, the festival is known as Krishna Ashtami. People don’t have a holiday, though. People collect in the temples and celebrate the festival by singing devotional songs. They also distribute offering (prasad) after the devotion.

These were some details about the magnificent journey of life Lord Krishna. He is the symbol of splendor and a person may find the glory of Kanha is in everything of this universe. After all, the beauty lies within the eyes of a person.

These were some major information about the festival of Janmashtami. You may also like to read about- Mythological Tales behind Rakshabandhan.

Consult the best Astrologer of India now and learn about Indian festivals, customs. Also, connect with AstroTalk for Online Pooja and muhurat.

Remedies to Please 9 Planets To Get Rid of Problems
Views: 25485