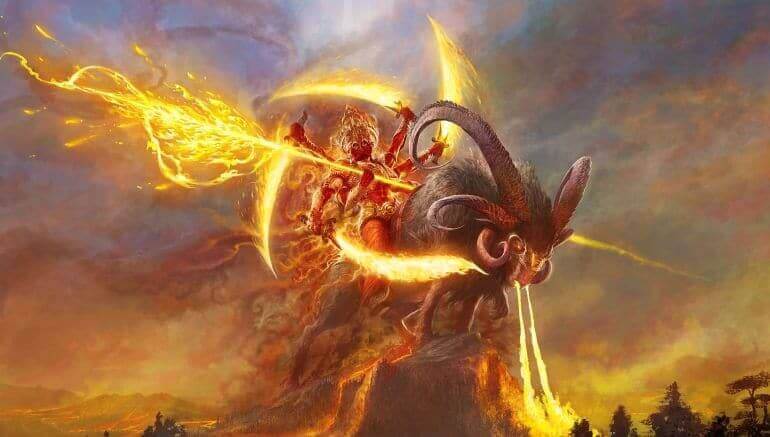 Have you ever wondered about the mythological creatures who are believed to have existed in Hindu mythology? Animals with parts of other animals, or humans with part of animals or many more.

With superpowers such as their bodies made of ice, fire, and flames or a human with the lower part of a fish. Or creature who can change its appearance freely and feed on human energies, a thousand-headed snake.  Wanna know more? Keep reading for 11 of the mythological creatures according to Hinduism.

A Makara is an oceanic legendary mythological animal. It is a creature with the body of a fish, the trunk of an elephant, the feet of a lion, the eyes of a monkey, the ears of a pig, and the tail of a peacock.

Makara is the Vahana of Goddess Ganga and ocean God Varuna. It is the emblem of the affection of God Kamadeva. Makara is the visionary indication of Capricorn, one of the 12 images of the zodiac.

The Rainbow Fish is an amazing animal in Hinduism as enormous as a whale which ate Vishnu’s manifestation. Or buddha who expelled experiencing the world.

When the rainbow fish was caught, it gave the country nourishment for an entire year. Its red scales were made of flames, blue of ice, green of grass and yellow of lightning.

In the Hindu epic Mahabharata, Navagunjara is an animal made of nine distinct creatures. The creature is a typical theme in the Pata-Chitra style of painting, from the Indian province of Odisha. Also, the variant of the Mahabharata, composed by Oriya artist Sarala Dasa, portrays the legend of Navagunjara.

Navagunjara has the leader of a chicken and stands on three feet –  of elephant, tiger, deer, the fourth appendage being a raised human arm conveying a lotus or a wheel.

The mammoth has the neck of a peacock, the back of a bull, the midsection of a lion, and the tail of a snake.

Sharabha is an animal in Hindu folklore that is a part lion and part flying creature. As indicated by Sanskrit writing, Sharabha is an eight-legged brute, mightier than a lion and elephant and which can murder the lion.

Shaiva sacred texts portray that god Shiva accepted the symbol (manifestation) of Sharabha to tame Narasimha – the wild man-lion symbol of Vishnu. In Buddhism, Sharabha shows up as a past birth of the Buddha.

The Yaksha is a class of nature-spirits who oversee characteristic fortunes covered up in the earth and tree roots. They show up in Hindu, Jain and Buddhist writing.

The female type of the word is Yakshini. The yaksha has a double character. From one perspective, a yaksha might be an innocuous nature-pixie, related with woods and mountains; yet there is additionally a darker rendition of the yaksha, which is a sort of phantom that frequents the wild and waylays and eats up explorers.

Hindu sacred writings give differing records of the introduction of Kamadhenu. While some portray that she rose up out of the stirring of the grandiose sea, others depict her as the little girl of the maker god Daksha, and as the spouse of the sage Kashyapa.

Different sacred writings portray that Kamadhenu was in the ownership of either Jamadagni or Vashista (both old sages). Also that the lords who attempted to take her from the sage confronted critical ramifications for their activities.

Aditi is the wellspring of all wonders in Indian folklore. She guarantees to give a perpetual supply of milk to all people relying on the prerequisite that people carry on as her calve and approach her with deference as hurting her would hurt the Earth itself.

Furthermore, the name Aditi signifies ‘Boundless’. In the Vedas, Aditi is the mother of the divine beings.

As the heavenly mother of each current structure and being, the union of all things, she is related to space (akasha) and with spiritualist discourse. She might be viewed as ladylike Brahma and is related to the base substance in Vedanta.

Among many mythological creatures, Pishachas are tissue eating evil presences as per Hindu folklore. As a matter of fact, their roots are dark although they are believed to be made by Brahma. Also, another legend portrays them as the children of either Krodha (outrage) or of Daksha’s girl Pisaca.

Pichachas have the ability to accept various structures freely, and may likewise wind up undetectable. They feed on human energies.

Now and then, they have people and change their musings, and the exploited people are beset with an assortment of diseases and irregularities like madness. Certain mantras should fix such distressed people, and head out the Pishacha.

A transmission of god Shiva, Pashupati lives in the backwoods and the forests and protects crowded creatures.

He was the person who brought expressions like music, plays, move and painting to people. He appears as any creature. Pashupati is the master of the backwoods spirits, the Vidyesvaras.

The thousand-headed snake in Indian folklore, Shesha Naag, is also called Ananta. When it curls forward, creation happens, when he loops in reverse, the universe stops to exist. Further, he was given the name ‘Shesha’ which means leftover as only he and no one else remains.

Prior to Balarama, Laxman, the sibling of Rama, was likewise a manifestation of Shesha Naag It utilizes seven of its heads as a bed for Vishnu. He is the first of the Naga lords and lived in Thiruvananthapuram.

In point of facts, Matsya is one of the mythological creatures that are a symbol of Vishnu as a fish. The Matsya is believed to be a monster fish similar to a human with a human middle and the back of a fish.

It cautions Manu, the primary man about the approaching calamitous flood and requests him to gather every one of the grains and every single living animal of the world in a pontoon.

At the point when the flood crushes the world, Manu – in certain renditions joined by the seven extraordinary sages – makes due by boarding the ark, which Matsya destroys to security. In addition, the story is in the custom of the group of flood legends, basic crosswise over cultures.

You’ve got it all covered! 11 of the many Hindu mythological creatures!

For more, you can discover what mythological creature are you according to your zodiac sign.

Consult the best Astrologer of India now and discover the hidden meanings of your life events. Connect here Now.