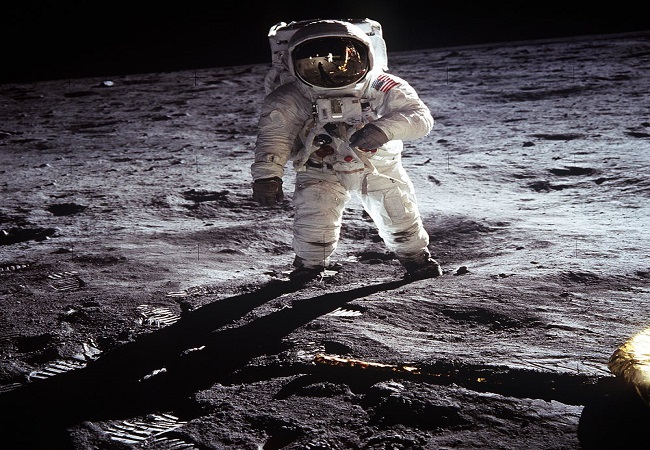 The space program was carried out by National Aeronautics and Space Administration (NASA). Apollo mission’s purpose was to lift from the Earth, land on the moon and bring back humans back safely to the earth.

Apollo 11 was the first space mission and the crucial period for everyone when humans first landed on the moon. Back on July 20, 1969, Neil Armstrong took his first stepson moon, alongside Buzz Aldrin. Both of them took samples from the lunar surface.

The spacecraft was launched 13:32:00 UT on July 16, 1969, from Cape Kennedy. High-technological instruments were placed in the spacecraft. The enabled the astronomers and researchers in capturing the moon’s images from different angles and measurements.

Armstrong and Aldrin both took lift off as an option immediately after landing on the lunar surface. After which they had their meal. For exploring the lunar surface more, the astronauts even postponed their sleep hours.

Within its time period, astronauts were able to collect larger samples of the lunar soil. In addition, they also collected panoramic photographs around the spacecraft’s landing site. They also took closer photographs of the lunar surface material.

Both the astronauts explored the lunar surface for around 2.5 hours. After the scientific methods and experiments were conducted satisfactorily, samples were collected and instruments were deployed. The astronauts then planned off to sleep for a while.

With its checklist, the Apollo spacecraft provided the astronauts with self-sufficient space to work and also a great level of transportation. The checklist also includes food, protection, work equipment, clothing, bathroom and the list goes on!

After its success, National Research and Space Administration conducted five more mission. The space missions were conducted between a time span of 1969-1972.

Apollo 12 was the second man-made moon mission which experienced Charles Conrad and Alan Bean. Both landed on the lunar surface on November 19, 1969.  Within time, a span of 31 hours and 31 minutes, they took several samples of the lunar soil.

The spacecraft landed near Surveyor 3. Surveyor 3 was an unmanned spacecraft which landed on the moon’s surface 2.5 years earlier than Apollo 11 landed.  Astronauts in charge also took along several parts of Surveyor 3 for further research.

The third lunar space program took place on February 5, 1971. The spacecraft was crewed by Commander Aland Shepard and pilot Edgar Mitchell. They spent 33 hours and 31 minutes studying the lunar surface.

Likewise, they also collected various moon samples, conducted distinct experiments and took photographs. Apollo 14 also turned out to be the first mission where the spacecraft landed on the moon highlands.

Fourth moon mission took place on July 30, 1971. Commander David Scott and pilot James Irvin headed the spacecraft. For the first time, everyone saw usage of the lunar rover on the moon’s surface enabling the astronauts with covering a larger area.

Alfred Worden, as the pilot took off the aircraft after successfully spending 66 hours and 55 minutes on the moon.

On April 21, 1972, Thomas Mattingly landed the aircraft on the moon. With the landing on Descartes area, north of the Dollond crater, NASA had its fifth-lunar landing.

Apollo 17 took launched its spacecraft on December 11, 1972. The mission became the last manned lunar mission.  Ronald Evans landed the spacecraft in the valley of Taurus Littrow, close to the south-eastern edge of the Mare Serenitatis crater.

The next manned moon mission-

After 45 long years, US President Donald Trump is planning for the next manned lunar mission.  The mission is named as “Artemis,” after the Greek goddess. NASA has been developing two rockets to send to the moon.

Earlier both the rockets were scheduled to launch by 2017. Due to the delays, they will be launched in 2020. The next set of moon mission launch will take place in 2024.

Earlier these missions were only headed by the white man. Only 12 men have experienced putting up their foot on the moon’s surface. This mission will provide us with First two female moonwalkers, in the history of moon missions.

The mission will also give a soft bow to gender equality. Alongside the funds needed for the mission to carry forward. This time special spacesuits will be designed for the astronauts.

NASA is also planning to launch an unmanned vehicle to the moon by 2024. The launch will take place before any other human lands on its surface. NASA will be bidding in the private sector for the development of the unmanned vehicle.

You might also like to read about Two Earth Size planets found near the Teegarden Star to know more about the exoplanets.