Brooklyn Nine-Nine- Which Character Are You? 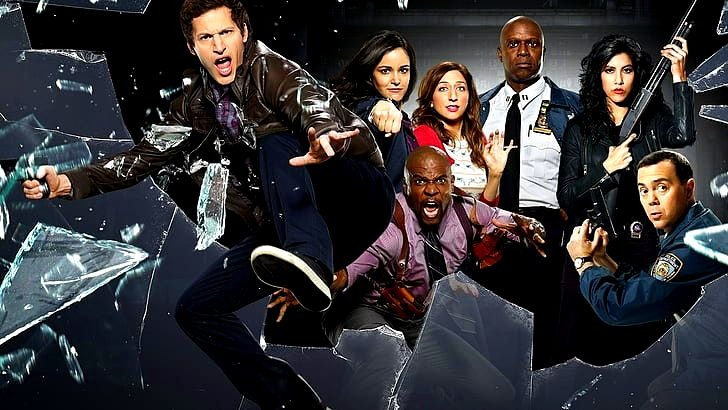 You shouldn’t be here if you cannot hear the Brooklyn Nine-Nine theme music already. Also, if you can’t YA BORING.

The sole purpose of the sentence above is to make sure one classic Nine-Nine fan find this piece interesting. The first episode of the show went on air on 17th September 2013. Ever since it has a tremendous fanbase for so many reasons. It shows how weirdly beautiful people can be, how colleagues can be your extended family, and how you catch the bad guys and look good doing it. But most importantly, it is one of the most entertaining and hilarious shows today. Comedy is one of the toughest Genre to write. TBH the writers of this show have aced the genre without the use of cheap sexual jokes and misogyny.

Imagination is the prime deal of fiction. However, all the fictional characters are formulated after the hint of an actual person. Thus, in many ways, we find a strange connection with them. For their quick wit or tender heart, many of us can relate to Brooklyn Nine-Nine characters. So, let’s see who we get on the basis of the zodiac sign.

He protects and he attack. But most importantly Pimento gave Charles his money back. Hot-headed, determined, and cry baby Adrian Pimento.

Pimento might be an unstable and rebellious detective but there is no doubt to the fact that he is a great one. When the precinct needed him, he went undercover for a long time. To completely let go of selfishness and cross any boundary for the sake of duty is a trait of an Aries. Aries the fiery Rams are clever, brave, independent, and very loving. You give them a drop of love and they return it with an ocean.

All the weird, unpredictable, and storming actions of Pimento makes him a perfect Aries.

Open some windows, here come the sensuous of all, Sophia Perez aka a true Taurus.

Sophia Perez, a defense attorney, and Brooklyn Nine-Nine’s frienemy. Under the rule of Venus, the planet of beauty, she a blessed goddess of cuteness and hotness. Above this, she is super smart. In a room full of detectives, she can out-smart each one of them with a snap of a finger. That’s Taureans for you. They enter the room and you are bound to take a second look. They are sweet and tender. On the other hand, Taureans can be diplomatic and heartless.

Didn’t we all get angry when Sophia broke up with Jake? Though, we prayed for it so badly. Taurus can be very predictable and yet you can never resist their charm.

Equally lazy and unintentionally funny, Scully and Hitchcock. You do anything but you dare lie to them about food and not invite them for a food contest. (This is the version of Scully and Hitchcock from their old age). However, this comparison is based on how they were in a young time.

Long before Peralta, it was Scully and Hitchcock who made grand entrances and super cool punch lines in Nine-Nine. Witty, smart, good-looking Detectives with a lot of chasing villains. They come sharp with the team and Niner’s can trust them with anything (except food). Just like any Gemini, they are generous, cool, and giggly. You might not find their emotions everywhere but when you need them, they will be there.

Charles Boyle, the workhorse of the Brooklyn Nine-Nine. He also the heart of Nine-Nine. Charles is cranky, lame, and still an astute cop. And yeah he is the only best friend Jake can ever have. Period. Charles doesn’t share Jake.

Like any classic Cancer, Charles Boyle is the sweetheart of the Brooklyn Nine-Nine precinct. The best thing about him is you can never really guess what he might speak next and whether it will make you proud or push in embarrassment. However, Charles would say it anyway. Charles almost idolizes Jake and is ready to do anything for him. He believes in respect and craves love. For him, friends and family are his entire world.

Charles feels everything so deeply and like a freaking Cancerian, you can find his emotions all over the place. From clumsy Boyle to keen partner for solving crimes, he can kill it with you ALL NIGHT LONG.

How can someone be this brilliant, funny, sarcastic, cool, tender, puerile, and emotional altogether? And yeah also Charle’s Best Friend.

Jake Peralta is all of them. He can solve the toughest puzzle of all and yet forget not to sing “I want it that way” in front of a victim’s sister. There should not be a question of why Peralta is a Leo. With the Sun on their side, Leos are the most eccentric people one can encounter. They love to lead the pack and under no circumstances can they share their limelight. Similarly, Jake is someone who loves being the center of attention. Though, like every Leo, he deserves it. He is wise and caring. He loves his girl and his friends.

With a blend of humor and intelligence, they are irresistible. And every time he is on the screen, he will make you laugh and sometimes even cry. And that’s a Peralta Guarantee.

Under Mercury, the planet of wisdom, Virgos are the most compassionate individual you can have around. They are often the best people you may know. At first, you might find them weird, with the time you understand it is impossible to not love them. Also, they are perfectionists. So, they make sure you keep loving them.

It doesn’t always happen that a female character of a show that is not a supermodel goddess and still girls are crazy to be like her. Yes, that’s Amy Santiago for you. She obeys rules, follows orders, respects everyone, and dress-up properly every day in order to be a PERFECTIONIST at her job. People call her nerdy, obsessive. Yet, she comes out as a bold cop who can kick your ass even in her wedding gown. From her witty-intellect to her beautiful relationship with Jake, she keeps you on her side.

Ps. Only a Virgo can be so perfect to have a favorite font.

Agree or not she is the center of harmony in the Nine-Nine precinct. With sarcasm or harsh truth in jingles, she keeps the precinct right.

Librans are the sign of balance, love, gentleness, and good thoughts. They keep a tight hold on the updated world. They are smart, generous, influencing. Notwithstanding Gina can be really bizarre sometimes. Be that as it may, you cannot stop yourself from finding her fascinating. She the one that maintains the groove at the Brooklyn Nine-Nine. She is an advisor of Captain Holt who makes sure the precinct never loses its charm.

Rarely you find a Libran with such an open behavior. She is someone who can convince you into doing anything. As far as Astrology goes, only Librans can influence your thoughts.

After all, Gina Linetti is more of a state of mind. Right?

She is the Scorpion of the Brooklyn Nine-Nine. With the planet of valor, Mars by their side, Scorpios love the intensity of everything. They fear nothing. Rosa Diaz is the tough guy and badass woman. She is someone that you wouldn’t wanna mess with. Identical to a typical Scorpio, she secretive enough to even change her house once her friends visit there. Even her closest friend Jake knows only 3 facts about her.

Diaz defines true friendship. Regardless of the situation, she will stick by your side. Well, she also defines a true revengeful tactic. You hurt her once and she’ll sting you twice. Thus, people are terrified of her. Not Hitchcock and Scully. They were brave enough to steal her ice-cream.

We have to admit, Judy is not just a Bandit, he is an artist. Similar to the Sagittarian traits, he seeks adventure. Dough Judy is a very-very lucky nomad con-artist. He comes as an arch-enemy of Peralta and in meantime becomes friends with him.

Judy is a Sagittarius with an everlasting hunger for experience. He holds the least chance to act mature. And yet, you can never ignore him. Judy with a huge crush on Rosa and pop culture and laid back attitudes makes everybody react like “ARE YOU EVEN SERIOUS?”. That’s a crazy model of Sagittarian.

He always gets fluky to make an escape. All in all, we all enjoy the Peralta-Judy duo and how Peralta goes crazy every time he is around.

In the shelter of Karmic planet Saturn, Capricorns are workaholics and traditional people. They are practical, wise, just, and disciplined. They are someone you can find sitting behind their desk on a fine Saturday evening without a hangout plan.

These are the most silent and well-mannered people you can ever meet. They ace their work and are the best an organization can appoint. Captain Raymond Holt is a complete Capricorn goat. Just as classic Cap goat, he believes in moving forward and moving upward in life. On the inside, he seeks fun and high-level humor. However, only her mentee and fan Amy Santiago. Ray Holt makes people have faith in goodness and helps them grow.

He mentors the precinct like no one else and keeps them correct. Along with this, he is great at hiding his vulnerable side. Still, his team knows the best of him.

The independent, humanitarian, bookworms of all the zodiac, Aquarians match perfectly with Kevin Cozner. They are the person you may find very snobby at the beginning. However, their undying urge to know more and more will make you find them interesting.

In reality, Kevin is as eccentric as his husband Ray Holt. He is free-spirited and extremely kind. He has the most uncommon hobbies and offbeat fashion sensibilities. However, just as his sign, he is a humanitarian. Kevin is extremely supportive of Holt and in every up & down he stands with him strongly. Not to forget, Kevin comes in a real curt tactic towards Ray’s team. However, in no, he leaves his guards down and shower love at them & especially at Jake.

Oh, Terry, why do you love so much? Well, you have to, you are a Piscean. With the fortune planet as Jupiter, their sign lord Pisces are both lucky and phenomenal.

In front of Terry, we are SO SMALL. He is the Mr. Noice of the Brooklyn Nine-Nine precinct. He showers his love on one and all unconditionally. An ideal man, father, husband, friend, and Sargent. His team can trust him blindly with anything. Pisces is the twelfth zodiac sign. Thus, they comprise all eleven signs. Whether it is beating up the bad guys or braiding hair of his little girls or getting obsessive over a new flavor of yogurt, Terry can do it all.

Pisceans have one thing in their life that they love unconditionally. AND TERRY LOVES YOGURT.

These were Brooklyn Nine-Nine characters based on zodiac signs.

Further, you may find interesting reading about Zodiac Signs as Money Heist Character