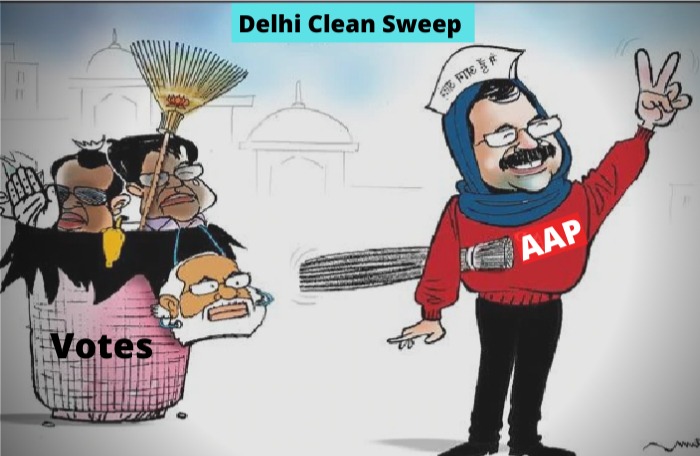 Finally, the battle of Delhi Assembly elections 2020 has ended and its Aam Aadmi Party (AAP) has shattered the hopes of confused Bharatiya Janta Party (BJP) with a clean sweep over Delhi. For BJP its the end of their winning streak as they failed to impress the public. You can say their success Mantra turned against them which became a major cause for their defeat.

The charisma of Narendra Modi & Amit Shah failed to counter the approach of underdog IIT Kharagpur graduate “Arvind Kejriwal”. He singlehandedly demolished the ego of BJP by winning Delhi with a huge majority of votes.

As per the final tally, AAP won 63 out of the 70 seats. On the other, BJP won only 7 seats despite running huge campaigns and with the great name of Narendra Modi. Congress and other parties didn’t win a single seat which was already expected to some extent.

What went wrong for BJP? Why this election proved one-sided for AAP? In this article, I am going to about the main reasons why BJP lost to AAP.

On January 10, PM Modiji started BJP’s election campaign from Delhi’s Ramlila Maidan including several MPs and Ministers. The campaign was basically a public meeting to promote BJP but surprisingly it became a rally to target Arvid Kejriwal and his party.

BJP leaders even called Kejriwal “Anarchist” and also said that he should join “Naxals“. Many advertisements and published cartoons were also launched to degrade Arvind Kejriwal and his party. Unfortunately, this plan failed miserably and it backfired on the Bjp itself.

Kejriwal in his rallies reminded Delhi citizens of these allegations against him. He even said “The prime minister launched an attack on me in a rally, saying I am a Naxal. Am I a Naxal? Do I need to go to the jungle? Does this kind of language suit him?” This negative campaign led by BJP became one of the major reasons why BJP failed in Delhi.

Personally, until the time of elections, I didn’t know that Manoj Tiwari is the main candidate representing BJP in Delhi elections. In any election, the party wants the CM candidate on upfront which was clearly not seen in the case of Manoj Tiwari. It seemed more like Modiji vs Kejriwal rather than Kejriwal vs Manoj Tiwari.

After the failure of Kiran Bedi in the 2015 elections, it seemed that BJP was much confused to announce their CM candidate to stand against Kejriwal. Therefore, Manoj Tiwari was completely the wrong choice which can also be considered as the main reasons for BJP’s drawback and their miserable failure in Delhi Elections 2020.

After the implementation of NRC and CAA, BJP completely lost it among the Muslims of Delhi. CAA spread like a fire all over India, especially among the Muslim community. It already gave a hint that “It’s not the time for BJP in Delhi“. Instead of cooling down the situation, BJP focused more on their election campaign that never worked in their favor.

The chain of protests in Shaheen Bagh and the incidents of Jamia Millia already gave strong points that BJP is not going to form Government in Delhi. If you are introducing a new law in the country implement it for the entire nation. Moreover, not for a particular section of the community.

Kejriwal Stood As The Strong Leader

Agree to it or not but the underdog called “Arvind Kejriwal” took the whole Delhi by storm. The strongest leader against which BJP even failed to represent a strong face to compete against him. BJP focused more on targetting him, to bring him down rather than working for the welfare of the people. You can also say BJP made him the center of attraction and rather degrading his image, they made him the Star of Delhi.

Kejriwal worked for the people, he realized the importance of public interest and in the end public gave him votes with the open heart and made the CM of Delhi once again. In Delhi polls, Kejriwal proved that it’s not important to indulge in negative campaigns to win the hearts of the people. Do what people want and say what people want to hear!!

Disputes Within The Party

After the 2015 elections, BJP never united, the disputes within the party continued. As a result, Delhi slipped from the hands of BJP and that too with a huge majority. The introduction of the new faces gave a spark to agitation within the party which proved even worse for the already weakened BJP. The protest of party workers outside the Delhi unit office and the conflicts between the new and senior officials badly destroyed the image of BJP.

The party workers were not actively participating in the election campaigns that left a negative impact on the minds of the voters. It looked like there are two parties competing within a single party. The division of party workers, conflicts, negative campaigns, all these things eliminated BJP from the race to win Delhi elections 2020.

Also, you may like to read about: Valentine’s Day: The Ultimate Zodiac Rule Book