Ganges: A sacred and purest river of all 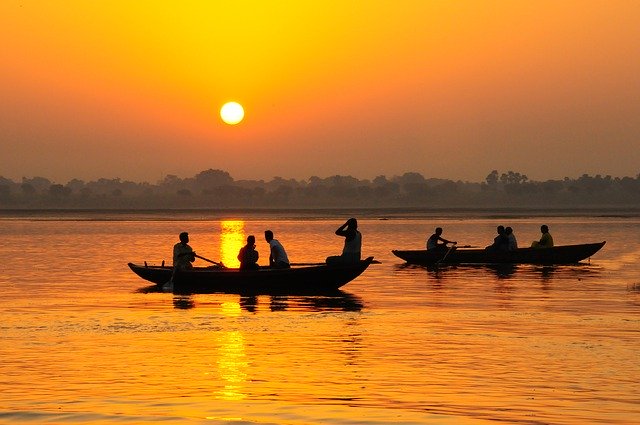 The sacred and the purest of all, the river Ganges is where life originates and even comes to an end. From more than a thousand years, the mother Ganga is accepting all Her children in Her laps and wading away all our sins. Acquiring special importance in all the Vedas and Puranas, the cold waters of river Ganga is blessed. This is the reason that not only the Indians but also the tourists come to take a bath in this river. Continue reading further to know all about our mother, Mother Ganga

As per Hindu Mythology, it was Lord Vishnu who originated the river Ganges. It happened in His incarnation as a dwarf Brahmin when He took two steps to cross the world. People say that in His second step, He accidentally created a small hole in the universe’s wall. After this incident, some water of the river Mandakini spilled out. And, the river Ganga started flowing in the heavens. Lord Vishnu permitted the Ganges river to descend towards the earth for one of his devotees, Bhagiratha.

However, another problem that emerged was that if the holy river immediately falls on Earth then it could lead to destruction everywhere. This time, Lord Shiva came for the rescue. He gently lowered the Goddess in His hairs slowly. And, in this way and it took about a thousand years for the Ganga to descend to the Earth. Since then, mother Ganga is warding off the sins of the people and purifying them.

The physical origins of Ganges

The Ganges in the Art

Often addressed as Mother Ganga, The goddess is depicted in Hindu art dressed up in a white saree and riding on the crocodile. There are many temples of mother Ganga in the Holy city if Haridwar and Varanasi. In her humanly form, The Goddess Ganga is seen along with Her sister-Yamuna.

Significance of the Ganges in Hindu Mythology

The Ganges is often associated with the Trimurti Or the three Gods- Lord Brahma, Lord Vishnu, and Lord Shiva. Lord Brahma use to keep the water of this holy river in His Kamandal and used it for the creation of the universe. Lord Vishnu washed His divine feet in this river during the Trivikrama Avtar. You might have surely looked at Lord Shiva’s idol, at least once in a life. The river Ganga is flowing from His long black hair.

Apart from this, even Lord Krishna mentioned, “I am peepal among all trees, Shark among all fishes and Ganga among all the rivers”. The river Ganga contains miraculous and extraordinary powers. The Ganges water holds the power to cleanse all the sins of an individual who even takes a dip in it. A tale also describes Ganga as the sister of Mother Parvati and the Consort of Lord Shiva. Moreover, the various Puranas describe Her as the mother of Bhishma. In addition, this sacred river is highly significant in the epic Mahabharata as well.

The significance of Ganga Jal in Pujas

The holy waters of the river Ganges are inseparable from the traditional pujas as well. The water of the cosmic river Ganga has numerous potentials to ward off all the evils of a person in the Kaliyug. A dip in this sacred river is alone sufficient in removing the sins of many births. In addition, the water also has germicidal properties and creates a positive arena. Hence, Ganga Jal is ideal water for Pujas

Also, you may like to read Things that bring negativity at home