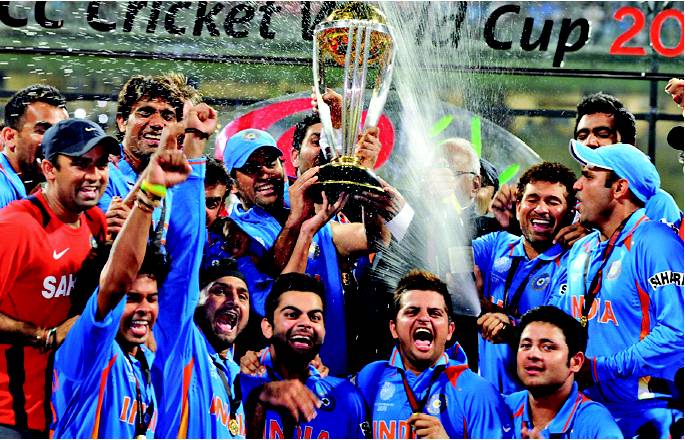 Time has come for the much-awaited moment where countries can eventually dream of having this 60 centimeters high World Cup 2019 trophy.

Cricket World Cup is the much-awaited tournament of the year. ICC termed it under‘the flagship event of the international cricket calendar’.

The first three world cups were held in England. The tournament’s hosting took unofficial rotation rounds having 14 members from ICC department hosting at least one match in the overall tournament.

Highest ranking teams automatically receive qualification since the World Cup is open to all members of the International cricket council.

The tournament comprises of two stages, i.e., group stage and the knock out stage. In the group stage, four teams in each group, competing with each other and the top two teams from each group entering into the semi-finals.

Winners of the semi-final play against each other and the winning team are the ultimate winner of the ICC World Cup.

There was a major shift in the original format of the ICC tournament in the years 1999-2003. The participating teams made a split into two pools and the final three teams making it to the Super 6. Whereas, in the 2007 World Cup event followed a certain format included 16 teams dispensed into four gatherings of four.

In the later years between 2011 and 2015, highlighting two gatherings of seven team, each playing in a round-robin format. In this tournament, the top four teams proceeding to the knockout stage from each group.

There was a major drop in the number of teams participating in the 2019 World Cup. Game Changing moments in the History of Cricket World Cup-

Game changing moments in the history of Cricket World Cup-

Back in 1992, in Pakistan VS New Zealand semi-final, 123 runs in 15 overs were needed by Pakistan. Instead of Wasim Akram, Imran Khan sent Inzamam-ul-Haq, who was less experienced. Still, the team was able to make its way to the semi-finals.

India’s first cricket match was against Australia in 1987. There they competed with an Australian player having less experience. The Indian team was on a good pace until Craig Mc Dermott stepped in and flipped the game triggering Navjot Singh Sidhu.

Having Australia, Zimbabwe and Sri Lanka on the competitor side only worsened India’s chances of winning the world cup. India’s win not only changed the position of the country in the ICC World Cup charts but also gave it a one day cricket a decent boost.

In 2011 ICC Cricket World Cup, India won against Sri Lanka by 6 wickets. India came into the spotlight and became pre-tournaments favorites in the media. The tournament was held in Wankhede Stadium, Mumbai where India played against Sri Lanka.

Among all the teams, Indian team is said to have the strongest spot on the batting side having veteran Sachin Tendulkar and Virender Sehwag.

Till now Men in Blue have won two ICC Cricket World Cup tournaments where India gave a tough competition to Australia and South Africa teams. New Zealand also turned out to be unbeatable this time.

Shikhar Dhawan injury turns out to be a major challenge for India since the Indian team has to bring a strong opening batsman in the picture. Rishabh Pant is all geared up to take Shikhar Dhawan place in the tournament in Manchester. Let’s see who will ICC Cricket World Cup 2019.