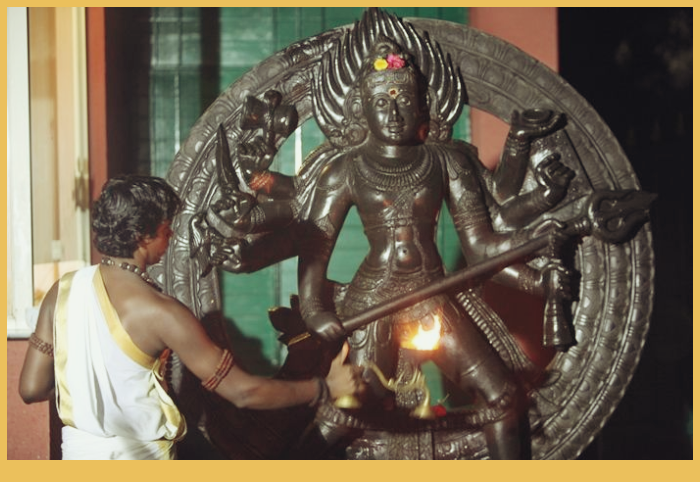 Kalbhairav Ashtami, a special day for the Hindus, the night we spend in order to remember the difficulties undergone by the fiercest form of Lord Shiva.

Lord Shiva has never failed to teach the three worlds about the deeds one must do and avoid. Citing examples is a common method to inscribe the ideology in our mind. Hence, Lord Shiva, the greatest master, took the task in his hands. Difficulties undergone by the dearest person have great impact on our life.

What if the great Mahadev himself underwent such tortures in one of his births, just to show us the right path? Everyone believes that the rules put by the souls in human form have its roots pointing to gods.

Even though they reside above, they never fail to point the righteous direction in our life. So, let’s all learn from the great guru ‘Neelkanth’ once again!

ord Shiva has never failed to teach the three worlds about the deeds one must do and avoid. Citing examples is a common method to inscribe the ideology in our mind.

Hence, Lord Shiva, the greatest master, took the task in his hands. Difficulties undergone by the dearest person have great impact on our life. What if the great Mahadev himself underwent such tortures in one of his births, just to show us the right path?

Everyone believes that the rules put by the souls in human form have its roots pointing to gods. Even though they reside above, they never fail to point the righteous direction in our life. So, let’s all learn from the great guru ‘Neelkanth’ once again!

The superiority of the ‘Trimoorthy

All starts from chaos, so where the great tale’s start too. Superiority is always a debate one has to avoid, as that could break the togetherness. The gods above were in a serious discussion of the superiority among the ‘Trimoorthy’.

The debate between Lord Brahma and Lord Vishnu was so intense, as a result of which a test was called out. The test had an objective of seeing Mahadev’s identities. True to himself, Lord Vishnu admitted not seeing Shiva’s head.

However, Lord Brahma lied of seeing Shiva ‘Linga’. According to the legend, Kalabhairav was a form of Lord Shiva, whom he created by his third eye due to his wrath. Legends also say that Lord Brahma insulted Lord Shiva during the chaos.

The tale of the fiercest ‘Kalabhairav’

The fiercest Kalabhairav also said to be the guardian of Shiva’s palace, stepped and chopped one of Lord Brahma’s head. This act of Kalabhairav’s ‘rudram’ was considered as Brahmahatya or the sin of killing the Brahmin of the highest degree. As the lifeless head of Lord Brahma fell down, he got furious and by which he cursed Kalabhairav.

Curse as punishment was to wander in the three worlds as a naked beggar with the lifeless skull as begging plate. Lord Brahma was in so much frustration that he ordered Kalabhairav to have a dog as his companion. This was done so that he could bring the reputation of Kalabhairav down.

As Kalabhairav wandered, he received the ‘manorath’, by which he could get all he wishes for, from goddess Lakshmi in Vishnulok. Since fate cannot be deceived, came the Mahadev to Boolok.

The transformation of the Agora

As Kalabhairav wandered in the earth or ‘Boolok’ as a naked beggar, he was humiliated and tortured. It is a belief till date that he fed on humans, as an ‘Agora’. After travelling so far, he reached Kashi.

However, the oegrass ‘Brahmahatya’ created by him using manorath reached before him in Kashi. It could not enter Kashi due to Shiva’s powers, and went to the other world ‘patalok’.

As Kalabhairav entered Kashi, he fell down, and his soul liberated from his body. It was certain that he received all the punishments for his sins.

The true power of Klabhairav

Nature provides us rebirths only if we are sinners. The sins that might subside now and leave us free from all earthly pleasures, is possible by praying to the Kalabhairav.

Kalabhairav devotees have no fear of death and are noted to have the will to face difficulties. Usually, dogs are valued as they are thought to be an incarnation of the Kalabhairav himself.

A boon ‘Avvaiyar’ got through sacrifice is possible just by a prayer-‘The last birth to the soul’.

The uniqueness of the Kalabhairav Ashtami

Kalabhairav Ashtami also called as ‘Theipirai Ashtami’ in Tamil falls in the month of November or December. It is celebrated on the eighth day (Ashtami) of the fifteen days of full-moon to new moon (Theipirai).

In the North, it is called Kalastami. It is a belief that this day is capable of lightening all our worries by just a prayer. If this auspicious day falls on either a Sunday or a Tuesday, then it is the most blissful day for Hindus.

As these days are the most favorite days of the Kalbhairav himself, it is deemed to be special. Kalabhairav said to have ‘Maa Kaali‘ as his half leads us to the right path.

Rituals in temples on Kalbhairav Ashtami

On this very auspicious Kalbhairav Ashtami, people pray in Kalbhairav temples. Chanting prayers, blowing horns and offering sweets make this day special. Dogs are fed with milk and some of the offerings made to the Kalabhairav are given to the dogs.

It is a belief that Kalabhairav himself had eaten all our offerings and had accepted all our prayers. Kalabhairav and the dog are adorned with flowers. Moreover, milk is poured over the idols as the devotees take their chances to thank the god.

In Varanasi, the face of Kalabhairav is made on gold or silver plate and is immersed in a brass pot containing water. All scriptural prayers are made for the ‘Mahadev’, in the temple built in Kashi, the place where Kalabhairav got free from his sins. The pandits who perform the rituals are later provided with gifts.

Kalabhairav is believed to have all 12 zodiac signs and 27 stars within him. His idol is adorned with a chain made of skulls and lemons. It is usually perceived that Kalabhairav is sitting over the dog.

On the puja day, the clothing over the idol is stripped. The ‘Avathar’ that Lord Shiva had taken to get rid of his sins is reminded to all the devotees.

Lord Shiva’s avatar has always a purpose to solve. Hence, let’s go learn what he had taught in his birthplace-Nepal. for the unforgettable tale of the Mahadev.﻿

The bliss of devotees on Kalbhairav Ashtami:

The day commemorated for the sufferings undergone by Kalabhairav, Kalabhairav Ashtami, is valued. It is said to have so much significance since it is believed that all our pains and worries would be sorted soon.

Devotion and prayers made by the devotees make them feel faithful of liberation. It gives a peace to stay away from all sorrows.

Devotion at home on Kalbhairav Ashtami:

Devotees, who want to pray to the Kalabhairav, yet cannot see his idol in the temple can pray at home. Here are the simplest ways to remind the Lord of your worries.

Performing fasting by avoiding meals (if possible), as thinking of the Kalabhairav would itself reduce your sins. While praying in your home, think of Kalabhairav and light the lamp in your home.

Chant the ‘Maha Mrityunjaya Mantra’ at least once and pray sincerely to the great Lord Kalabhairav.

These were the major details about Kalbhairava Ashtami. Also, you may like to read about the science of numbers- Numerology.