Kanwar Yatra 2019- Everything about the Grandiose March of Neelkanth Devotees 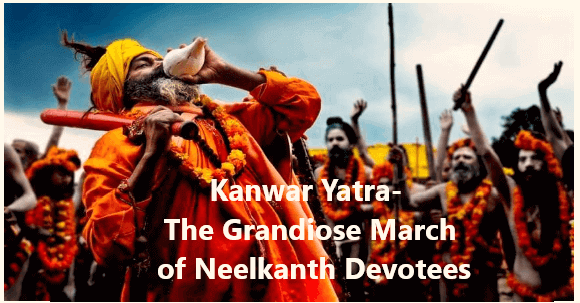 He is Adi and Ant. The world bows to Lord Shiva and he offers liberation, vigor, and inspiration.  The festival of Kanwar Yatra familiars one and all with the supreme deity & his preeminence

Devotion is a path of peace & fondness and Shiva devotees across the globe would do anything to display their gratitude to Neelkanth.

Every year, this holy Yatra observe a large number of devotees walking to fetch the water. The participants collect sacred water and walk to specific shrines of Lord Shiva in Augharnath Temple of Meerut and Kashi Vishwanath, Baidyanath, Deoghar of Jharkhand.

Meaning of Kanwar in the Yatra

As its base, Kanwar refers to a holy march carrying Bambooscales on the shoulder. This religious performance includes rituals in which devotees carry water from the river Ganga in a container on either side of the bamboo scale.

The wayfaring originates its name from the contraption known as Kanwar. This offering is dedicated to Lord Shiva from his devotees. Lord Shiva is also addressed as Bhole Baba which means, the one whois simple and impressionable. The person who carries the Kanwar is a Kanwariya and every Kanwariya who performs the pilgrimage of Kanwar Yatra screams the chant “Bol Bam” in a form to take the name of their God.

Appearance and Involvement of Kanwar Yatra

The Hindu religion has the blessing of Lord Shiva in the Shravan month. Shiva devotees around the world observe tough fasts in this holy month and perform pilgrimage journey.

In this month, the streets are indulged in Kesariya (saffron) color. Shiva devotees from every corner of the country travel in saffron shading to fetch Gangajal. The streets observe a large number of people in saffron shading singing devotional songs and screaming the name of Shiva. Their prime destination is the shrine of Shiva who is one of the Gods from the Holy Trinity.

The temple of Baidyanath is also known to people asBaba Baidyanath Dham. It is one Out of a total of 12 Jyotirling. The place draws its name from the mythological tales associated with Lord Shiva and King Ravana.

In accordance with the tales, Ravana is a huge Shiva devotee and he sacrifices his ten heads to Lord Shiva. Upon this, to cure his devotee, Lord Shiva comes and performs the part of a Vaidya (doctor). From this aspect of Lord Shiva, the temple gets its name Baba Baidyanath Dham.

The Splendor of Kanwar Yatra and Bol Bam

Bol Bam is the holy chant to astonish Lord Shiva. During the journey of Kanwar, devotees chant and scream Bol Bam. It is to keep their journey energetic and pay tribute to the glorifying Bholenath.

The month of Saavan is dedicated to Lord Shiva and people celebrate him and his greatness for entire Shravan month. However, one other significant festival of Lord Shiva falls in the month of February which is known to people as Maha Shivratri.

The month of Saavan holds a special place in the heart of one and all. It is the time when the heat fades because of the fresh monsoon breeze in the country and people get relief from the awful heat from the sky.

Alongside this, the holy Kanwar Yatra of the Shravan Saavan month holds a significant religious belief of people. Especially for Shiva devotees, the month of Saavan brings tremendous elation and bliss.

The festival of Kanwar Yatra belongs to churning of the ocean. The mythological tale behind the celebration of Kanwar Yatra is a testimony of Lord Shiva’s selfless nature. In the tales, all the Gods and Demons gather together to churn the ocean of milk in order to originate Amrit (divine nectar). When the Amrit appears from the ocean it brings along a hazardous Vish (poison). The poison “Halala” is so powerful that it could wipe the entire universe. Thus, all Devas and Demons run to Lord Shiva and ask for help.

Upon this, Lord Shiva obliges to help all Devas and Demons and keep the pot of “Halala” in his neck. As the poison is violent, it makes Lord Shiva’s neck appears blue. This mythological tale derives Lord Shiva’sname Neelkanth.

After this, the poison causes a burning sensation inLord Shiva’s neck so Demon King Ravana offers the holy water of river Ganga to him to relieve the impression. As a result, it lessens the pain and sensation.

Therefore, after this incident, Shiva devotee carries the holy Ganga Jal and travel to the shrine of Bhole Baba to offer him water in the month of Saavan.

Custom and Gala of Kanwar Yatra

The prime custom of the Kanwar Yatra is fetching the holy Ganga Jal and pouring in on a “Shivling”.

In olden time, the only saint performs this holy yatra. In recent days, the Kanwar Yatra holds a strong belief of millions of people. This makes thousands of devotees to come from different areas and offer milk andGangajal on the holy “Shivling” every year.

From the northern parts of India such as Delhi, Uttar Pradesh, Jharkhand, and Madhya Pradesh, young & old people, including women, men, and children perform the Kanwar Yatra and come to Kanwar Mela every year.

In the month of Shravan, streets observe a great number of devotees chanting Bol Bam and Har Har Mahadev. People from different sections of the Indian society perform the tough journey of Kanwar Yatra to make their Bhole Baba happy. Along with this, they have a belief that performing this journey would free them from their problems as Lord Shiva would shower his blessings on him. In India, people have an unmoving faith in Lord Shiva and his selfless love for his devotees & every being.

It is said that one must not carry materialistic comfort with him during the journey to Lord Shiva’s shrine. Also, in the homecoming of the devotees, they believe it is a curse to say no to someone who asks for help or charity. One must not say no to alms while in the return journey.

There are a good number of buses and trains available to reach the temple. Besides this, numerous camps are constructed to avail the Kanwariyas a place to stay and rest during their journey.

Unique Offerings and Dishes on the Occasion of Shravan Month

The month of Saavan is the most pleasant time of the year. At this time, one can enjoy the natural bliss and breeze. However, this is one of the best times for cooking special Indian foodstuff.

The small affair of Kanwar Yatra has taken the form of a grand religious event in the latest years. Today the pilgrimage of Kanwariyas is a popular annual gathering that observes estimate participants of 10-12millions in recent times.

Indian states of Delhi, Haryana, Uttar Pradesh, Madhya Pradesh, Chhattisgarh, Punjab, Rajasthan, and Jharkhand view the most numbers of Kanwariyas each year. And upon this, the government of India avails high-security measures to ensure the security of all the devotees.

At the time of Kanwar Yatra, government aborts the incoming of vehicles on the routes taken by the Kanwariyas. It is one of the grand occasions on which road security measures are on high alert.

According to the Astrology Prediction and Hindu calendar, the festival of Kanwar Yatrafalls on, 17th July and the celebration of Saavan Shivratri fall on 30th July.

These were some essential information about the festival of Kanwar Yatra and you may also like to know about the strangest mythological creatures.

Remedies to Please 9 Planets To Get Rid of Problems
Views: 25493