Hidden Mystery Behind The Number “786” 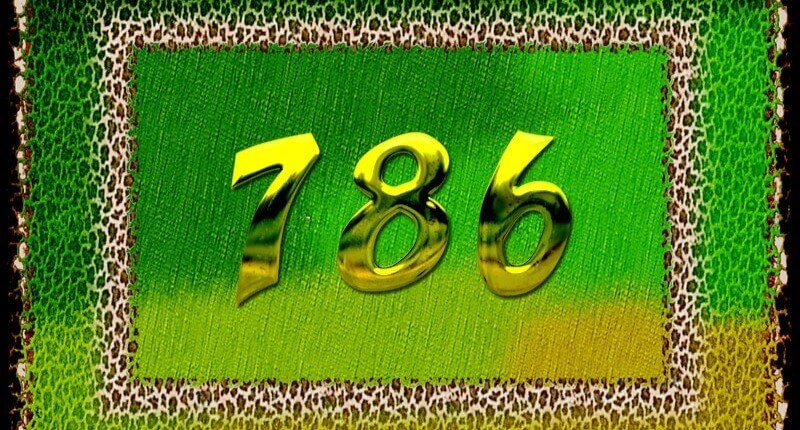 We, humans, have a very interesting nature, we believe in all those things that are somehow related to religion. Its a fact, if you are a follower of a certain religion, you have to agree with every aspect of it. No matter, if that thing is logically true or not, still you need to respect that. In every religion, there are different rituals, customs, facts even certain numbers that hold a very important significance in defining that particular religion. One of them is the number “786” that is believed to be a Holy number in Islam.

Logically if we see 786 is just a natural number that comes after 784 and 785, it is not related to any specific community or religion. In fact, 786 is the area code of Miami-Dade, United States. However, there is a concept going on from centuries that 786 is a Holy number of Muslim but people of other religions also believe in it.

You might have seen many people keeping the series of 786 on their Phone number, number plate of their car and mostly on 500 and 200 rupee notes. Recently, a series of new 2000 currency note starting with 786 is priced Rs. 15 Lakhs in eBay for sale. However, most of the people keep it as a symbol of luck to attract fortune.

786 is an Arabic numeric value that denotes“Bismillah al-Rahman al-Rahim” the opening phrase of the Holy Quran. It translates as “In the name of Allah, the Most Merciful, the Most Beneficent“. 786 is basically driven from the series of Arabic Numerology called “Abjad“.

The number 786 is most popular in the Indian subcontinent where people consider it as Holy or Lucky irrespective of their religion. However, most of the Muslims will not be able to answer, How 786 means Bismillah and how it came into existence. It just because our ancestors considered this as Holy number so we need to believe in it.

Want to know about Astrology and Islam. Click here

The origin behind 786 revolves in the numeric order of the Arabic alphabet which is the substitute to the name of Allah. Likewise in English, there are 26 alphabets from A-Z. If you arrange these letters in numeric order, A will be considered as number 1, B as number 2, C as 3 up to Z that finally gets the number 26. In the same way, the Arabic alphabets are arranged where Alif is ascribed as the number 1 up to Ghayn is ascribed the number 1000.

The order in which the alphabets are arranged is called Abjad. In this method, the letters are arranged in the following order, Abjad, Hawwaz, Hutti, Kalaman, Sa’fas, Qarshat, Sakhaz, Zaza. The arithmetic order of all these numbers is discussed below:

If we add all these numeric values, the sum total would be 786. This is how this number is used as a numeric form of the phrase “ Bismillah al-Rahman al-Rahim”.

The use of Numerology or arranging of numbers is however completely prohibited in Islam. While some part of the Muslim population agrees with the concept of the number 786 and also consider it as a Holy number. Still, many people are completely against it, even they believing in such a practice as “Haram”

According to Hinduism 786 means “Trimurti” that represents Brahma, Vishnu and Maheshwara. Brahma the most superior among Trimurti related to number 7. Lord Vishu “The Preserver” relates to number 6 and accordingly, number 6 denotes to “the destroyer of evil and transformer” lord Shiva himself.

According to Vedic dharma followers 786 means “OM” has a connection with Kabbalah. In one of the books of Rafael Patai, he says that there are few similarities between Tantra and Kabbalah which give an indication that the number 786 gets originated from Hinduism.

There are 3 Lokas in Hinduism, Swarg Lok (heaven), Prithvi Lok (earth) and Patal Lok (below the earth). The heaven where Inder dev resides relates to number 7. It is also believed that any human who follows good deeds will get a place in heaven with Inder Dev.

Number 8 relates to Prithvi Lok which is Earth. It is also called as Mirtyu Lok which means the world of death. It denotes that every person who takes birth on earth has to attain death someday compared to the Swarg Lok. While number 6 relates to Patal Lok which means the surface below the earth. It represents the region of the Nagas, ruled by Vasuki (demons of the serpent).

Hope You liked this article. Also, you may like to read about: WAIT! Do You Invest in Real Estate? Read These Amazing Astrology Facts