The epic saga of Lord Kuber: From thief to a demi-god 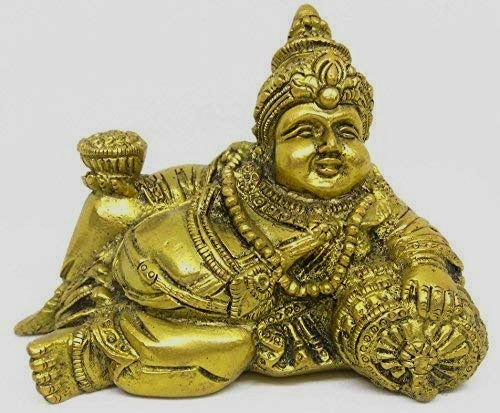 The notorious Kubera is the keeper of the wealth. A blessing by Lord shiva that granted him the supremacy of being called as the “God of Wealth” in spite of intending to steal his temple. We all are aware of the fact that people worship Lord Kubera and Goddess Lakshmi and it is deemed auspicious.

Here is the intriguing tale of rags to riches(if we may say so) or thief to a demi-god.

As written in Shiva Puran, millions of years ago, there lived a poor man named Gunnidhi. He had no money to even buy himself food. Some days, he starved himself to sleep, others he’d rely on the theft.

One night, he entered a Shiva temple with the intent to steal some food. But he was baffled to see all the precious jewels, gold, and valuable things. Suddenly there was a gleam in his eyes and chills down his spine. But like a classic Bollywood film, the diyas inside the temple went off and darkness overspread in the blink of an eye. Gunnidhi tried to light the Diya for light multiple times, but every time the wind would blow it off.

This continued for a while. Finally, he took his shirt off and lit fire to it and made it through. Lord Shiva was impressed with his consistency and the fact that he brought to light in the middle of the darkness. Therefore, he blessed him to be the God of Wealth in his next birth and bringing to us the top-notch example of how easily Lord Shiva gets pleased by his devotees.

All about Lord Kubera

In his next birth, Lord Kubera belonged to the roots of Lord Brahma’s family. He was born as the son of Vishrava and Illavida. Vishrava also married to the demon princess Kaikesi, who then bore four children: Ravana, Kumbhkarna, Vibhishana, and Surpanakha. Legends say that he first lived in Sri Lanka, but his palace was seized from him, by his half brother, Ravana. He also took away Kubera’s magic vehicle Pushpaka Viman and banished him from Lanka.

Lord Kubera, is said to have performed austerities for 1000s of years. In reward for which the boon from his last life came into effect, bringing to him immortality and making him the god of Wealth & guardian of all treasures of Earth.

Thereafter, Vishvakarma, the divine engineer of the universe built him a new domicile called “Alaka”. He resided in a beautiful mountain residence near Lord Shiva’s abode on Mount Kailash.

In Hindu culture, as we consider Lord Kuber as the god of wealth, likewise according to Feng Shui, the Laughing Buddha is considered to bring auspicious energy, wealth and joyful blessings if it is placed anywhere in the house. Click here to read about Feng Shui secrets to attract wealth and peace.

On the occasion of Dhanteras, Kuber pooja is performed with the intention of gaining legitimate wealth and richness. Those who are involved in business and seek growth or are facing financial issues or crises must perform the pooja to attain prosperity, wealth and happiness. Kuber Puja is done only once in a year and for this Pooja, Dhanteras is the most auspicious day. Book your Dhanteras Kuber Puja Now!

Dhanteras has deemed to be the most important festival dedicated to Lord Kuber. Devotees perform Kuber Lakshmi puja and buy gold on this auspicious day.

If you chant this mantra for genuine purposes and with a full heart, Lord Kuber shall shower all the blessings to fulfill your desires and free you from debts or finance-related crisis.

If you want to attract wealth, prosperity and materialistic abundance then Kuber Yanta is something that you need in your life. you can buy it for yourself, any friend or even for your family.
Astrotalk brings to you the most powerful Kuber Yantra available. Get your Kuber Yanta Now!

If you fancy reading about mythological tales, Click here to learn about the most stunning, absurd Ramayana facts including Why did Lord Rama touch Ravana’s feet? Ravana- father of Sita? Be prepared to get shocked with the reasons!

Understanding the Savagery of an Aries Woman
Views: 9964