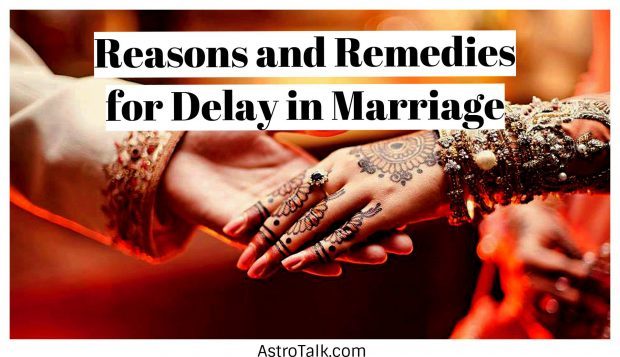 Marriage is a union of two individuals as husband and wife for a lifetime, so that they can pursue dharma, artha and kama desires. It joins two families together. Beliefs are that an individual’s birth chart/Kundli fore decides the time of his/her marriage on the basis of the various planets and their movements at the time of one’s birth.

Besides, Both planets and houses play a significant role in the delay of marriage. Amid all the planets, Sun, Saturn, Mars, Rahu Ketu contributes the most in delaying marriage. 7th, 8th, and 12th houses are the most notable in the process of Marriage delays in a native’s So, In order to ascertain the reasons for delayed marriage, we discussed this subject with some of the finest astrologers of our country.

According to Expert Astrologer Dr. Anshumali Tiwari, some of the most common for delays in marriage are the following planetary positions.

Reasons for the D in Marriage

In the horoscope of the native, if the planets like Rahu, Ketu, Mars or Sun resides in 7th house or aspects 7th house, it indicates in marriage.

Relation of Saturn with 7th house-

If Saturn is situated in 7th house or is aspecting 7th house by itself being situated in 1st, 5th or 10th house, delayed matrimony is indicated.

Delay in wedding is also indicated if the lord of 7th house is in conjugation with Saturn or planets like Rahu, Ketu Mars.

Unfavorable position, weak position or debilitation of the lord of 7th house-

In the Kundli of the native, if the lord of 6th house is situated in such a way that it is either related to the 5th house or to the lord of 5th house and vice versa, it also detains the marriage. In the same line, if such a relationship is formed between 7th-8th,  6th-7th, 5th-6th-7th, 6th-7th-8th, 5th-7th-8th house/house lord, in tying ts is indicated.

All these planets, besides the lord of 7th house, generally considered responsible for marriage and in the Kundli, the position of these planets in , 6th, 8th, 12th house represents delayed marriage.
(Note: Sun, Mars, and Saturn are benefic in 6th house, on the conditions that it is not the lord of 7th house but if it happens so, (5) is applicable.)

As stated by Expert Astrologer Lovenish Sharma In the 12 houses/division of a birth chart, the first one(Ascendant) and its swami (Lord pf Ascendant) information about the native. And the house opposite to it also called 7th house is the house of native’s partner – life or business.

Remedies for in Marriage

and another mantra to overcome delay in marriage is:

If the planet is not debilitated in the natal chart as well as the Navmansha chart. Gemstone of 7th house can be provided.

Keep Fasting of Mondays and Friday as per the position of the significator planet.

In case, native feels obstacles in marriage due to Manglik Dosha. One can do Chandika Stotram on Tuesday and read Sunderkand on Saturday to remove all hindrances in marriage.

Native can plant a banana tree outside their home or a nearby Garden and give water daily. They must avoid consuming salt on Thursdays and praise Lord Vishnu for fulfilling their wish and give partner.

NOTE- If there is no combination of delay in marriage in the birth chart and still native is not getting married. Then, Vastu could be the reason. Provided that the South-West portion of the house/building is extended, this might result in delayed marriage.

Nonetheless, powerful astrological remedies for delayed marriage can be determined through insightful analysis of the native’s birth chart. Consult the expert astrologers of Astrotalk for a personalised solution to all your concerns.

Understanding the Savagery of an Aries Woman
Views: 9964