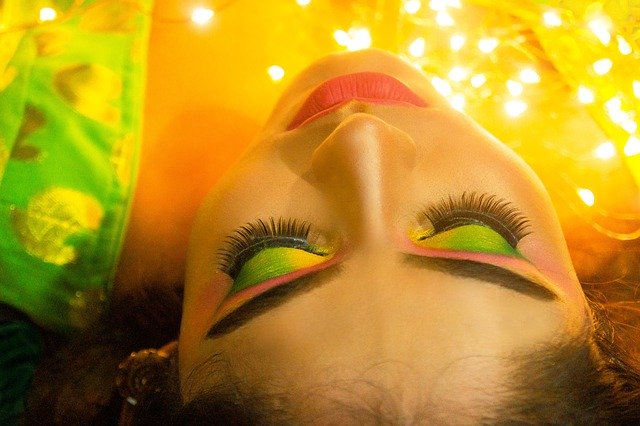 The origin of the word “Bindi” is from the Sanskrit word “Bindu”. It symbolizes the third eye of Lord Shiva. The married women consider it very crucial to place bindi on their forehead. Also, it brings wealth, peace, and prosperity to the family. Bindi is symbolic of Trinetra i.e. the three eyes of Lord Shiva. The sun and the moon are considered the two eyes which see the past and the present. However, Bindi is considered symbolic of the third eye which can foresee the upcoming troubles of the future.

Sindoor symbolizes the married life of a woman and is significant in many cultures of North India. It is filled in the maang of the bride by the groom during their wedding. The married woman fills it in their maang for the long life of their husband. Moreover, it keeps the Sahchakra of a woman active. It keeps a woman attentive and gives her courage and power to think and fulfill her duties wisely.

It beautifies the eyes. However, apart from adding beauty to appearance, it also protects the bride and her family from the evil eye. According to beliefs, Kajal protects a woman from negativity and ward off the evil eye. Also, it prevents various ailments related to eyes. As it is said, “Eyes are the window of one’s soul” Hence, It depicts the love and care of the wife’s heart through her eyes.

In North India, generally during wedding bride is dawned up in a red-colored lehenga having zari or gota work. The yellow and red colored saree is preferred by brides of Eastern India. Similarly, a Maharashtrian bride would prefer a green colored saree as a green color has special significance in Maharashtra. Holy texts state that red color is an auspicious color. It brings good luck and fortune and drives away the obstacles. Hence, the red-colored wedding dress, red sindoor, etc. are preferred in weddings.

The beauty of a woman is considered incomplete without the presence of aromatic gajra in the hair of women. In Southern India, women usually prefer the one made of Harsinghar flowers. As per the beliefs, the gajra is symbolic of the calm and peaceful nature of a bride. Also, it depicts freshness. The wedding is a stressful situation and hence many thoughts churn in one’s mind. However, it helps to keep all the negative thoughts away.

The maang tika, along with the sindoor adds to the beauty of the bride’s face. Newlywed generally adorn their forehead with it. Moreover, this jewelry is worn in the center of the head as it guides a bride that she had to walk on the straight and right path after marriage and make all the crucial decisions without being partial. It is symbolic of fame and good luck. Also, it symbolizes that a bride always respects her elders.

The brides generally wear it after taking the seven vows around the holy fire. It holds a belief that it maintains the good health of a husband and brings prosperity. It is worn in honor of Lordess Parvati. Also, it is believed that widows should wear it.

It is almost mandatory for married women to wear earrings. As per the belief, it is a symbol that a bride will neither say nor listen to ill tings about her new family. The earrings have a direct connection with the health of the women. It also enhances the beauty of women

This beautiful neck jewelry symbolizes the married life of a woman. The groom makes the bride wear it during the wedding. It ensures the longevity of the husband. The mangal sutra attracts positive vibes and keeps the mind calm and composed.

It is similar to a bracelet but is worn on arms. A belief states that by wearing it, a woman welcomes the wealth and prosperity in her home and wards off the negativity. This jewelry boosts up the energy level in the body. Also, it maintains a continuous flow of energy.

Since ancient ages, bangles hold a special significance in the life of a married woman. Hence, it is an important part of the Solah Shringhar. Bangles are symbolic of good luck and fortune. They have a direct connection with the moon planet in one’s horoscope. The women wear it for the long life and good health of their husbands.

It is an important jewel included in shringhar. A ring ceremony is also conducted before the wedding. The ring demonstrates the deep love between the couple. It also keeps the old memories fresh and their love young forever.

This silver or gold piece of jewelry makes a woman look even more attractive and is hence a part of solah shringhar. Also, she hangs the keys of the home in it hence depicting she is the owner of the home now. For married women, the Kamar band is considered essential. It is even more auspicious if made of gold or silver.

It is a traditional jewel adorned on the fingers of the feet of a married woman. It is a tradition being followed since ages. Moreover, it is considered auspicious for women to wear it. This is because it maintains the good health of women and brings prosperity at home as well.

The melodious sound of this jewel fills the newly wed’s home with a positive and happy aura. It is considered auspicious and brings wealth and prosperity at home. Moreover, the bride is considered the Lakshmi of the home. Hence, wearing Payal is considered lucky and it also wards off the negative vibes.

Also, you may like to read Vastu tips for children room

Vastu Tips for Living Room- Give Your Home a Touch of Fortune
Views: 1691

Rakshabandhan Special: What type of sister you have?
Views: 1073

Trust Issues- Zodiac Signs That Have a Hard Time in relationship Due to It
Views: 2448