Top Bollywood Actors Net Worth: Is Your Favorite One in The List?

Top Bollywood Actors Net Worth: Is Your Favorite One in The List? 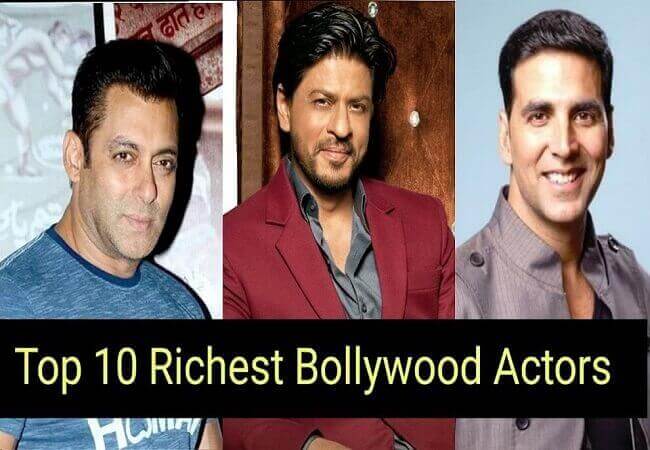 Bollywood also known as the Hindi Cinema is a land of dreams for many. Many aspiring youngsters come to Bollywood from their hometown with lot of ambitions and strive their way to the success.

Since 1970’s, Bollywood has been providing with public with lot of leisure and masala films. Having the large volume of film producers, Hindi cinema knows how to keep the audience entertained and hitched to their seats.

If you are a Bollywood movie lover, then you know Bollywood film makers produce movies in all kind of genres like romance, acting, comedy and melodrama. Here’s a list of top 10 Bollywood actors and their net worth globally.

When it comes to richest Bollywood Indian actors, our most loved King Khan tops the chart. With his first movie, “Deewana” where he garnered a lot of public action.

Since then Shahrukh Khan has been winning hearts by his noteworthy performances. He is also globally known as the King of Romance, from his famous “Dilwale Dulhania Le Jayenge”

Being one of the richest actors in world, till date his net worth is $600 million dollars. According to the latest reports, SRK is now the 2nd richest actor in the world and currently have more than 30 endorsements, an IPL team and a well-established production house in hand. The actor charge Rs. 50-60 crore per film.

According to astrology predictions, Shahrukh’s upcoming Bollywood movie “Lands of Lungi” will be a big hit, with favorable planets at the time of his launch.

Salman Khan is one of the Indian actors, who knows well how to turn his film into major blockbuster. Power packed with lot of charisma and makes a very strong on screen presence.

Having a crazy fan following, the actor is also famous for having one of the best physiques in the Bollywood industry. Most youngsters look to Salman Khan as their ideal. Salman Khan charges Rs. 60 crore per film.

Having such a massive fan base, by 2019, his net worth is $310 million dollars. His movies always hit the 100-crore club, and the actor’s stardom always attracts

After garnering the attention of the Indian population, he also has a massive fan following in Asia. He is all set to launch his next movie “Dabangg 3” launching in December this year and “Kick 2” which a scheduled for the next year.

With the recent release of his blockbuster film “Kabir Singh”, which has made a remark of 200 crore in the box office. His recent hits in the past few years like, “Padmaavat”, “Jab We Me”, “Udta Punjab” and“Vivah”, also attracted a lot of public eye.

However, with gigantic appreciation in his movies, success did not come easy for him. With a magnetic charm and splendid style of dancing, he is also one of the best dancers in the Hindi cinema. Shahid Kapoor charges Rs. 30-40 crores per movies.

According to the latest media reports, his net worth is $35 million. Shahid’s upcoming Bollywood movie will be Farzi, which will be surfacing the industry by November, 2019.

Taapsee Pannu is an Indian actress, has worked in various industries including Hindi, Telegu, Malayalam and Tamil. In the year 2011, she released 7 movies in a row and became of the few south actresses who set a benchmark with maximum releases in an year.

The Bollywood actress acquired a lot of success with her last year release “Soorma”, where she did a biopic on the life of International Hockey Player Sandeep Singh. Taapsee Pannu charges 1.5 per movie.

Taapsee Pannu has also established herself as a youth icon and people massively follow her style mantra. Her next Bollywood release will be “Mission Mangal” to be released on August, 2019. Till 2019, her net worth is $6 million.

The actor is said to have one of the most charismatic face with a breath-taking personality in the Hindi cinema. He reaped appraisal and appreciation from his back to back recent Bollywood hits in a row.

His latest movie, “Article 15”, also acclaimed him a lot of success in the industry. With noteworthy performances in his movies, he is also known to be very selective with his movie scripts. He is also a style icon for many youngsters.

Last year with his latest releases, “Andhadhun” and “Badhai Ho”, he became a trend in the industry. The actor solely made a record of breaking the 300 crores club, ruled by the Khans. Presently, Ayushmann Khurana charge a fee of Rs. 15-20  crore. His current net worth is US$6 million.

Also known as the “Desi Girl” of Bollywood. The diva recently joined the “2019 Instagram Rich List”, and become only Bollywood actress from country from India to be in the list other than Virat Kohli. With excellent acting skills and a charismatic personality, the actress is having over 43 million Instagram followers, much more than the current Indian celebrities have.

Chopra acclaimed success with the past movies,“Fashion”, “7 Khoon Maaf”, “Barfi”, “Mujhse Shaadi Karogi”, “Krrish”, and various others. Winning Miss World in the year 2000, also garnered her with a lot of appraisal and she emerged herself as a prominent style icon with a magnetic charm for many.

After claiming enough success in the Hindi cinema, she soon made her mark in the Hollywood industry with “Baywatch”. She currently charges Rs. 16 crores per movie.

Her upcoming Bollywood release will be “The Sky Is Pink”, will be releasing in October, 2019 this year. According to the latest media reports, by 2019, her net worth is $28 million.

Rajkummar Rao is an Indian actor who is prominently known for his work in the Bollywood cinema. In the Bollywood industry, with average looks he made his mark to the audience hearts with his prodigious acting abilities.

Changing his name according to the suggestion of her mother on the basis of Numerology, is a lesser known fact about him. With several blockbuster Bollywood movies, he also received several awards for his acting like Filmfare Awards, National Filmfare Award and Asia Pacific Screen awards.

With several movies like “Stree”, “”Kai Po Che” and “Talaash”, he launched himself in the list of top India actors. He currently charges Rs. 10 crore per movie. Till date 2019, his net worth is $11 million.

Ranveer Singh is an Indian actor who is known for his significant work in the Hindi cinema. With delivering power packed performances and selection of excellent movie scripts, the actor is said to have made remarkable performances in his movies till date. His debut movie “Band Baaja Barat”, was produced under the banner of Yash Raj Films.

Ranveer Singh major hits are “Padmaavat”, “GoliyonKi Rasleela Ram-Leela”, “Bajirao Mastani”, “Simmba”, “Gully Boy” and several others. His upcoming film is “83” and “Sooryavanshi”. His charges Rs. 20 crores per film. Till date 2019, his net worth is $1.5 million.

Akshay Kumar is an Indian born Canadian Actor,who works in Hindi Cinema. Success did not come easy for him, he strived for it and made his remarkable presence.

Also known as a fitness freak, the actor has been a martial arts teacher in his modelling days. After his first release in 1991, “Saugandh”, which turned out to be a blockbuster hit. He received several appraisals with his unmatchable acting skills in the later years.

The actor gave in numerous box office hits like “Rustom”,“Kesari”, “Airlift”, “Toilet : Ek Prem Katha”, “2.0” and several others. His upcoming Bollywood movie are “Mission Mangal”, “Suryavanshi”, “Laxmmi bomb” and several others. He currently charges a hefty amount of Rs. 45 crores per movie.Till date 2019, his net worth is $150 million.

Deepika Padukone is an Indian actress who is widely known for her captivating looks and fascinating personality. After her debut in“Om Shanti Om”, where she made debut opposite the King Khan, there was no turning back for the actress.

Deepika Padukone’s major blockbuster hits are “Chennai Express”, “Goliyon Ki Rasleela Ram-Leela”, “Yeh Jawaani Hai Deewani”, “Piku” and several others. As per the latest media reports, she charges Rs. 17 crores per film. Till date her net worth is $16 USD.