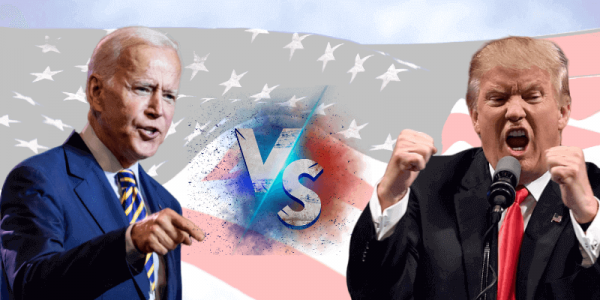 Last time in 2016 Election, Hilary Clinton was defeated giving a tough fight to Donald Trump. In the 2020 Elections, Joe Biden is leading from Democratic Party and Donald Trump is already standing as a front figure from Republican Party.

However, there are no formal dates regarding the establishment of Democratic and Republican. So, here we will analyze the Horoscopes of Joe Biden and Donald Trump.

Trump was born on the day of a lunar eclipse. In Trump’s horoscope, Sun and Moon are in conjunction with Rahu-Ketu.

During the 2016 Election, Sun is in 10th House which is affected by Jupiter. It creates Raj Yoga in Trump’s horoscope. After getting elected as US President, Trump got Maha Dasha of Jupiter, which proved to be very auspicious for him.

Further, Jupiter was very well placed in the 2nd House. As a result, no one can deny that the US economy achieves a massive rise of around 3% in Trump’s government. Also, the unemployment rate touches the lowest of around 3.7%.

However, from mid-2018 Saturn starts casting a shadow on 12th House. 12th House is the house of losses. In this malefic period, Trump takes a great amount of criticism a lot due to the US-China Trade War and, decisions on immigration policy, etc.

In the period of January 2019 to July 2021, Vimshottari Dasha (the result of Jupiter-Saturn) must be pointed. Saturn in the 6th and 7th House may result in a war situation. Bad relations with Iran, will affect Trump’s election campaign very negatively.

Joe Biden is the front face of the Democratic party. He also served as U.S Vice President from 2009 to 2017. Biden’s horoscope is of Scorpion ascendant. Jupiter and Moon are in the same position together in the center, which results in the formation of strong Gaj Kesari Yoga.

Vimshottrai Dasha in the year 2009, make it possible for Biden to be elected as vice-president. This time again during the time period of April 2020 to September 2022, Vishmottri Dasha will result in giving Joe Biden a very strong fight to Trump.

Mars as the 6th and ascendant lord is in the 12th House and mutual conjunction with Moon will result in Raja Yoga.

Mercury being lord of 8th House is present in 12th House. 12th House is House of Gains. As a result, this astrological combination will help Joe Biden during the last phase of the US Presidential Election, to impress people in political debates and overall campaign.

By the way, elections in a democracy are totally based on people’s votes and people’s trust in their representative and it matters the most. However, this article is based on astrological predictions, thus, it can be concluded that:

At the time of US Presidential Election 2020, Biden would be influenced under Jupiter-Rahu Vimshottari which is promising a victory.

In Trump’s horoscope, cancer is getting the aspect of Moon. It reflects Trump as a tough competitor. However, no sign of victory is there.

Also, you may like to read: Delhi Assembly Election 2020: Astrological Prediction