The Dead Sea- Can people Really Float on it? 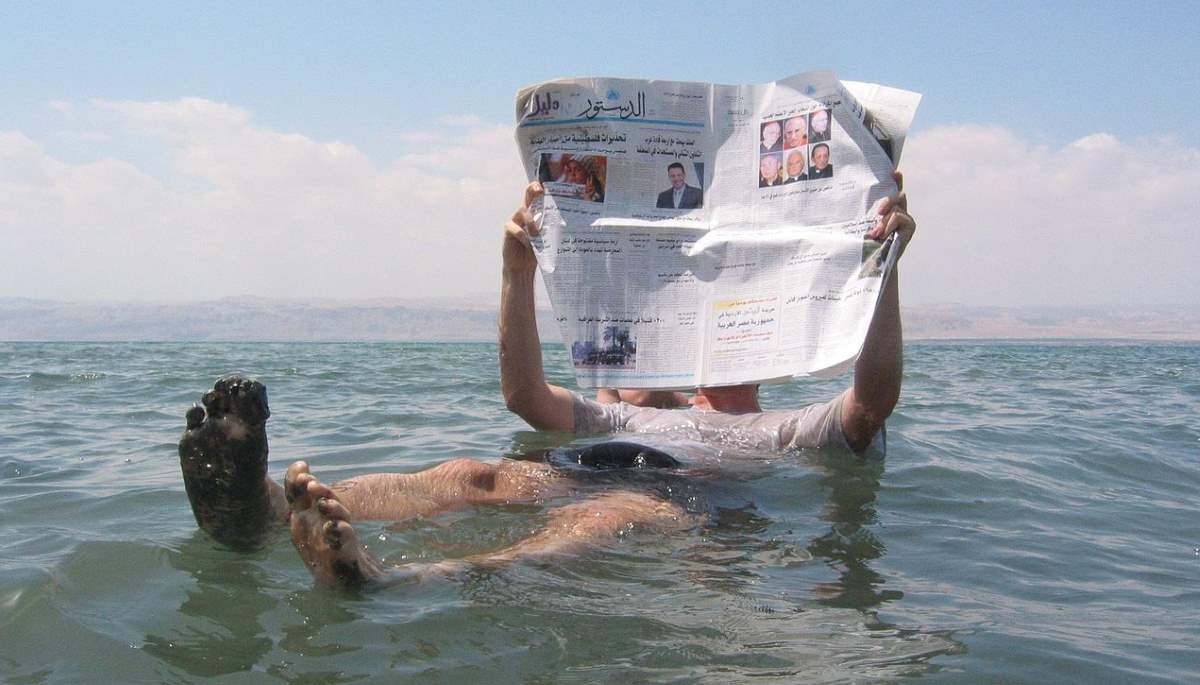 What if I will you, “you can float on water“. Funny isn’t it! However, it is true there is a place where you can actually float on water. In fact, you can swim in it without drowning. Such strange things always fascinate us and we want to know more about the. So in this context lets talk about a one of the mysterious places The Dead Sea- Can People Really Float on it.

The Dead Sea is basically the lowest point on Earth at 430.5 meters below sea level. It is an unusual and mysterious looking lake with crystals of saltwater coming out of it and golden-brown hills surrounding from all sides. It contains such concentration of salt that people can easily float in it.

Dead Sea is also known as “Salt Sea” or “Sea of Death“. It is located in the Jordan Rift Valley between Israel to the East and Jordan to the West. It is 377m deep which makes it the deepest Hypersaline lake in the world. A hypersaline lake is a water body which contains huge amount of sodium chloride. However, other mineral salts can also increase the salt density of an ocean or sea. All these things make the Dea Sea world’s saltiest water body on earth. Although there are other many other lakes like Lake Assal (Djibouti), Garabogazköl, McMurdo Dry Valleys of Antarctica etc. However, their density of salt is very much less than the Dead Sea.

The Dead Sea 8.6 times more saltier than a normal ocean. This high salinity prevents aquatic organisms such as fish and aquatic plants from living in it. However, a very little quantity of bacteria and microbial fungi are present in the sea.

What Makes Dead Sea so salty?

The Dead Sea is a closing point for rainfall and surface water. Every year it receives a tremendous amount of rainfall. The water flows into it but doesn’t flow out and as a result, it evaporates. Moreover, the water is losing its H2O content continuously from last 65,000 years. However, the minerals are becoming more and more concentrated which is the main cause of its saltiest behaviour.

The Dead Sea’s earliest known name is recorded in the Hebrew Scriptures, where it is referred to as “The Salt Sea“.This name was given due to its unique character and significantly high salt content, which makes it a source for rock and sea salts. If we talk about the past, the Dead Sea was It was one of the world’s first health resorts (for Herod the Great), and it has been the supplier of a wide variety of products like balms for Egyptians. However, it’s salt content was also used for medical purposes.

Apart from its salt behaviour, the Dead Sea is a famous vacation spot for the tourists. People of Israel usually come here to enjoy the medical properties of water and spend some time to experience unique sea and surroundings. People cover themselves in the mineral-rich mud and float in the salty waters on the Beaches of the sea. The dead sea is famous for two major attractions Masada and Ein Gedi. These two places are located aside of the Dead Sea and people usually visit them whenever they plan a trip to this mysterious place.

There are many other strange and unusual places on earth like  The Banff Springs Hotel, Canada, Transylvania, Romania etc. All these places have a unique story of their own. However, we should take out some time from our busy schedule and read about them as well.

These were some major details regarding the Dead Sea. Also, you may like to read about: मोबाइल नंबर- कैसे नंबर आपको सफलता की ओर ले जा सकते हैं