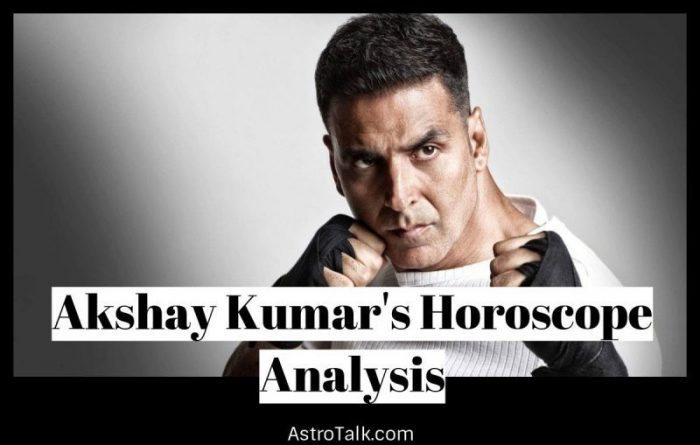 Akshay Kumar, aka Khiladi of Bollywood is a real story from rags to riches. This guy rose from scratch. From cramped streets of Chandni Chowk to being a chef in Bangkok.  He is the only Indian actor to feature in highest paid actors list. In Forbes’ list of World’s Highest-Paid Celebrities of 2019.

Akshay has spent many glorious year in the Indian Film Industry and never once has he stopped being the inspiration of many. Be it for his sporty personality, hard work, or his uncanny abilities to motivate people.

Akshay achieved it all without any godfather (as they say it) in the industry. He truly  is the embodiment of what a person can achieve with determination and continuous hard work.

Planetary combinations in his birth chart

Ascendant of Akshay Kumar is Scorpio. And Lord of Scorpio, Mars is viewed in his charts. A strong Mars in the is very auspicious. Clearly contributing a lot to Akshay’s personality making his full of energy and that not a single person can deny in case of Mr. Khiladi. This placement of Mars is making a Panch M Yoga called Rochak Yoga.

The highlight of his Kundli is the placement of Mars in its own sign in Scorpio Ascendant. Mars, being the commander in chief in the planets cabinet makes him interested in physical activities and the fact that he even got his education in martial arts. Another auspicious placement is of Sun its own sign in tenth house.

On top of that, so many other auspicious combinations form in Akshay Kumar’s birth chart. Including Exalted Jupiter which gives wisdom to the native is one of the best positions of Jupiter, being present in the sign of Cancer. Sun here is in own sign i.e., Leo, it blesses the native with good name, fame and respect.

Exalted Mercury in its own sign, i.e., Virgo, makes the person master in various disciplines. The self-made man has made it to the top purely with the firmness of his hard work and mastery over different areas of life.

After studying martial arts in Bangkok he worked as a chef and waiter. Mercury, itself being the significant of communication makes Akshay Kumar an impressive orator.

Exalted Mercury in its own sign, i.e., Virgo, makes the person master in various disciplines. The self-made man has made it to the top purely with the firmness of his hard work and mastery over different areas of life.

After studying martial arts in Bangkok he worked as a chef and waiter. Mercury, itself being the significator of communication makes Akshay an impressive orator.

If we talk about the transformations in his life, we can see, lots of things and considering many combinations. Likewise, Saturn (representing profession) is trine to Mars and Jupiter, meaning there was/is complete influence of these planets on his profession.

Saturn + Mars defines his education in Martial art, and the fact that he had to face complications in his career at initial stage. Due to Jupiter, he earned wisdom in every profession he got into, even before debuting into the film industry.

The presence of Rahu in the sign of Aries is representing camera, media and film industry makes him irresistible to this industry. Being the biggest reason, he eventuated with a career in the same field.

Further if we looked at his career growth, his growth accelerated after his marriage, Venus being the reason. His horoscope project a combination of Venus and Sun. When his marriage took place. Combination of fame and respect in his charts boosted. Thus providing them with immense success.

Exalted Jupiter makes him an ethical person. Humanity and values doesn’t come easy with all the fame and wealth but Askhay Kumar kept himself rooted and down to earth.

With a heart of gold, he does not hesitate in donating his wealth in some critical issues for the welfare of the country. He donated the highest amount last year. Even during Chennai floods, the actor contributed an amount of rs. One crore to help.

Additionally, Akshay Kumar has even launched the “Women’s Self Defense Centre” in Mumbai itself, where various trainers provide free martial arts training to women in order to teach them the art of self-defence.

Not to mention the fact that this guy is an all rounder who possess a variety of diverse skills. Discipline, focus and hard work being the true key to his success, he touched the sky.

Do you too wish to know what Future has in store for you? What kind of job would you end up in? Will that relationship of yours end up in marriage? Click here to consult the expert astrologer Lovenish Sharma and seek his guidance.

You would also want to read about the astronomical reasons behind the massive fan following of The Global Icon – None other than Priyanka Chopra.

Are you curious to figure out your own birth chart? Or maybe you want to become an astrologer. Click here to learn basic Vedic Astrology in minutes.