Importance Of Wearing Mangalsutra In Hinduism 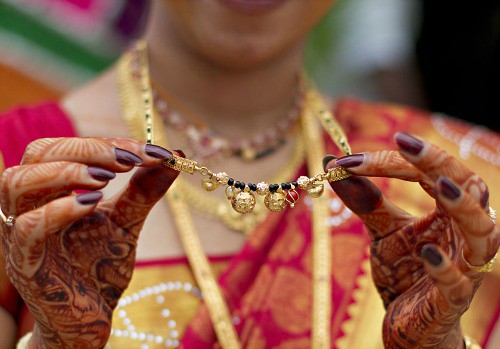 Indian women and their bend towards stocking up jewellery, especially gold jewellery, is world-known. And Mangalsutra makes a necessary share of this piling. Wore around the neck, in Hindu dharma, Mangalsutra is considered as Soubhagyalankar. Here, Soubhagya, like you might have heard, is the marital status of the woman, while Alankar means ornament. In Hinduism, the word Mangalsutra is the amalgamation of two words, ‘Mangal’ meaning ‘auspicious’ and ‘Sutra’ meaning ‘thread’ or ’cord’. The groom, while performing the marriage rituals, ties the auspicious thread around the neck of the women, which denotes the beginning of an eternal bond between the two.

The word Mangala in astrology also stands for the planet Mars, also known as Red planet. Mars and the bride’s garment share the same colour i.e. red. It is because of this association, it’s common to use coral gem (manga) that is sacred to Mars. Mangalsutra chain, on the other hand, is made of black glass beads (Kala pota). The black beads are said to repel the evil eye. They are supposed to keep at bay the distressing vibrations and negative energy from the bride and her family.

Mangalsutra designs over time and with cultural up-gradation have changed a lot. While the cord of the Mangalsutra today can and is also made of gold wire but in earlier times, it compulsorily has to be a combination of 108 (a lucky number) fine cotton thread dyed in yellow colour. Even today, some states in South India follow the old school way for it is widely believed that the ritual of Mangalsutra originated in South India and North states adopted the same.

Besides the thread, the pendant that the Mangalsutra entail has also changed a lot. Earlier, the pendant used to be a pair of two gold cup-shaped art pieces but today, the pendant is usually made of diamonds with all sorts of creativeness intact.

Mangalsutra, in Hindu traditions, makes one of the five signs of marital status. The other four are toe rings, Kumkum, bangles and a nose ring. Of these five, Mangalsutra is the most important.

To better understand the importance of Mangalsutra in Hinduism and astrology, we have divided this blog into several parts explaining each and every element of the jewellery separately .

If you wonder why there are two strings in a Mangalsutra, it’s simply to signify the union of Lord Shiva and Goddess Shakti and their principles. To lead a successful life, the principles of Shiva and Shakti are merged. Here, Shiva himself is the doer and Shakti allows the strength to his actions. And this is how karma becomes akarma, thereby achieving the desired Chaitanya-oriented result.

The whole Mangalsutra chain is divided into seven sections. These sections denote the seven Chakras in our body. Further, the nine beads on the string in each section denote the nine forms of Adi-shakti. This pattern, strung in golden thread, bars the evil vibrations from coming closer to the woman’s body and eliminates them if they do.

Also, if you carefully scan the Mangalsutra string, you will notice that the void created in the segment of the two strings of black beads is rectangular. The rectangular shape is said to attract the waves of ichha-shakti in a human. It helps a woman in fulfilling her desires.

Cups or Pendant of Mangalsutra

Mangalsutra designs are a combination of two strings and also a pendant. These pendants come in all shapes and sizes today. However, in Vedic science, the most accepted one is with two cups shaped mangalsutra pendant.

When a woman wears a mangalsutra, the void or the depth of the cups face the chest aka Anahat-chakra. This helps in the attraction of the Dnyan-shakti. To further attract higher-level sattvik vibrations, two spherical gold beads are also embedded between the cups.

Also Read: Each Zodiac Sign Is Either Water, Fire, Earth Or Air, Do You Know What’s You?

If you carefully analyse the Mangalsutra design, you will also find flower cravings with four petals on the upper side of each cup. This placement produces a protective cover around the Anahata-chakra. The protective covering comes into effect by the discharge of kriya-shakti vibrations through the petal tips. The absence of any sort of design on the cups is recommended because it allows better flow of Chaitanya and helps in protecting the woman from negative energies.

Mangasutra does not only protect the lady in the house from intangible forces but wearing Mangalsutra also allows various health benefits. The pendant in Mangalsutra, when worn in a way that it reaches the bride’s Anahat Chakra, keeps the heart healthy and negative energies at bay. This is due to the healing properties of Gold.

Gold, when kept closer to the skin, attracts cosmic waves and supports healthy heart and body function. Moreover, the black beads, owing to their piousness, keep negative energy at bay and reduce pain and restlessness in a person. It simply keeps the woman positive and happy.

Astrologically, the best day to buy a Mangalsutra is on Thursday or Friday. You can also consider purchasing a Mangalsutra on 3, 12, 21, 31, 6, 15 and 24 of any month. The 24th of any month is one of the luckiest days to begin a new task.

Buying Mangalsutra on the above dates will protect the couple from evil-eye. If a woman wears Mangalsutra according to her zodiac sign, it can be auspicious in terms of loyalty, commitment and love between husband and wife.

Can I wear Mangalsutra Bracelet?

In astrology, our expert astrologers tell us that the Gold (usually the pendant) has eternally been under the influence of planet Guru, aka Jupiter. Jupiter is also associated with Lord Vishnu and another name of Lord Vishnu is Pitambardhari. The Jupiter planet symbolises prosperity, wealth and knowledge in your marital life. Moreover, the black beads in the jewellery symbolize planet Saturn.

The planets Jupiter and Saturn can together add stability and sincerity to any relationship. So with the combination of Guru and Saturn, the Mangalsutra acts as a symbol of your future relationship. And the fact that bracelet Mangalsutra have got both these elements, so the benefits of Mangalsutra remain the same even in bracelet form.

What happens if Mangalsutra Breaks?

Is Mangalsutra breaking bad? Well, the perception about Mangalsutra breaking that the Indian daily soaps might have created in your head is absolutely *drum-rolls* wrong. Breaking of Mangalsutra is simply an accident and must be treated like one. All the fuss and chatter around Mangalsutra breaking being a bad omen is nothing but one’s subconscious trying to associate the sacred thread with God and thus making us think it’s some kind of negative signal from God.

Understand it this way, what if a small child lays his hand on the priceless commodity that Mangaslsutra is and accidentally breaks it? Would you consider it a bad omen? To assure you, even our expert astrologers believe that breaking of Mangalsutra is a completely normal affair. So don’t blame it on bad luck or evil. Mangalsutra is there to protect you from evil and not the other way around.